Pakistan-Occupied Kashmir would not have come into existence had Jawaharlal Nehru not declared untimely ceasefire with the neighbouring country, Union Home Minister Amit Shah said on Sunday. 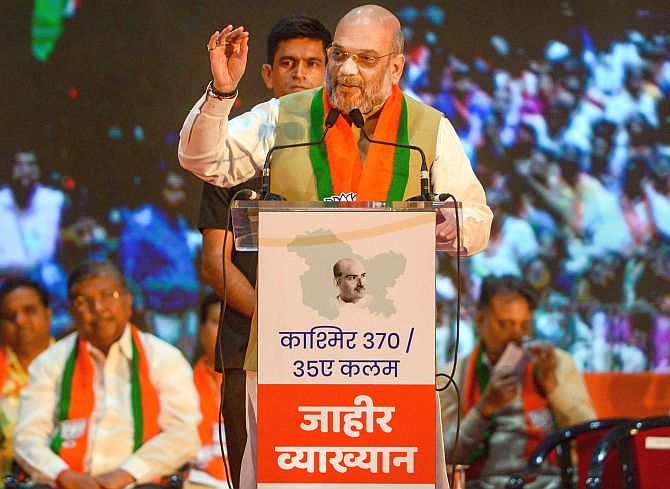 Targeting Nehru over "non-integration" of Kashmir with India, he said Sardar Vallabhbhai Patel, the country's first home minister, should have handled the issue, instead of the then prime minister.

Addressing a rally in Mumbai on the Centre's decision to abrogate Article 370 in Jammu and Kashmir and to campaign for the Bharatiya Janata Party for the next month's Maharashtra assembly polls, he said, "I want to tell all BJP workers that our work doesn't end at the removal of Article 370, our work starts now."

"It is our target to take this country forward on the chapter of nationalism and progress," he said.

Hitting out at the Congress and Nationalist Congress Party, he said, they were "shamelessly" opposing the abrogation of Article 370.

Expressed confidence that Devendra Fadnavis will again be the chief minister after the Maharashtra polls on October 21, he said, "I am happy that the campaign for the state polls is beginning with the discussion on our decision to remove Articles 370 and 35(A)."

The Congress sees politics behind Article 370 abrogation, "we don't see it that way", he said.

"The PoK wouldn't have come into existence had Nehru not declared untimely ceasefire with Pakistan, a mistake of Nehru... Sardar Patel should have handled Kashmir, instead of Nehru handling it," he opined.

Nehru then went to the United Nations under Article 35 of the UN Charter. "Had he gone through charter 51, still PoK would have been with India," he added.

"After Sardar Patel's death in 1950, the Indian government signed the Delhi agreement with Sheikh Abdullah which became the foundation of Article 370," he said.

Those who came from Pakistan to India, two of them -- Manmohan Singh and I K Gujral -- (later) became prime ministers, while L K Advani became deputy prime minister.

"But those who went to J&K never had voting rights till Article 370 was removed. Today, these people can vote," he said. 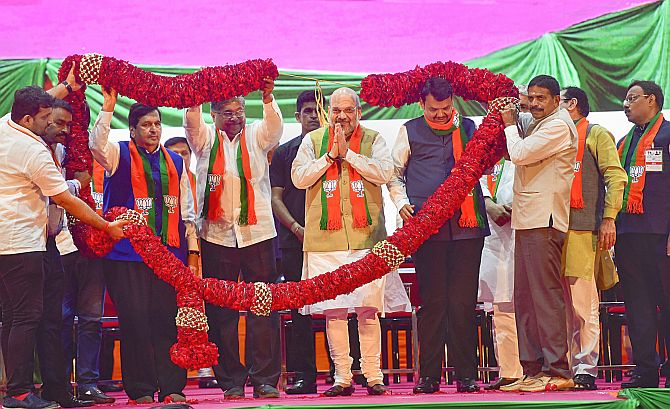 Shah said Congress leader Rahul Gandhi he has been demanding proofs of the government's works, including surgical strike and air strike (by Indian Air Force after Pulwama attack), but stands with the 'tukde tukde gang' of the Jawaharlal Nehru University.

"When Gandhi and (NCP chief) Sharad Pawar will be here for campaign, you should ask them whether they support or oppose removal of Article 370," Shah said to people at his rally held in suburban Goregaon.

"Not a single bullet has been fired in Kashmir after the abrogation of Article 370," he said, adding that there is no unrest in Kashmir and in the coming days, "terrorism will be finished".

Without taking any names, he said three dynasties which ruled Kashmir didn't allow the anti-corruption bureau to be set up there.

"Those who indulged in corruption in Kashmir now are feeling the heat despite the cold there," he said in remarks laced with sarcasm.

"Only (political) dynasties in Jammu and Kashmir are feeling threatened. Several communication lines are working, telephones are operational and some markets have also opened. You will soon get Kashmir's famous apples here," he said.

Shah said nobody ever thought of abrogating Article 370 and 35(A) so swiftly, but the Modi government did it.

"Rahul Gandhi has come to politics recently. The Jan Sangh and later BJP's three generations did not back off from making sacrifices for the abrogation of Article 370," he said.

"We (in opposition) stayed with the government in the past over national issues, like when Atal Bihari Vajpayee supported Indira Gandhi during Bangladesh war or representing the Indian side in the UN over Kashmir issue," he said.

He said Article 370 was and is a political issue for the Congress, "but for us, its removal was a promise of re-integration. You (Congress) see politics into it, but we see it as patriotism," the Union home minister said.

"Due to 'Operation Tupac', around 40,000 people have been killed in Jammu and Kashmir from 1990s till today. And the opposition questions our motive behind it (scrapping of Article 370). I can assure you that we will get rid of
terrorism soon from the crown of this country," he said.

Shah said out of 196 police stations in Jammu and Kashmir, prohibitory sections were imposed only under 10.

"Ninety nine per cent of land lines are working, and 67 per cent mobile phones connections reinstated. Curfew has been removed from all areas and trade is going on," he said.

He said after the abrogation of Article 370, people from the Scheduled Castes, Scheduled Tribes and Other Backward Classes can now get the quota benefits in government jobs.

"Thousands of Kashmiri minor girls were earlier married because the Indian government's Prohibition of Child Marriage Act was not applicable in the state. With Modi's decision, Kashmiri girls are now safe," he said.

On Pawar's remarks that only a "Pulwama-like" attack can save the BJP from losing the Maharashtra polls scheduled next month, Shah said, "Whether something happens or not, the BJP will definitely win the assembly elections."

He urged people to come out in large numbers and vote in the polls and "show the right place to those who opposed the abrogation of Article 370". 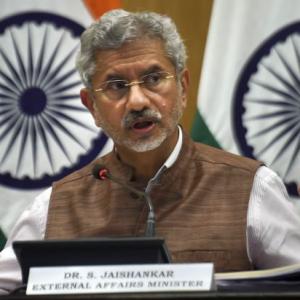