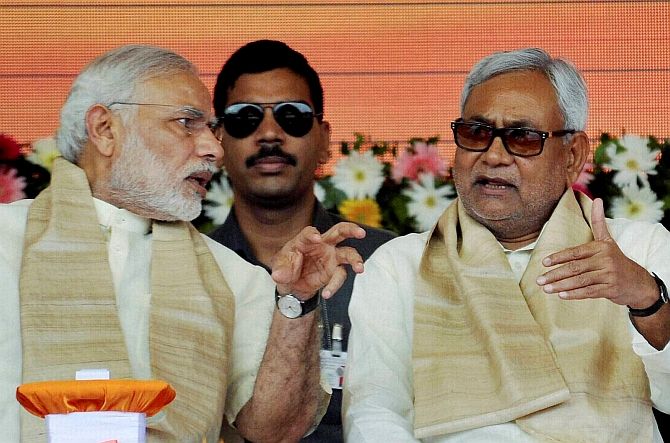 As the National Democratic Alliance in Bihar faces the ticklish question of seat sharing for 2019 Lok Sabha elections, major constituents Janata Dal-United and Bharatiya Janata Party have started building their case for a bigger portion of the 40 seats from the state.

The JD-U has insisted that Chief Minister Nitish Kumar is the leader of the alliance and it has been the “senior partner” in the state, indicating that it should get a major share.

Reacting to it, the BJP on Monday said while it agreed Kumar was the face of NDA in Bihar, the Lok Sabha elections will be fought under the leadership of Prime Minister Narendra Modi, thus staking claim to a major share in the seats.

The question at the core of the debate is whether the poor showing of JD-U in the last Lok Sabha elections in 2014 when it was out of the NDA or whether its much improved showing in the 2015 assembly elections would be taken as the yardstick for deciding the number of seats to be given to the Nitish Kumar-led party in the coming Lok Sabha polls.

While the JD-U had gone it all alone in the 2014 Lok Sabha poll and won just two sets, it registered an impressive presence in the assembly elections held a year later as a partner of the Rashtriya Janata Dal and the Congress in the Grand Alliance.

“Nitish Kumar has always been the leader of the NDA in Bihar. JD-U has always been the senior coalition partner, the proverbial big brother. There is nothing new in that,” JD-U spokesman Ajay Alok told reporters echoing the line taken by party leaders K C Tyagi and Pawan Varma after a high-level party meeting on Sunday.

Alok was responding to queries over reports in a section of the media that it was resolved at a meeting of the party’s core committee on Sunday that “JD-U will play the role of big brother in Bihar just like the BJP does in Delhi”.

Varma had said “Nitish Kumar is the face of the NDA in Bihar. That is why he is the chief minister”.

To a query whether the JD-U, which had only two members in the Lok Sabha, was likely to press for a seat-sharing arrangement commensurate with its relatively higher strength in the state assembly, Alok said, “In the past, there have been occasions when the JD-U has fought on 25 out of the 40 Lok Sabha seats in Bihar and the BJP has contested 15”.

He, however, added “under different circumstances, it would require all NDA constituents to sit together and thrash out a seat-sharing arrangement that is acceptable to all”.

After Kumar snapped ties with the BJP in 2013, smaller parties like Ram Vilas Paswan’s Lok Janshakti Party and the Rashtriya Lok Samata Party, headed by Kumar’s associate-turned-critic Upendra Kushwaha joined the NDA which went on to win a total of 31 seats in the state in 2014 lok Sabha elections out of which BJP bagged 22.

While Kushwaha has demanded that seat-sharing be decided at the earliest, Paswan is also understood to have taken up the matter with BJP president Amit Shah when he called on him in Delhi last week.

“Narendra Modi is the face of the NDA in the country while Nitish Kumar is its leader in Bihar. Where is a contradiction in that,” Deputy Chief Minister Sushil Kumar Modi told reporters in Delhi,

“Seat-sharing is not a big issue when our hearts have united (dil mil gaye). When the time comes, all of us will sit together and decide,” the BJP leader, who was in the national capital to attend a meeting of state environment ministers, said.

Union Minister Giriraj Singh, who has been known to be a bitter critic of Kumar, also struck a conciliatory note, saying “he is the chief minister of the state and Narendra Modi is the prime minister of the country. Why are some people trying to make a controversy out of that”?

However, the party’s state vice-president Mithilesh Tiwari said “it is beyond doubt that the Lok Sabha polls will be fought under the leadership of Prime Minister Narendra Modi”.

Replying to a query, he said, “If the JD-U is trying to put pressure, through the media, for a favourable seat-sharing arrangement, then it should not do so”.

Union Minister Ram Kripal Yadav, a former close aide of RJD supremo Lalu Prasad who had joined the BJP in 2014, also said, “I cannot comment on seat-sharing but Lok Sabha polls will be fought under the leadership of Narendra Modi”.

The NDA in Bihar is scheduled to hold a meeting, the first since the chief minister rejoined the coalition, on Thursday. 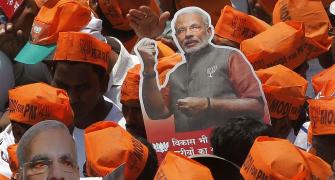 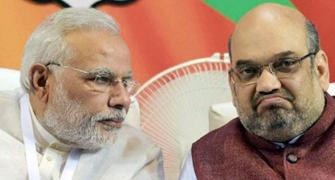 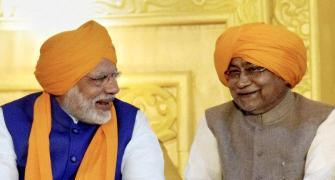