Alagiri did not offer to resign from Cabinet: Karunanidhi

Source: PTI
January 07, 2011 21:53 IST
Breaking his silence, Tamil Nadu Chief Minister M Karunanidhi on Friday denied his son and Union Minister M K Alagiri had offered to resign from the Cabinet. "These are media reports. Let them continue to be media reports. He has not given any letter to me," Karunanidhi told mediapersons in his first comments on the issue.

Media reports had said that Alagri in a letter to his father had offered to quit the Union Cabinet and as Dravida Munnetra Kazhagam South Zone Organising secretary upset over the party shielding A Raja on the 2G spectrum scam and the importance given to his younger sibling Kanimozhi in the party.

Karunanidhi refused to comment on a Delhi court holding as "maintainable" a private complaint filed by Janata Party chief Subramanian Swamy seeking prosecution of Raja in the 2G spectrum case on the plea that it was subjudice. "I never comment on the matters before the court."

He said his party would take action against Raja if he was proved guilty.

Asserting that the alliance between DMK and Congress was strong, he said the seat sharing talks for the assembly polls, due in May, would begin after Pongal festival, falling on January 15. He said PMK had sent feelers over joining the DMK fold, which it had quit in 2008. "We have responded to the feelers," he said.

On the opposition protest in the state assembly trying to disrupt the governor's address today, he said they created problem in the House.
Source: PTI© Copyright 2020 PTI. All rights reserved. Republication or redistribution of PTI content, including by framing or similar means, is expressly prohibited without the prior written consent.
Related News: M Karunanidhi, Raja, DMK, Dravida Munnetra Kazhagam South Zone Organising, K Alagiri
SHARE THIS STORY
Print this article
Will stand for DMK chief post, says Alagiri
Raja Raids: End of DMK-Cong alliance?
'Raja always put DMK's interests above his own' 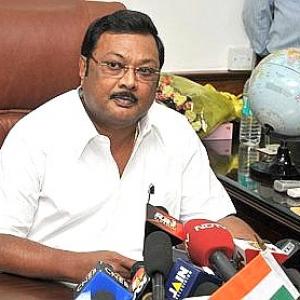 Why M K Alagiri is sulking