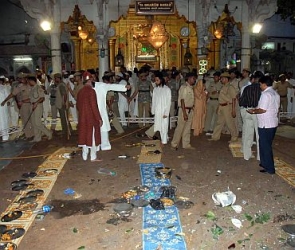 The investigation in the Ajmer dargah blast case has taken several twits and turns after one of the accused Bhavesh Patel alleged that National Investigation Agency was allowed to probe him inside the Alwar central jail illegally. “I am under pressure to implicate my co-accused and the NIA has been dictating terms to me,” he said.

The accusations have come after he wrote a letter to the CBI saying that he was pressured by Home Minister Sushilkumar Shinde, Congress General Secretary Digvijay Singh and others to implicate the Rashtriya Swayamsevak Sangh in the case.

The CBI is expected to probe the matter further. Sources from the investigating agency told rediff.com that the matter will be looked into. “We do not know if the allegations are true or false, but we will investigate the matter and prepare a report.”

Prior to Patel’s allegations, two other accused Mukesh Vasani and Raj Singh had accused the NIA of offering them Rs 1 crore to name RSS leaders in the Sunil Joshi murder case. “The NIA said that charges would be withdrawn against us, if we implicated RSS leaders,” they said.

The NIA finds itself in a spot of bother over these allegations. NIA sources say that in every case accused make such allegations. “But it does not mean it is true. These are irritants, which will slow down the judicial procedure since such allegations have to be probed into.”

Senior advocate and former state public prosecutor of Karnataka H S Chandramouli said, “The CBI or any other agency cannot brush aside such allegations. The CBI is likely to interrogate Narendra Modi’s aide Amit Shah in the Ishrat Jahan encounter case on the basis of allegations made by jailed IPS officer D G Vanzara. So why should the same rule of law not apply here?  The law mandates that every allegation be probed.”

Ram Madhav, a senior RSS leader, said that the concept of Hindu terror is nothing but a political conspiracy against the Sangh and its senior leaders. “The intention of the entire drama is to implicate RSS leaders. This is not the first time that such allegations are being made.”

”The entire episode smacks of a sinister conspiracy for political gains. We hope that the judiciary would take cognisance of the matter and conduct an honest and genuine probe,” he added.

Ganesh Sovani, an advocate for Sadhvi Pragya Singh Thakur, an accused in the Malegaon case, said, “The ultimate objective of such probes is to ban the RSS. The Congress through the NIA will do whatever it takes to get the RSS banned.”

”I, however, wonder why persons of such high stature are speaking to the accused in these cases. It has serious dimensions and I hope based on such statements some one files a writ petition in the high court seeking a probe against these Congress leaders.”

Image: Security personnel and onlookers stand at the site of a bomb blast at the shrine of Sufi saint Khwaja Moinuddin Chisty in Ajmer October 11, 2007 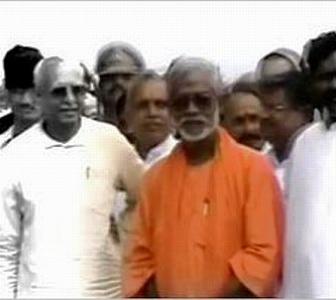 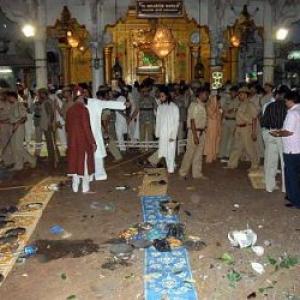 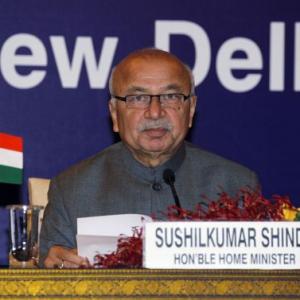