AIIMS doctors call off strike after talks with Vardhan

Resident doctors of All India Institute of Medical Sciences called off their strike and resumed duties on Sunday after Health Minister Harsh Vardhan assured them that their concerns over the National Medical Commission Bill will be duly addressed. 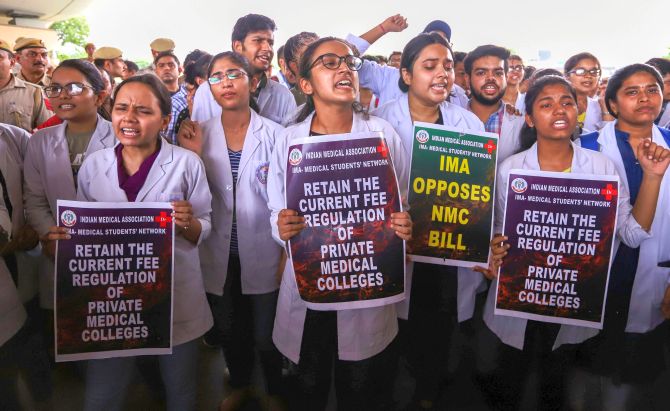 In a communique to the AIIMS director, the Resident Doctors Association said that during a meeting, the Union minister assured them of addressing their concerns while drafting the regulations of the NMC.

The minister also told them that the representatives of the AIIMS RDA and students' union will be consulted while drafting the regulations of the commission.

Vardhan met the delegation of resident doctors associations of AIIMS and Safdarjung hospital and hoped that they will end their strike in view of problems faced by patients.

However, the Safdarjung resident doctors are yet to resume non essential services.

According to sources, the resident doctors of the hospital are likely to take a decision on the strike at a governing body meeting.

"Agitating doctors from AIIMS have called off their strike.

"The health minister explained the objectives of bringing NMC bill 2019 at length and assured us that the apprehensions... will be duly addressed while drafting the regulations by the NMC once it is constituted," the AIIMS RDA said in the communique.

"We were also assured by the minister that representatives of RDA and students unions AIIMS (New Delhi) will be consulted before framing of regulations of the NMC bill under section 57 of the bill," the AIIMS RDA said.

After a governing body meeting of the RDA AIIMS, the executive committee decided to withdraw the strike and resume all services with immediate effect.

They said the AIIMS administration also assured them that the strike period, August 1 to 3, would be considered as "on duty".

The NMC bill provides for setting up of a National Medical Commission in place of the MCI for development and regulation of all aspects of medical education, profession and institutions.

Doctors are demanding certain amendments in the bill. According to them, if not amended, the bill will lead to deterioration of medical education and degradation of healthcare services.

The fraternity is opposing section 32(1), (2) and (3) of the bill saying it will encourage quackery by providing licence to practice modern medicine as community health providers for persons other than those possessing MBBS degrees.

The doctors say there was no clarity over the introduction of NEXT and scrapping the NEET-PG.

They are also opposing decreasing the percentage of seats under controlled fees structure in private medical colleges and deemed universities from 85 to 50 per cent, reducing the representation of elected members from 75 per cent in MCI to 20 per cent in National Medical Commission and autonomous boards constituted there-under. 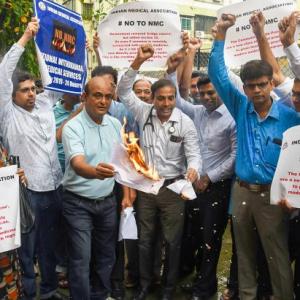