The kin of the two of the people convicted in the 2008 Ahmedabad serial bomb blasts case have questioned the timing of the court judgment, expressing apprehensions that it may be politically motivated. A special court on Friday handed down the death penalty to 38 people and sentenced 11 others to life imprisonment for the 21 blasts that took place in a span of 70 minutes, killing 56 and injuring over 200.

Five residents of Azamgarh have been sentenced to death while one has been given life imprisonment. Of these, two hail from Sanjarpur, one from Binapara village while three are from other places.

Family members of those convicted alleged that an attempt has been made by the Bharatiya Janata Party to polarise the UP assembly elections and questioned the timing of the judgment.

Shadab Ahmed, whose son Mohammad Said has been given the death penalty, on Saturday told PTI that they are not satisfied with the judgment and will now move the high court against it.

"The court had on September 3 reserved its judgment but delivering the judgment after five months, right in the middle of the Assembly elections, raises many questions," he said.

"It seems this has been done to benefit the BJP in the Assembly elections," alleged Ahmed, who is a Samajwadi Party worker.

He said Uttar Pradesh Chief Minister Yogi Adityanath is latching on to the opportunity and saying that the father of a death penalty convict is seeking votes for the Samajwadi Party. "This clearly indicates his intention," he says.

Amir Hamza, brother of Arif, who was also given the death sentence, said, "The entire matter is political. We will move the high court."

Family members of the rest of the convicts refused to comment on this issue but local residents feel that the timing of the judgment raises questions.

Ali Ahmed, a resident of Sanjarpur, said, "The timing of the judgment raises questions and the high court should be approached."

Uttar Pradesh Chief Minister Yogi Adityanath on Friday had alleged that the father of a convict in the 2008 Ahmedabad serial blasts case is campaigning for the Samajwadi Party in the Assembly polls.

He alleged the Samajwadi Party was "protecting terrorists".

Adityanath termed the court's verdict historic and claimed that of the 38 condemned to death, one is from Sanjarpur in Azamgarh.

Rajiv Yadav, general secretary of the Rihai Manch, which fights for the cause of innocent Muslims accused of being terrorists, said, "Through the judgment, attempts are being made to target Azamgarh and Muslims."

"The number of Muslims convicted in the terror-related case is much less than those acquitted. But, it is the failure of the so-called secular politics that this positive side has not been brought forward," he said.

Head of Rashtriya Ulama Council Aamir Rashadi, who runs a campaign against the arrest of Muslim youth in terror-related cases, said the BJP has once again returned to its old agenda of polarisation by insulting the Muslims in the name of terrorism. 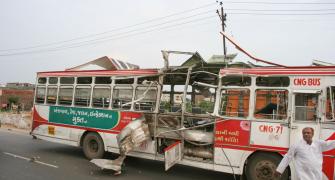 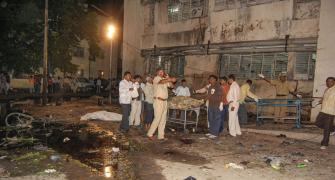