Swami Agnivesh attacked on way to pay homage to Vajpayee

Swami Agnivesh was allegedly heckled and assaulted near the Bharatiya Janata Party headquarters in New Delhi on Friday by some people, who the social activist said were BJP workers, when he was on his way to pay homage to former prime minister Atal Bihari Vajpayee. 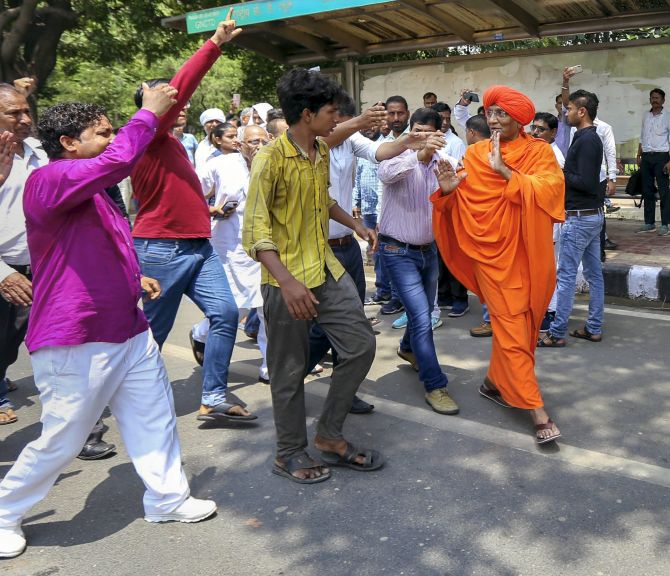 A video of the alleged attack doing the rounds on social media shows some people heckling the 79-year-old social activist.

Agnivesh said he had gone to pay homage to Vajpayee at the late leader's Krishna Menon residence, but was not allowed to get off from his car by the police.

He said he later spoke to Union minister Harsh Vardhan, who asked him to come to the BJP headquarters on DDU Marg, and even assured him that he would not be harmed.

"I was attacked while walking towards the BJP headquarters to pay my respects to Atal Bihari Vajpayee. Around 20-30 BJP workers came and surrounded me and pushed me. My 'pagdi' (turban) fell down and they started calling me a 'traitor' and asked me to leave the country," the activist told reporters.

"They pushed me towards the Vishnu Digamber roundabout and kept abusing me. Some policemen were standing there and these persons, including some women carrying slippers, kept abusing me," he said.

The policemen then escorted Agnivesh in a vehicle back to his office on Jantar Mantar Road.

The social activist claimed he even made a call to the Police Control Room, but there was no response.

"The police have so far not reached out to me. I will be filing a police complaint. Why cannot the police take suo motu cognisance of the incident since it happened in front of them? I was attacked earlier also and no arrests have been made in the case. There is an atmosphere of violence and intolerance," Agnivesh said earlier.

In a complaint filed by Vithal Rao on behalf of Agnivesh at the Parliament Street police station, it was alleged that the incident took place between 11.30 am and 12.30 pm.

"Swami Agnivesh and his two associates, including Vithal Rao, were on their way to pay homage to former prime minister. Agnivesh was stopped by the BJP workers and was asked to return. Despite Agnivesh's request, they continued to assault him and even tried to remove his pagdi," the complaint said.

The complainant alleged that despite the police presence, they (miscreants) continued with their 'gundagardi' (hooliganism). This is against law and democratic values, he stated.

The police, however, claimed that they did not receive any call from the activist regarding the incident.

The social activist said it was an "unfortunate" incident on a day when Vajpayee, who even embraced his critics, was being remembered.

Swami Agnivesh was allegedly assaulted by Bharatiya Janata Yuva Morcha activists during his visit to Pakur in Jharkhand last month.