News
Business
Movies
Sports
Cricket
Get Ahead
Money Tips
Shopping
Sign in  |  Create a Rediffmail account
Rediff.com  » News » India has been waiting for a long time: BJP on Guru's hanging

India has been waiting for a long time: BJP on Guru's hanging

Questioning the delay in the execution of Parliament attack convict Afzal Guru, the Bharatiya Janata Party on Saturday said it should have happened much earlier, after the Supreme Court had upheld the death sentence in 2005.

"The capital punishment awarded to Afzal Guru today is part of a legal and judicial process which ought to have taken place much earlier. The attack on the Indian Parliament happened in 2001, which was 12 years ago; it was an attack on India.

"Why this sort of delay, in spite of the overpowering desire of the people of the country that those who are accused of such a heinous offence ought to be given the capital punishment, as affirmed by the highest court of the land. This question would remain important and an answer would have to be found out," said BJP chief spokesperson Ravi Shankar Prasad.

He pointed out that the Supreme Court had confirmed the capital punishment against Afzal Guru in August 2005 and his review petition was rejected in January 2007, but the government delayed the action. He also sought adoption of zero tolerance towards terrorism in the country.

Party vice president Mukhtar Abbas Naqvi said Guru was a conspirator in waging war against the nation and he was responsible for the attack on Parliament in India.

"It is a late decision but in national interest. There was strong anger across the nation due to the delay (in execution). Despite the late action, people in the country have heaved a sigh of relief and this hanging has given a message to the terrorists and the anti-national forces working against the country," the BJP leader said.

Pratap Rudy welcomed the execution, saying it was a "much awaited and much wanted decision".

"This action is delayed. But undoubtedly it is a welcome action," he said.

"This was the severity of the terrorist act," he said.

Seeking to silence those raising the issue of human rights on Guru's execution, the BJP leader reminded them of the human rights of all those killed by terrorists and their patrons from across the border.

"Do the families of those innocents killed have human rights or not? Those brave watch and ward staff who secured Parliament and secured the lives of the leaders of the country, does their family have any human right or not. This question is equally important," he said.

Rudy said the BJP has always been pressing for strong and prompt action against perpetrators of terror.

"Any action against terror -- like the hanging of Afzal Guru -- should be immediate. It cannot be delayed. If the highest court of the land upheld the conviction of Afzal Guru in 2007, thereafter there was no reason why any mercy petition should have been delayed for so long.

"Though delayed, we still feel that the hanging of Afzal Guru was the right action. It has been done and the people of this country have been waiting for it for a long time," he said.

Guru was convicted of conspiracy in the December 2001 attack on Parliament and his death sentence was upheld by the Supreme Court in 2005.
Source: PTI© Copyright 2023 PTI. All rights reserved. Republication or redistribution of PTI content, including by framing or similar means, is expressly prohibited without the prior written consent.
Related News: Guru, BJP, Parliament, Supreme Court, Rajiv Pratap Rudy
Print this article
Afzal Guru execution: Security focus must be pan-India
Parliament attack case convict Afzal Guru hanged in Tihar Jail 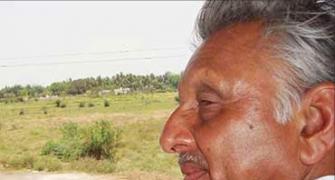 'Afzal Guru's wife was NOT informed'