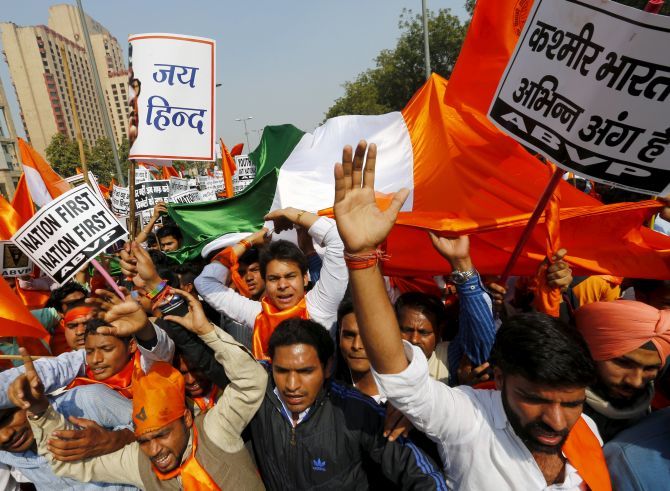 IMAGE: Activists from the ABVP carry out a march against "anti-national sloganeering" raised at the JNU campus. Photograph: Adnan Abidi/Reuters

Kanhaiya Kumar, the recently bailed Jawaharlal Nehru University students’ union president, returned to a hero’s welcome to his alma mater on Thursday. In a speech that was televised live and enthralled many, Kumar said to his fellow students that there wouldn’t be any witch-hunt of supporters of the rival Akhil Bharatiya Vidyarthi Parishad) on campus. “One hunts only those who are worthy of being hunted,” Kumar said sarcastically.

Kumar had spent nearly a fortnight in police and judicial custody -- mostly thanks to yet another example of ABVP’s new-found aggression on university campuses across the country. It was the ABVP members in JNU who had alerted a Bharatiya Janata Party MP of the “anti-national” slogans raised at an event on the campus on February 9, which started a chain of events that led to him being jailed. Kumar, 28, must have seethed inside but that was the only statement in a nearly hour-long speech which betrayed his anger.

But, this anger burns on either side. In the case of ABVP, even its former activists, several of whom are ministers in the BJP-led government at the Centre, continue to nurse reverses that the students union has suffered at the hands of the Leftist students’ unions.

“People have forgotten how our leader, P Muralidhar Rao (currently a BJP general secretary), was nearly killed by Naxals,” a minister, who was with ABVP in the mid-1980s, retorted when asked if the government could have handled the JNU issue better. Rao was a student leader at the OsmaniaUniversity in Hyderabad and claims to have weaned away a “large number of youth from the violent politics of leftwing extremism in Telangana”. He was attacked in 1986, but after the situation became difficult for Rao thereafter in Andhra Pradesh, the ABVP sent him to Rajasthan.

Former ABVP activists, particularly some of the old-timers who are now associated with its parent, the Rashtriya Swayamsevak Sangh, cite many instances of their workers being killed or beaten up by Leftist rivals in Kerala, Andhra Pradesh and West Bengal. In the past one year, ABVP has sought to settle scores themselves with anyone it believes to have “insulted” the Hindu religion or spoken against the Narendra Modi government. Wherever it couldn’t, the students union has approached the government at the Centre for help.

From Finance Minister Arun Jaitley to Home Minister Rajnath Singh and BJP president Amit Shah, many leaders started their political careers with the ABVP. Then, several ministers have as their assistants people, who, until a few years ago, were with ABVP. A sympathetic ear of the ruling party at the Centre and in several states has helped ABVP not only add to its number of workers, but also push the RSS-BJP brand of cultural nationalism in universities and colleges across the country.

But, there have been mishaps along the way; the starkest being the suicide of Rohith Vemula, a 26-year-old Dalit student of Hyderabad Central University. It has been difficult for the Narendra Modi-led government to counter Opposition allegations on the role of its ministers in having driven Vemula to suicide on January 17. About a month after Vemula’s suicide, the government flexed its muscles to arrest slogan-shouting students of JNU.

In their minds, the BJP leaders and ministers in the government -- something they do share with journalists in off-the-record conversations -- are trying to settle historical scores by supporting ABVP in taking on outfits like the Students’ Federation of India and All India Students Federation, and gradually weeding out from university campuses those who disagree with the Sangh Parivar’s ideology.

For ABVP, some universities more than others -- both Hyderabad Central University and JNU -- have proved difficult in establishing its sway. A former JNU student, currently serving as a mid-level bureaucrat with the Uttarakhand government, says the primary reason for this is ABVP’s inability to address the issue of caste and its linear understanding of India’s diversity.

The bureaucrat recounts an incident from 1998. The university was then mulling increasing of reservations in admissions, which would have increased to above 90 per cent if the proposal were to be accepted by the students. The SFI and AISF supported the proposal, but ABVP and freethinkers were opposed to it, and so were a majority of the students. A students’ meeting was organised to discuss the issue.

“The Left students’ unions found themselves isolated. ABVP was sensing victory and the possibility of finding more supporters among the students. Just then, a member of the Left unions went up on stage to deliver a speech on how Lord Rama would ill-treat his wife and children, and how he was anti-Dalit,” the bureaucrat, then an ABVP sympathiser, reminisces. His ABVP friends forgot all about the issue at hand, and with it the opportunity to find new supporters, to get into what ended into a heated exchange betraying their deep-seated upper caste biases.

This inability to negotiate the issue of caste, particularly reaching out to the Dalits, has remained a stumbling block for ABVP in universities that have had a tradition of lower castes asserting themselves. In the aftermath of Kumar’s arrest in JNU, three ABVP members quit the outfit, complaining as much about its “Manuwadi” or Brahminical ideology. All three hailed from other backward classes/Dalit families.

This lack of empathy towards Dalits made BJP leaders tie themselves in knots in the aftermath of Vemula’s suicide. Their questioning Vemula’s Dalit identity and trying to doubt his mental balance not just left many of their own Dalit MPs and leaders livid, but it also laid waste nearly two years’ of efforts by Prime Minister Modi to appropriate the legacy of Dalit icon B R Ambedkar. While the PM has continued to publicly support his ministers who intervened in the Vemula issue, Modi is said to be extremely upset at the turn of events.

After the JNU row, the Sangh Parivar has tried to take the debate towards the binary of nationalism and anti-nationalism, while the Opposition is not letting it forget its Achilles heel -- the suicide of Vemula and the role of its ministers in that. While the PM continues to reach out to Dalits, the rest of the BJP leadership continues to paint a picture of how these Dalit students are standing with the enemies of India -- Islamists, Christian missionaries and communists -- all of whom need to be severely dealt with.

ABVP’s aggressive campus politics, seen for the first time when some associated with it allegedly beat to death H S Sabharwal, a professor at Madhav College in Ujjain in 2006, is likely to continue. Campus violence by those alleged to be with the students’ union has been frequent in BJP-ruled states of Madhya Pradesh and Rajasthan in the past few years. Since 2014, its campaigns against beef eating, or anything it considers anti-Hindu and anti-national, have been frequent in colleges and universities of India.

For the present, ABVP is likely to keep the pot simmering on the issue of nationalism. It is the fight for occupying the mind space of India’s next generation and ABVP, with the support of a friendly government at the Centre and the simplicity of its message, is ahead of its rivals.

-- RSS, after it was banned in the wake of Mahatma Gandhi’s assassination, set up several outfits, including ABVP in 1948

-- In 1969-70, it organised conferences on “Marxist-infested states” West Bengal and Kerala

-- In 1973, it took part in the Gujarat Navanirman Movement

-- During the Emergency, ABVP claimed 650 workers were arrested under the draconian MISA (Maintenance of Internal Security Act)

-- It is active in 9,800 universities and colleges across India

-- In 2000, Sandeep Mahapatra elected JNUSU president - the first and only instance yet

-- ABVP has campaigned for organising Durga Puja festivities on campus 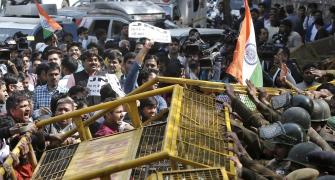 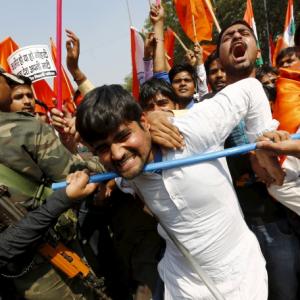