Nupur Talwar, mother of murdered teenager Aarushi, on Monday surrendered before a special Central Bureau of Investigation court in Ghaziabad following a Supreme Court directive to her to do so in the twin murder case of her 14-year-old daughter and domestic help in Noida four years ago.

Nupur, who surrendered in the court of Special CBI Magistrate Priti Singh, was immediately taken into custody by the agency.

Her lawyer R K Saini moved the court for Nupur's bail but the magistrate reserved the order for two hours, during which the agency will also file its reply.

Nupur, who was accompanied by her husband Rajesh Talwar, was seen reciting 'Hanuman Chalisa' in the court room. She had reached the court around 1015 hours.

Nobody was allowed in the court room except the CBI officials and lawyers for the dentist couple.

On April 27, the apex court had refused to stay the non-bailable warrant issued against Nupur by the Ghaziabad court.

Nupur surrendered today after a Supreme Court bench of justices A K Patnaik and J S Khehar had asked her to approach the trial judge for bail.

The bench had also turned down her plea for granting protection against any arrest after her surrender.

"We should not anticipate about what the trial court is going to do. You appear before it and the court shall consider your bail. If you do not get bail then there are higher courts," the bench had told Nupur.

The bench had also pointed out that her husband got bail in the twin murder case.

"We are not inclined to stay the operation of the order of non-bailable warrant issued by the Special Judge, Ghaziabad....We direct that petitioner (Nupur) will appear on Monday and move her bail. In case application for bail is moved, the same shall be considered expeditiously," the bench had said.

Aarushi was murdered on the intervening night of May 16-17, 2008 at her Noida residence and the body of domestic help, Hemraj, was found on the terrace of the house the next day.

Nupur had faced arrest after the Ghaziabad court had issued non-bailable warrant against her on April 11 following which the CBI had carried out searches at her Delhi premises. 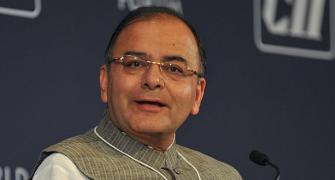