News
Business
Movies
Sports
Cricket
Get Ahead
Money Tips
Shopping
Sign in  |  Create a Rediffmail account
Rediff.com  » News » A bird drone so realistic it gets attacked by hawks!

A bird drone so realistic it gets attacked by hawks! 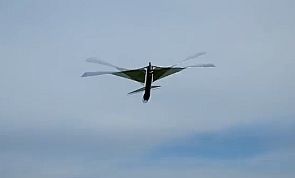 The United States army has developed a realistic robot bird that has even tricked real flocks and hawks to attack it midair, making it a potential unsuspecting future war agent.

Robo-Raven was developed in collaboration with a team of University of Maryland researchers, including an Indian-origin scientist. It glides, soars and flaps like a real bird. Its complete individual wing control allows for extreme aerobatics that no other mechanical bird has ever been able to perform, researchers from the US Army Research Laboratory claim.

However, its ability to hide in plain sight and light weight is what excites researchers most.

"It already attracts attention from birds in the area which tends to hide its presence," said John Gerdes, a mechanical engineer with the Vehicle Technology Directorate at Aberdeen Proving Ground.

Robo-Raven is much quieter than the helicopter or propeller, so it could get much closer to an adversary without revealing its presence. It's made out of carbon fibre, 3D-printed lightweight thermal resistant plastic, Mylar foil and foam.

The geometrically complex figure is shorter than two feet and weighs less than a can of soda.

Gerdes, a doctoral candidate, began building Robo-Raven in 2008 as part of graduate research at the University of Maryland's Advanced Manufacturing Laboratory that focused on developing a tech demonstrator for manufacturing techniques that morphed into a variety of spin-off research efforts.

This bird used one motor to flap both wings together in simple motions. By 2010, the design had evolved to more than four successive models.

The final bird was able to carry a tiny video camera, could be launched from a ground robot that ARL researchers created called the Lynchbot, and could fly in winds up to 10 mph -- important breakthroughs for robotic micro-air vehicles that one day could be used for reconnaissance and surveillance.

Gerdes designed the prototype with Steven Biggs, a technician within ARL's Autonomous Systems Division, and a group of about six researchers at the University of Maryland. The robot uses a fly-by-wire approach, so a handheld radio is used to control the flight.

At this point, the bird isn't flying with sensors due to a very restricted payload, but advanced research is expected to improve their understanding of how a soldier could use it, the microcontroller and the flight dynamics and ultimately enhance the robot's flight envelope, the ARL statement said.