As many as 50 detained students of Jamia Millia Islamia were released on Monday even as the situation in the University remained tense after violent protests over the amended Citizenship Act, police said. 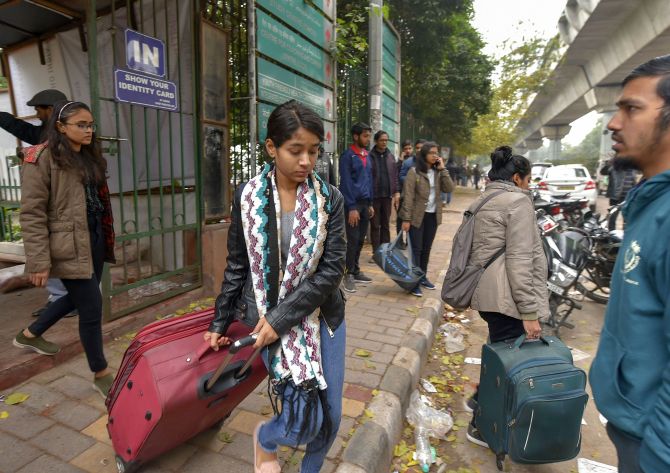 The university had turned into a battlefield on Sunday as police entered the campus and also used force, following protest against the Act.

Of the 50 students released, 35 were released from the Kalkaji Police Station and 15 from the New Friends Colony Police Station, a senior police officer said.

On Sunday night, the Delhi Minority Commission had issued a direction to the SHO of Kalkaji Police Station to release the "injured" Jamia students held there or take them for treatment at a reputed hospital without any delay.

The Commission had also directed the officer to file a compliance report by 3 pm on Monday.

DMC Chairman Zafarul Islam Khan had said that failure to implement it will attract appropriate action.

Meanwhile, two cases have been registered in connection with violence at Jamia Millia Islamia and adjoining areas, according to Delhi Police.

At the University, the situation continued to be tense with many women students preferring to leave the campus for their homes, sources said. 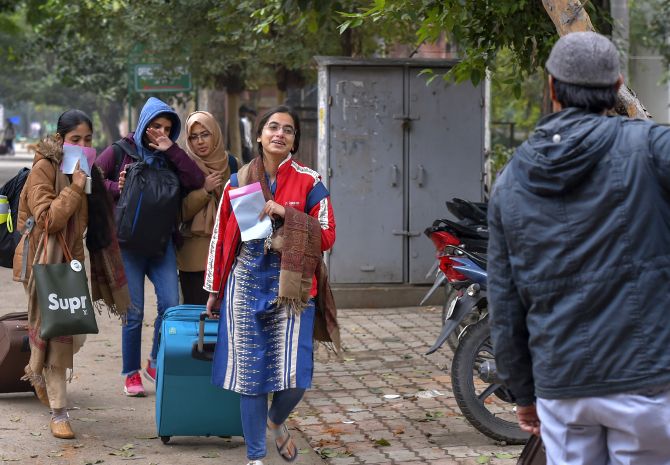 Many students feel they are not safe even inside the campus, the sources said.

The varsity had declared winter vacation from Saturday till January 5 and even postponed the exams.

Metro commuters heaved a sigh of relief as entry and exit gates of all metro stations were opened and services resumed at all stations, the Delhi Metro Rail corporation said on Monday.

In the wake of violence in southeast Delhi after the protest, the DMRC had closed the gates of around 13 metro stations on Sunday evening on advice from police.

"Security Update Entry & exit gates at all stations have been opened. Normal services have resumed at all stations," the DMRC said in a tweet on Monday.

However, traffic movement was closed from Sarita Vihar to Kalindi Kunj on Monday morning as a precautionary measure, police said.

"Traffic movement is closed from Sarita Vihar to Kalindi Kunj, Road No. 13A. Motorists heading towards Delhi from Noida are requested to take Mathura Road, Ashram and DND and those coming from Badarpur side take Ashram Chowk," Traffic police tweeted.

Protesters on Sunday had torched four public buses and two police vehicles as they clashed with the police in New Friends Colony, near Jamia Millia Islamia, leaving nearly 60 people including students, cops and fire fighters injured.

Police used batons and teargas shells to disperse the violent mob, but denied firing at them. 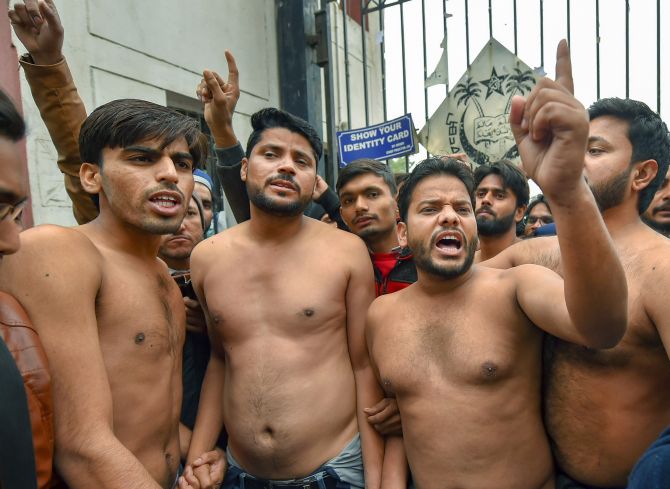 A Jamia students' body claimed they had nothing to do with the arson and "certain elements" had joined the during the protest and "disrupted" it. They also accused the police of high-handedness.

Later in the evening, Jawaharlal Nehru University students held a protest outside the Police Headquarters in central Delhi against the police action at Jamia university and the standoff continued till late in the night.

Soon after the violence, Jamia Millia Islamia Chief Proctor Waseem Ahmed Khan claimed that the Delhi Police entered the campus without permission and beat up staff members and students.

Condemning the police action, university Vice-Chancellor Najma Akhtar had said that students who were inside the library have been moved out and they are safe.

Police said they entered the university campus only to control the volatile situation.

The protest was being held against the contentious law which seeks to provide citizenship to non-Muslims religious minorities from three neighbouring countries who arrived in India to escape religious persecution. 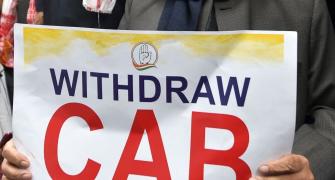 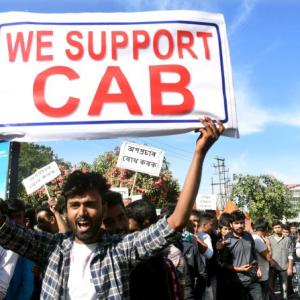