The Punjab Police has arrested five people in connection with the rocket-propelled grenade attack at its Mohali office and pointed at the nexus of militant outfit Babbar Khalsa International and Pakistan's spy agency ISI. IMAGE: Police personnel show a RPG found at the site of a blast that occurred outside the Punjab Police's intelligence department office in Mohali on Monday, May 9. Photograph: PTI Photo

Director General of Police V K Bhawra on Friday said a sixth accused is in police custody in a separate case and he will be arrested in this case as well.

In an audacious attack on Monday, a rocket-propelled grenade was fired at the state police's intelligence wing headquarters in Mohali's Sector 77.

Bhawra said the plot behind the incident has been traced and the nexus of militant outfit Babbar Khalsa International and gangsters at the behest of the Pakistan's ISI has come to the fore.

"This incident was the result of the BKI-gangster nexus at the behest of Pakistan's ISI," said the DGP addressing a news conference.

"The key conspirator who organised all logistics in this case is Tarn Taran resident Lakhbir Singh, alias Landa, who used to be a gangster and had shifted to Canada in 2017," the DGP said.

"He is a close associate of gangster-turned-terrorist Harvinder Singh Rinda, who operates from Pakistan," he said.

He said all people behind the attack have been identified.

"What was the conspiracy, who did from where as whose behest, who provided shelter, logistics, weapons, recee, all these things are clear now," Bhawra said.

Those arrested are Kanwar Baath, Baljinder Kaur, Baljinder Singh, alias Rambo, Nishantdeep Singh and Jagdeep Kang, said the DGP, adding that they are the ones who provided shelter, logistics and arms to the accused who carried out the incident.

One of the three people who carried out the attack is Charath Singh, who is also a resident of Tarn Taran.

However, the three suspects who carried out the attack are yet to be arrested, said DGP.

The DGP said Tarn Taran resident Nishan Singh, an accused in the case, is already under the custody of the Faridkot police in some other case. He will be arrested in this case too, he said.

The DGP said Nishan Singh provided shelter, arranged shelter through his friends and known people and retrieved the RPG and handed over to those people who carried out the attack.

Nishan Singh is key conspirator Lakhbir's main associate. He was arrested by the Faridkot police a few days ago, he said.

The DGP said Nishan Singh provided shelter to the accused who carried out the attack.

"Besides, Kanwar Baath and Baljit Kaur are contacts of Nishan Singh," he said while giving details.

The RPG was retrieved by those who carried out the attack from a location provided by Landa, he said.

Rambo retrieved an AK-47 as told to him by Nishan Singh.

Rambo then took it and handed over to Charath Singh. From May 7, they moved from the Amritsar-Tarn Taran area and incident took place in Mohali on May 9, he said.

"Their local contact in Mohali was Jagdeep Kang. He provided the local logistic support. Charath Singh and Jagdeep Singh Kang visited the area during the day time on May 9," he said.

"Finally, Charath Singh and two more who had come from outside executed the incident," said the DGP.

"In addition, two people who have been brought for questioning from Noida are Mohd Nasim Alam and Mohd Sharaf Raj. They originally hail from Bihar. We have not arrested them yet and they are being questioned," said the DGP.

Earlier, police sources had said Pakistan-based Rinda has been taking the help of local gangsters to carry out anti-national activities.

His name came up when a terror plot was foiled recently with the arrest of four suspected Pakistan-linked terrorists in Haryana's Karnal.

Rinda's involvement was also detected in a hand-grenade attack at the Crime Investigation Agency office in Nawanshahr last month. 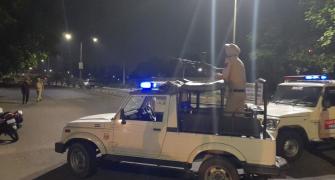 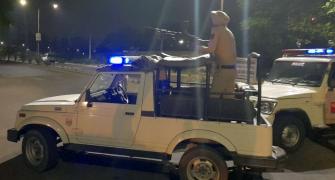 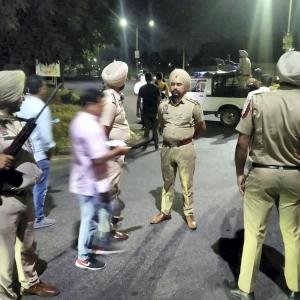 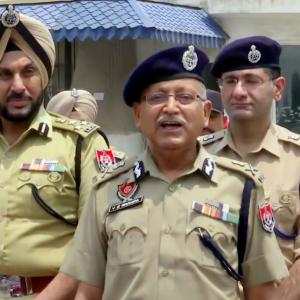