The Indian Railways has operated 1,565 'Shramik Special' trains since May 1 and ferried over 20 lakh migrants back home, the national transporter said on Tuesday. 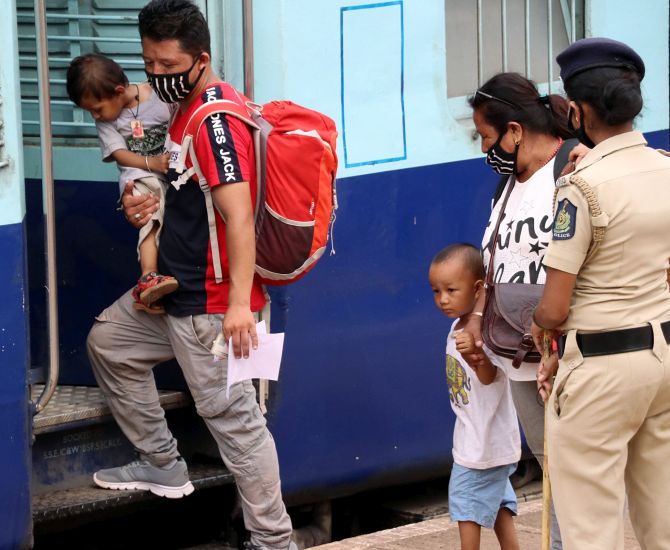 IMAGE: Migrants board Shramik Express to reach their native place in Himachal Pradesh during a nationwide lockdown, at Corlim Railway station, in Goa. Photograph: ANI Photo

While Uttar Pradesh has allowed 837 trains, Bihar has permitted 428 and Madhya Pradesh more than 100, Railway Minister Piyush Goyal said in a tweet.

As of Monday night, 162 trains were in transit and 1,252 had reached their destinations. Around 116 more are currently in the pipeline, it said.

"Under the leadership of PM @NarendraModi, more than 20 lakh workers have been sent to their homes by the Railways on 1,565 Shramik Special trains," the minister said.

According to data till Monday night, more than 496 trains have originated from Gujarat and 17 more are in the pipeline, while over 266 trains have already started from Maharashtra, with 37 more in
the pipeline.

Among other originating states, 188 trains have started from Punjab, 89 from Karnataka, 61 from Tamil Nadu, 58 from Telangana, 54 from Rajasthan, 41 from Haryana and 38 from Uttar Pradesh.

Out of the trains that have terminated so far, the maximum has been in Uttar Pradesh at 641, while 73 more are in transit, followed by Bihar with 310 and 53 more on the way.

The operation of these trains has, however, led to a political mud-slinging, with the opposition accusing the Centre of charging fares from migrants and then the Centre accusing some states having non-Bharatiya Janata Party governments of not providing permission for the migrant trains to run.

Goyal, in a series of tweets on Monday, said he had spoken to the Odisha, Bihar and the Uttar Pradesh governments, and they assured him of permitting more trains.

A 'Shramik Special' train carries around 1,700 passengers, instead of the earlier 1,200, to ferry as many workers home as possible.

Initially, these trains had no scheduled stoppages during the journey, but the Railways now allows up to three stoppages in the destination states.

While the transporter is yet to announce the cost incurred on these special services, officials indicated that the national transporter is spending around Rs 80 lakh per service. 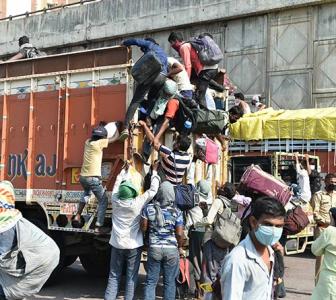 India ahead of US, UK in slowing down COVID-19 spread