Two Kashmir residents were nabbed in connection with the Sunjwan encounter in which two suicide bombers of Pakistan-based Jaish-e-Mohammed were killed in Jammu, a senior police officer said on Saturday. Additional director general of police Mukesh Singh said the force is looking for two more conspirators involved in the planning and transportation of the two heavily-armed terrorists from Sapwal near the International Border in Samba district to Jammu.

As per one of the arrested persons, the slain terrorists were Pashto-speaking either from a village in Pakistan bordering Afghanistan or from Afghanistan itself, the Jammu police chief told reporters in Jammu in the evening.

An assistant sub-inspector of the Central Industrial Security Force was killed when the terrorists equipped with suicide vests and sophisticated weapons attacked a bus before being engaged and killed by the security forces in Jallabad locality of Sunjwan on Friday.

Nine security personnel, including two policemen, were also injured in the incident.

The ADGP said a case under relevant sections of the Indian Penal Code, the Arms Act and the Unlawful Activities (Prevention) Act was registered at police station Bahu Fort in connection with the encounter.

"During investigation, police on the basis of technical analysis succeeded in effecting the arrest of a person - Shafiq Ahmed Sheikh of Mir Mohalla village in south Kashmir's Tral, who had facilitated the stay of terrorists in Jallalabad area of Jammu," Singh said.

On the disclosure of Sheikh, he said, one more person, Mohammad Iqbal Rather of Malwan village in south Kashmir's Kulgam, in whose residence at Jallalabad the terrorists had hidden themselves, was also detained.

"The analysis of the mobile tower as well as the internet data usage of the general area led to suspicion on a person named Bilal Ahmed Beig of south Kashmir's Kokarnag who had received the terrorists on the border at Sapwal in Samba district and brought them to Jallalabad area before handing them to Sheikh," Singh said.

He said Sheikh also revealed that his brother, Asif, helped in finding a place for the accommodation of terrorists as well as provided mobile phones to the terrorists.

"The technical analysis of the CCTVs in the Jallalabad area as well as highway corroborates the disclosure of the arrested person," the ADGP said, adding a search is on for Beig and Asif who are absconding.

He said Sheikh also disclosed that the two terrorists were not speaking Kashmiri, Dogri, Hindi or Urdu.

"When he was made to hear Pashto, he immediately recognised the language of the terrorists which indicate that they were either from an area of Pakistan border near Afghanistan or Afghanistan itself," he said.

Responding to a question about the route taken by the terrorists to infiltrate into this side from Pakistan, the officer said whether they came through an underground tunnel or crossed the border fence is part of the investigation, which is underway.

"After the encounter, police teams worked tirelessly day and night to establish the identity of the conspirators who were behind this plan to carry out a suicide attack in Jammu," he said.

On the basis of technical analysis and evidence, the police first zeroed in on Sheikh, who works at a walnut factory at Narwal, which is not far away from the scene of the encounter, Singh said.

The ADGP said Sheikh and his brother Asif are deeply involved with terrorists of JeM.

"Asif created a telegram ID called Pagal Jamaat (Mad group) for Shafeeq and also provided him a mobile phone with a SIM card. He also contacted a JeM commander in Pakistan by the name of 'Veer', his telegram identity," Singh said.

He said the commander of JeM instructed him to go to Jammu to receive a group of suicide attackers who will be brought by someone.

Though he did not disclose his name, the person was identified as Sheikh who set out on the instructions of JeM commander from Kashmir's Pulwama at 10 am on April 20 and reached Jammu around evening time.

"He stayed at Transport Nagar and at around 12 am (midnight), he set out for Sapwal (border) in Samba and picked up two terrorists of JeM. They boarded a medium size truck loaded with empty vegetable crates and neatly created cavity among the crates for hiding the terrorists," the police officer said.

They reached Jallabad locality of Sunjwan around 2.30 am and Wagay, his co-driver and two terrorists were found in the truck there.

Sheikh received the terrorists and took them to his house where they stayed during the day and discussed their plans with their handlers across the border, Singh said.

The plan was to take them to the nearest security location and inflict maximum causalities on the security forces, to discourse the VVIP visit, the ADGP said, referring to the scheduled visit of Prime Minister Narendra Modi to Palli Panchayat in Samba on Sunday.

"Before these people could set out for their mission, we received intelligence inputs that there are two terrorists and a cordon was laid with other security forces. The terrorists were holed up throughout the night," he said, adding had they moved out, they could have caused huge damage but "we managed to keep them there and successfully eliminated them."

He said that they were picked up from Sapwal border in Samba was further collaborated by the CCTV evidence along the way.

"We are working on the leads and are hopeful to arrest both the absconding accused person soon. Our counterparts in Kashmir are also actively pursuing the leads and more arrests are likely as the investigation progresses," he said.

Asked about reports suggesting infiltration of some more terrorists into this side, the officer said this group consisted of only two members, adding further investigation is on. 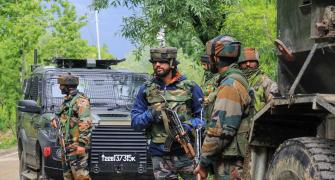 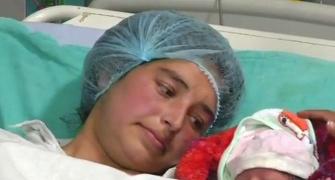