From dancing on broken glasses to negotiating with terrorists, from fighting an alligator to developing innovative measures to help COVID-19 patients, 29 children from across the country were conferred with the Pradhan Mantri Bal Puraskar on Monday for their contribution.

Twenty-nine children, including 14 girls, were awarded in six fields -- innovation, scholastic achievements, sports, arts and culture, social service and bravery. Each awardee received a medal, cash prize of Rs 1 lakh and a certificate.

Remona Evette Pereira, 16, is a young performer of Bharatanatyam and has staged various dance performances on broken glasses, balancing on mud pot and with fire among others.

Remona was awarded for her excellence in the field of art and culture.

Syed Fateen Ahmed, 13, has won various international piano competitions and is one of the youngest certified Indians to score a distinction in diploma in music.

He says he aspires to put India on the world map of classical music. He has also performed during the UNESCO World Art Day.

Dhritishman Chakraborty, 5, the youngest awardee, can already sing in five languages -- Assamese, Sanskrit, Bengali, Hindi and English. He was conferred the 'Youngest multilingual singer' by the India Book of Records 2021.

The government awarded 12-year-old Gurugu Himapriya for her immense bravery.

During a terrorist attack in February, 2018, at Sunjuwan Mil Camp in Jammu, she kept one of the terrorists engaged in a conversation for four to five hours despite being heavily hit by grenades. She also negotiated with the terrorist and thereby prevented families from becoming targets.

Shivangi Kale is another girl who was awarded for bravery. Less than six years old at the time of the incident, Shivangi's presence of mind saved her sister and mother from electrocution and subsequent death.

Dhiraj Kumar, 14, was awarded for his courageous act of rescuing his younger brother from an alligator in River Gandak, a left bank tributary of the Ganga.

While all the other boys accompanying them ran away, Dhiraj fought with the alligator and succeeded in saving his sibling.

Vishalini NC, 7, has invented an 'automatic multi-functional life rescue flood house' which can prevent incidents of drowning during flood disasters.

A year ago, she became one of the youngest patent holders of India.

She was inspired by her uncle who was suffering from Parkinson's and wanted to ease his living. The device is in the form of a glove or a strap. She also developed JTremor Index to represent the tremor profile of a body. This tremor profile analysis can assist neurologists while planning dosages.

Puhabi Chakraborti, 15, developed a user interface to control a spirometer which helps in providing an adequate amount of oxygen and gas mixtures to COVID-19 patients.

She also developed an Artificial Intelligence-based application for athletes to support their nutritional needs.

Meedhansh Kumar Gupta, 12, has a keen interest in Information Technology and is a young app developer.

He developed a dedicated portal providing all-related information on COVID-19 on a single platform during the early stage of the pandemic. He was awarded for his excellence in the field of social service.

Abhinav Kumar Choudhary, 16, developed an e-commerce platform to facilitate buying and selling of used books. The platform has provided books to over 10,000 students and resold over 30,000 books.

His initiative has helped in environment conservation too. He also developed a machine to promote the use of sanitary pads and for their eco-friendly disposal.

The project has been expanded to other districts of the state. He has also developed a dashboard for bed availability at hospitals for COVID-19 patients. He, too, was awarded for his excellence in the field of Social Service.

Arushi Kotwal, 17, has won several medals in chess at the national and international levels.

She has represented India in Commonwealth Chess Championship multiple times.

Arushi says she aspires to become the Grand Master. She was awarded for her excellence in the field of sports. 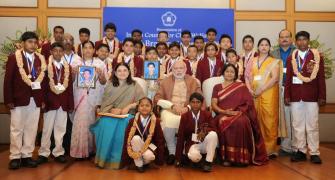 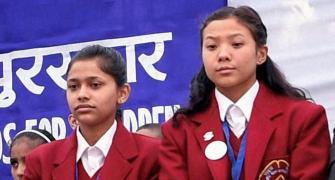 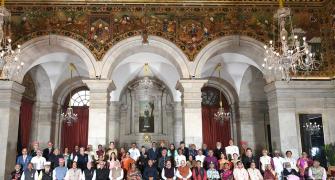 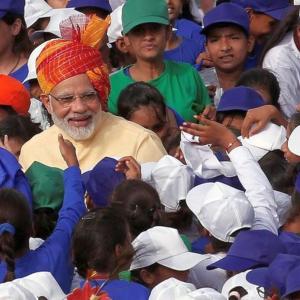