The Gujarat chief minister, who held his sway over a gathering in Bangalore, asked the people to give the BJP government in Karnataka another chance. Vicky Nanajappa reports 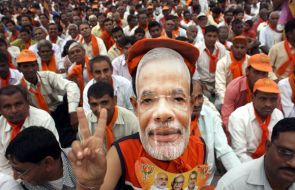 “I will not go until you ask me to go,” said Gujarat Chief Minister Narendra Modi in his inimitable style to a mammoth crowd in Bangalore. “I will speak for sure,” he said but immediately added that the state leaders must speak first. This calmed down the crowds at the Basavangudi National College Grounds which waited to hear the Gujarat chief minister.

"I have come all the way from Ahmedabad to speak to you. I will be here till you ask me to go," Modi, who drew bigger cheers than local leaders like Ananth Kumar and Jagadish Shettar, said.

When Ananth Kumar took the mike, the crowd began to shout, "bring Modi." This forced Modi to come forward and request the crowd to let the local leaders speak.

Modi took a dig at the Congress and said that everyone had been asking who their chief ministerial candidate was. "Enough of showing us the hand (Congress symbol), show us the face."

Speaking about the problems of the Bharatiya Janata Party in Karnataka, Modi asked, "Who does not face problems. In Gujarat the BJP faced so many problems in 1995. By the time of the next elections, the media had written us off. But the people of Gujarat voted for us. We realised we had made a mistake in 1995. But when we got the mandate again we set our house in order and swore never to make a mistake.”

“However, we never forgot one thing, and that is development. Look at Guajarat today. In Karnataka, the BJP faced the same problem, but they never compromised on development. Give us another chance in Karnataka," Modi said.

“Is Delhi safe? There is a big government there run by the Congress. They cannot keep Delhi safe. Can they keep Karnataka safe? Do you want to make the mistake of bringing them to power? The Congress only promises. Did they bring down inflation as they promised?” questioned Modi.

“The Indian society never disregards the words of a mother. But there is one mother who says, ‘power is poison’. But what does the son do? He comes to Karnataka and screams, ‘give us power’," Modi said without naming Sonia and Rahul Gandhi.

“Why is the Congress silent on development and a host of other issues? Is there an Italian lock on the mouth of the Congress? I challenge the Congress to compete with any BJP government in the country,” said Modi.

Modi repeatedly asked the crowd if they wanted to bring leaders from the Congress who were born with a golden spoon. “They act bigger than the nation, they lie to you. They ran a smear campaign against me in Gujarat. They are doing the same against the BJP in Karnataka. They will fail in their efforts. More the Congress rules, the more the nation suffers, Modi said

“Take the Italian marine case for instance. Italy is such a small country and they had the audacity to tell us that they won't send back the marines. Had the Supreme Court not interfered, the UPA led by the Congress would have done nothing. What about the beheading of our soldiers at the Line of Control? Did the Congress act? No they gave the Pakistan Prime Minister chicken biriyani for dinner,” he said

“We have had an external affairs minister of the Congress from Karnataka. What does he do? He reads the speech of another country. The Congress speaks about corruption in Karnataka. Do you known how many zeroes are there in the 2G scam? Alright, I will give you some work - start by writing at 7 Race course road and by the time you complete the zeroes you will reach 10 Janpath,” remarked Modi.

Seeking a mandate for Karnataka CM Jagadish Shettar, Modi said he was a great leader and believes in development. “People all over are in awe of his achievements. I am proud I am a part of a party Shettar represents. I want the blessings of the people of Karnataka. Prove every political pundit wrong who says the BJP will lose. Send the Congress into exile from Karnataka and do not let them loot your treasury,” added Modi. 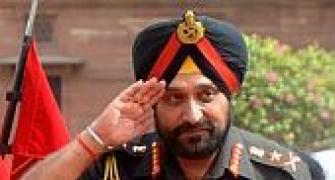 BJP promises free laptops, rice at Re one in Karnataka
Pakistan is a peace loving country: Army chief Kayani Shettar likely to pull off 5th win, but with lower margin