News
Business
Movies
Sports
Cricket
Get Ahead
Money Tips
Shopping
Sign in  |  Create a Rediffmail account
Rediff.com  » News » 'Yes, we are sitting on a time bomb' IMAGE: Villagers wait outside an NRC centre to get their documents verified by government officials at Mayong Village in Morigaon district in Assam. Photograph: Reuters

Prafulla Kumar Mahanta, former founder-president of the Asom Gana Parishad, was in Delhi to drum up support against a proposed amendment to the Citizenship Act 1955 that he believes is unfair to Assam's 'indigenous' people. He spoke to Radhika Ramaseshan about the issues confronting Assam.

You were the star of the All Assam Students' Union movement for detecting and deporting the so-called foreigners from Assam. After five decades, the exercise is reaching a conclusion of sorts under the leadership of Sarbananda Sonowal, who was your junior colleague in AASU. How do you feel about this?

It's all right. Sonowal joined a national political party (the Bharatiya Janata Party) that is in power in Assam and the Centre.

This issue of detecting non-Indians is a common concern of the AGP, BJP and the Centre.

His (Sonowal's) leadership arises from a democratic system, so the two are not inter-related.

The BJP has stolen the limelight from the AASU-AGP. Do you feel cheated or dejected?

Let's be clear. The National Register of Citizens of India was prepared under the directions of the Supreme Court.

The Court monitored the entire process.

Credit should not go or be claimed by any political party.

Loud claims must be avoided though it may be tempting for a party in power to do it.

You started a protest movement against the proposed amendments to the Citizenship (Amendment) Bill, 2016 under the banner of the Asom Andolan Sangrami Mancha. What are your objections?

Mainly that the changes envisaged go against the spirit of the Assam Accord (signed in 1985 between then PM Rajiv Gandhi and AASU and other student outfits).

The Citizenship Act was amended in 1982 and in its place the Illegal Migrants (Determination by Tribunals) Act was enacted only for Assam in 1983 (the IMDT Act was intended to insulate the 'minorities' from the alleged harassment and victimisation by AASU activists).

The Citizenship Act was amended again in 1986 (the 1986 amendment inserted Section 6A under which all persons of Indian origin who had entered Assam before January 1, 1966 were deemed to be Indian citizens while those who came after that date but before March 25, 1971 were to get citizenship upon registration, after a 10- year interregnum. The rest were to be deported under the IMDT Act).

The point is these amendments went against the Assam Accord as a result of which indigenous people of Assam suffered immensely.

The Assamese people's struggles and sacrifices will go waste (the proposed amendment confers citizenship on illegal migrants who are Hindus, Sikhs, Buddhists, Jains, Parsis and Christians from Afghanistan, Bangladesh and Pakistan).

Have you discussed the contentious amendment with Prime Minister Modi and BJP President Shah?

We have already said what we have to, we staged protests.

Sometime back we met the Union home minister.

A Joint Parliamentary Committee has been set up to look into it. The report is expected by December.

The BJP has stuck to the old divide it drew between the refugees and infiltrators from Bangladesh who live in Assam.
Who will have to compromise, the BJP or the AGP?

Why refugees at the cost of Assam?

If they want to treat people as refugees, why doesn't the government release them in other states? We are clear.

After 1971, whoever came in, whatever be their religion, they must be treated as infiltrators.

The question of compromise doesn't arise.

We don't want this amendment passed.

The NRC authorities have given time to the identified stateless to prove their citizenship. What happens if they can't? Bangladesh said it won't take back a single deportee....

That has to be decided by the Centre and not the state government.

It's not as though Bangladesh has never taken back deportees.

The government there asks for a permanent address (in Bangladesh) and if a deportee can furnish one, he's repatriated.

My government sent back 25 infiltrators.

After the NRC released its list, Arunachal Pradesh turned back the so-called infiltrators who tried to cross over from Assam. Is the north east sitting on a demographic time bomb?

Why only Arunachal? Even Nagaland and Mizoram have the right to throw out such people. Yes, we are sitting on a time bomb.

Assam has remained largely peaceful. On its part, what did the AGP do to ensure things didn't go out of hand?

We told common people that the NRC is required to enable genuine Indian citizens to register.

I suggested to her to have an NRC in West Bengal.

In 1951 when the first NRC was prepared in Assam, its population was only 80 lakh (8 million).

It's certainly not for natural reasons.

The AGP and BJP are allies, you have ministers in the Sonowal government. Apart from the amendment, do you have other areas of discord?

The alliance is going on, but it may not be possible if the amendment gets enacted.

This is the only point of disagreement.

The BJP is milking dry the NRC issue not only in the north east, but other parts too. It's become a BJP campaign theme...

Everybody will try to do it. Congress is trying.

The BJP is in power so its campaign will be louder and more forceful.

It could have uneasy ramifications because in Assam, the question of foreigners gets entangled with that of migrants from the other Indian states.
Indeed, both are called outsiders. The Assamese people are also working and living in other states.
If the issue is blown up, won't it endanger everybody's livelihoods?

They are Indians, they have the right to vote.

Here again I must clarify that migrants also must submit legacy data.

The problem is a Bengali may genuinely be from West Bengal, but if he's not able to submit legacy data like proof from electoral rolls or land patta, it is problematic.

The 'outsider' term is used only for Bangladeshis, not for Indian migrants.

There's a perceptible churn among the BJP's allies. The Telugu Desam Party and the People's Democratic Party have left the NDA. Where does the AGP stand?

The AGP was part of non-BJP coalitions that were supported from outside by the Congress, like the United Front. If such a possibility arises after the 2019 elections, do you see the AGP as part of it?

We haven't discussed, but the unity of regional political parties is a must.

Only we will not accept the Congress' leadership.

We joined hands with the BJP to defeat the Congress.

the Congress didn't support the UF government for long. As an ally, the BJP is okay.

So it's decided that you will fight the Lok Sabha polls with the BJP?

The AGP is rising again, so the matter of how we should fight the Lok Sabha polls, alone or in alliance, will be discussed by our leaders. 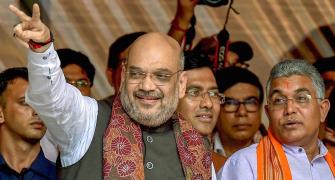