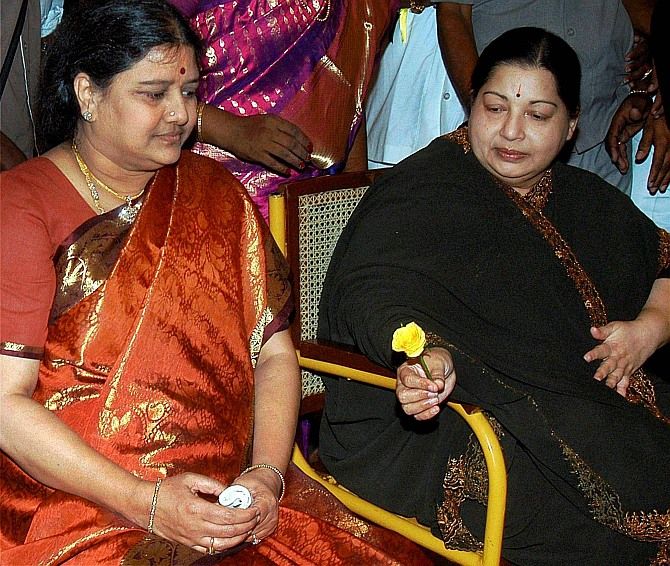 'I see the queen bee kind of syndrome.'
'When they know that there is a queen bee, the bees will hang around her for some time and then fly away.'
'I won't be surprised if somebody else takes the place of the queen bee.'

M G Devasahayam, a former IAS officer and a retired army officer, has been a strong critic of the late J Jayalalithaa.

How do you see the AIADMK and Tamil Nadu after her death?

During the Emergency, Jayaprakash Narayan was my prisoner in Chandigarh and we used to talk about the politics in Tamil Nadu, about M G Ramachandran, K Kamaraj and M Karunanidhi.

Kamaraj had obviously briefed JP before he started his movement about corruption and Tamil Nadu politics.

JP had started his anti-corruption movement and Karunanidhi was the chief minister then. I still remember what Kamaraj said: That he didn't want to criticise Karunanidhi but not support him either as Indira Gandhi would throw him out and bring MGR.

JP then asked, why? He told JP that the DMK (Dravida Munnetra Kazhagam) was at least a political party. The AIADMK was nothing more than a cinema crowd with no political moorings at all.

It was a party without any kind of ideology or philosophy. It continued that way; a personality cult party.

That is the general feeling. I also feel that way, but then something else also could happen.

I see the queen bee kind of syndrome. When they know that there is a queen bee, the bees will hang around her for some time and then fly away.

In this case, I won't be surprised if somebody else takes the place of the queen bee.

They know if they wither away, they will lose politically and administratively.

I won't be surprised if the bees themselves create a new queen bee for their own survival! That is the culture of the party.

Can a person who was not directly involved in political activities hold the party together?

You don't need to be involved in politics. Was Jayalalithaa in politics when she was inducted into the party?

When she was made the party's propaganda secretary, she hardly knew anything about politics.

When MGR passed away, she could come back after an initial setback and take over the party.

Because she was a beautiful former actress, she was made the queen bee by all.

It is said that the candidates for the last assembly elections were chosen by Sasikala...

Yes. Not only the candidates, the rank and file also.

Their survival instinct may force them to adopt a queen bee and stick on for some time.

Only for some time? They have four-and-a-half years ahead...

They have a comfortable majority now. So, I won't be surprised at all if they stick around till the next elections.

For survival, they may create a queen bee and this lady may take over.

The talk is that she may become the general secretary of the party.

Why is it that we see in Tamil Nadu such frenzy and passion when a mass leader dies? When MGR died also, people killed themselves...

This is because of the personality culture.

Somehow or the other, this kind of culture is rooted here.

Democracy has not taken much of a root here. They have this messiah syndrome.

Between MGR and Jayalalithaa, there are a lot of commonalities.

They were highly visible cinema personalities. MGR created the image of the champion of the poor through his films. When he became the chief minister, he opened up the Pandora's box of freebies.

But the crowd you see is a small percentage of Tamil Nadu's population of 7.5 crore (75 million); a microscopic minority. But they are visible to the television cameras.

This is a constituency created assiduously through cinema and freebies.

The cinema and freebie culture combined created a messiah culture.

Do you think she created this successful Amma brand for herself?

For your information, she didn't. It was Chennai Mayor Saidai Duraisamy who did it when he became politically irrelevant.

As a mayor, he was not successful. Then he started these Amma Canteens, slowly the Amma brand grew. So, the brand was created by Duraisamy.

But she always told the people that she was Amma to the people of Tamil Nadu...

That electoral rhetoric was a must. Otherwise, she would not get votes.

She was voted to power only because of the Amma rhetoric.

Will the brand survive even after her?

No. even if they create another queen bee in artificial circumstances, she will not be able to recreate the same aura and brand.

How will history remember Jayalalithaa? As a woman of courage and determination in a male dominated world of politics?

Absolutely. Though I had been a strong critic of hers, she had certain characteristics which need to be admired.

She was a very strong willed person and was able to survive and succeed in a man's world.

As an administrator, she was decisive and that was one of her strong traits.

The weakness was too much of concentration of power.

She also allowed a coterie to run and soon, she lost touch with the ground realities.

But because of the freebees, she could create a very committed vote-bank and win elections.

Though she was decisive, this concentration of power and authoritarian character mar the good elements in her.

History will remember her as a person who ran a welfare state.

Her autocratic behaviour also will go into history.

Even after three decades, the people of Tamil Nadu remember MGR as Ezhai Thozhan (friend of the poor). Will she be remembered in the same manner?

Not in the same league as MGR, but she won't be forgotten that soon by the people.

Will she be remembered as a benevolent Amma?

I have my own doubts. Yes, in some sections, certainly. Her followers will remember her that way, but not in totality. 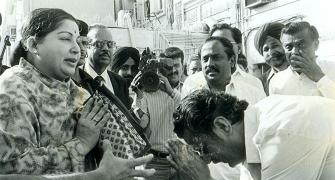 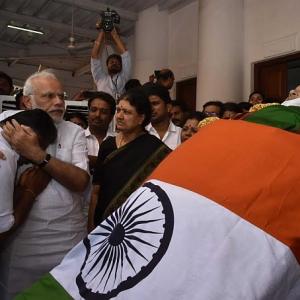