'We can't be outliers. We can't be bystanders. We have to be players.'
'The Taliban also need India to balance the winners in this game.' "India has about $3 billion worth of commitment in Afghanistan, but there is no authoritative voice in Afghanistan willing and able to speak up for India," former Ambassador Jitendra Nath Misra tells Rediff.com's Archana Masih in the concluding part of the interview.

Do you see the present Taliban leadership, less beholden to the ISI than the original Taliban?

They want to be less beholden to the ISI; it doesn't mean they will be. But there are unresolved issues.

Even though the old Taliban had to accommodate Pakistan, no Afghan government -- including the Taliban -- till date has accepted the Durand Line between Afghanistan and Pakistan as a legal border.

Thus, there is a degree of tension in the relationship regardless of who rules either country.

The Taliban are perhaps a little less dependent on the ISI because China is a new factor. China is ready to fill the void which will to some extent be at the cost of Pakistan.

Hence, it is not going to be easy for Pakistan to have complete control over the Taliban.

The geopolitics is considerably different today. The Taliban has said India can continue and complete its projects in Afghanistan. Can we believe them?

India has about $3 billion worth of commitment in Afghanistan, but there is no authoritative voice in Afghanistan willing and able to speak up for India.

At the same time, the Taliban is not irrational. They now have to reconstruct the country. Historically, Afghans have never been able to become a nation State with defined boundaries, institutions and proper infrastructure because it is a fragmented country.

Why would the Taliban want to destroy this infrastructure? Why would they want to spite India?

India is a marginal player compared to the Chinese, Russians, Iranians and Pakistanis. These countries have their embassies open and thus a presence. We don't have that right now.

But we can make some difference because we are a regional power. The Taliban also need India to balance the winners in this game.

We should hold the Taliban to the commitments of the previous Afghan government. If they want us to continue our infrastructure development in Afghanistan, we must insist on continuity from their side too. IMAGE: A family from Afghanistan crosses into Pakistan at the Friendship Gate crossing point in the border town of Chaman, Pakistan, September 7, 2021. Photograph: Saeed Ali Achakzai/Reuters

Since India and Afghanistan don't share a physical border at present, why is it so important for India to pitch a tent in Afghanistan?

It is very important for India to pitch a tent in Afghanistan. I agree with you that we don't have an actual physical border, but Afghanistan shares a 105 km border across the Wakhan corridor with Pakistan occupied Kashmir which is the Union territory of Jammu and Kashmir.

After gaining physical control of Pakistan occupied Kashmir, we will have a more than 100 kilometre-long border with Afghanistan -- conceptually, legally, cartographically and physically.

India is a stakeholder because Indian territory is under Pakistani occupation. And the only thing unresolved is for us to gain control over that territory.

Right now, we are merely observing the situation in Afghanistan. Over the longer-term, our policy has to be based on there being a shared border, even if this is a goal rather than a reality right now.

This gives us vital stakes in Afghanistan. A border would give us greater capacity to influence events there. There has to be forward thinking.

In the last 2,500 years, all of India's invasions, except those of Europe, were land-borne. Afghanistan was the launching pad, a strong power in that region has been hugely problematic for India.

One of the tragedies of our history is that we had to fight our battles against foreign invaders right in the heartland -- in Panipat, in Tarain and so on.

I'm not saying we need to fight wars in Afghanistan, but our diplomacy has to be based on a forward strategy.

Therefore, India has to pitch a tent. Having a conversation and a friendly power in Afghanistan is vital to India's defence.

The Chinese are putting a lot of pressure on us from the east in Ladakh, Arunachal Pradesh and Sikkim. They have control over Pakistan.

Pakistan's relationship with China is under-appreciated and under-studied internationally. It is an all-weather relationship which will remain stable in the foreseeable future.

With the rise of India, Pakistan has become even more important for China.

Pakistan is more dependent on China today than it was on the United States in the 1960s. Therefore, it is possible for China to act together with Pakistan and even the Taliban to create new points of pressure from the AfPak region to destabilise Kashmir and other parts of India. 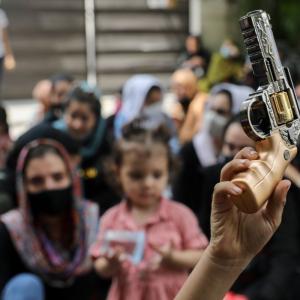