'Development is not just malls; people's lives must improve'

'People may think that because my father was in the film world and politics, things are easy for me.'
'It is not easy at all.' 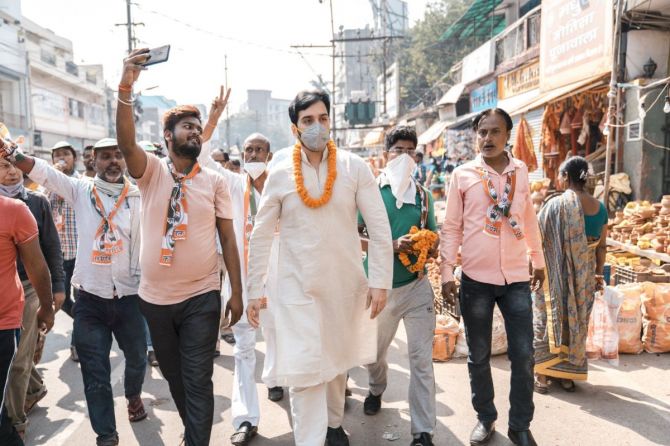 "It is a challenge to fight against a party that has all the dhan shakti, jan shakti and has held the seat for almost 25 years, but that is also an advantage because people realise that they need a change." Luv Sinha, 37, actor-politician Shatrughan Sinha's son and Bollywood star Sonakshi Sinha's elder brother, is pitted against Nitin Nabin, the three-time legislator from Bankipur, a seat that has remained with the Bharatiya Janata Party since 1995.

The other candidates along with Sinha in the Bankipur fray include Pushpam Priya Choudhury and Manish Barriarr, alumni from the London School of Economics and Oxford respectively.

Contesting his first election, Sinha tells Rediff.com's Archana Masih, "I genuinely want to make a change in my capacity as MLA. I think you fail when you over promise and under deliver."

What is the toughest challenge contesting against a 3-time BJP MLA?

I am fighting against the entire strength of the BJP - in terms of money power and organisational structure.

Their cadre is also very strong and my own party workers are working very hard, but we are aware of these aspects of our opponent.

It is a challenge to fight against a party that has all the dhan shakti, jan shakti and has held the seat for almost 25 years, but that is also an advantage because people realise that they need a change. Not much work has been done in this constituency as it should have.

You worked in that area as part of your father's Lok Sabha campaign last year. What have you learnt from that experience?

Biharis are very kind-hearted and have a strong desire for things to improve. That is where they have been let down by the state government and more than that the central government.

Shouldn't the central government have been more proactive knowing very well that Bihar is ranked amongst the lowest in the development index?

Biharis have been let down by both the state and central governments.

What are the top things you want changed in Bihar?

Biharis are very hard working and intelligent people, but why do most Biharis have to go to other states to get an education?

Why do they have to go outside to get a job?

These are major issues.

Secondly, the health care system is underdeveloped. If someone gets unwell, the choices are very limited here.

The student teacher ratio in Bihar is 1 teacher for 1,500 students.

The average earning of a Bihari mazdoor is Rs 300 compared to Rs 1,200 in Andhra Pradesh.

Why is the unemployment rate in Bihar 46.6% which is double the rate of the nation? All this bothers me a lot.

The intention is to fix all that I can.

Why politics? Was it a natural path to follow in your father's footsteps?

People may think that because my father was in the film world and politics, things are easy for me. It is not easy at all.

I genuinely want to make a change in my capacity as MLA. I think you fail when you over promise and under deliver.

I am promising whatever I can deliver in my capacity if I am elected.

People think politics is about power; it is about a lot of hard work.

I have always been politically inclined. This opportunity came my way because the Congress party also saw what work I had been doing last time.

The party has a lot of good and dedicated workers and I am humbled that they gave me an opportunity.

I believe the citizens of Bihar will give me a chance and I am here to fight.

What are the things you have learnt from your father as a politician and what advice has he given you?

My issues are with the disappointing performance of the state government. I don't have anything personal against my opponent.

I have learnt that in politics no one should be your personal enemy and your views should always be in favour of the people.

Sometimes you may not agree entirely with the party's view and that is not a bad thing because that it what politics is all about. This is what I have learnt. 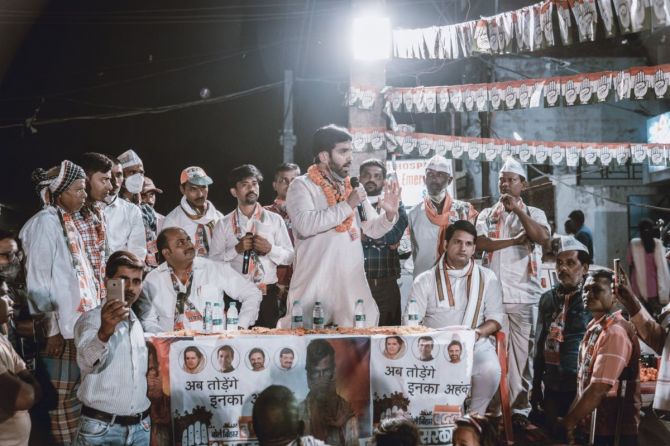 Why did you choose the Congress and not the RJD?

It would be arrogant to say 'I chose'. The party chose me. They must have seen my work and I am grateful for that.

What impresses you about the Congress?

I have seen the BJP before 2014 and respect how they fought elections and what it was under Atal Bihari Vajpayeeji.

The Opposition had different views, but was not seen as your enemy. Now I feel the BJP's political outlook has changed a lot. It has become very personal, vindictive and ruthless. I don't agree with that style of politics.

There should be a balance in politics and that has been eradicated from the BJP in the last few years.

The goal of all parties should be to work for the people.

The Congress is not denying the fact that it has slipped down and is not as strong as what it was, but it is willing to work and change it.

I see sincerity and the realisation that we need to work hard.

I believe they are on the right path.

What are the challenges of campaigning in Covid times?

I wear a mask and ask others to be very careful. The health infrastructure in Bihar is very bad.

AIIMS was brought to Patna due to the efforts of my father (the health minister in the Vajpayee Cabinet), which was some years back, so you can imagine!

Have you had a chance to meet the other young opponents: LSE graduate Pushpam Priya and Manish Barriar from Oxford?

No, I haven't, but I am glad that young, educated and good people are coming forward in politics.

We are fighting against a very strong central government, but I know I can win over the people.

My fate will be decided by fellow Biharis. I think they also want a change.