News
Business
Movies
Sports
Cricket
Get Ahead
Money Tips
Shopping
Sign in  |  Create a Rediffmail account
Rediff.com  » News » 'Why should the CM be held accountable every time disasters happen?'

'Why should the CM be held accountable every time disasters happen?' IMAGE: Residents wade through a water-logged street in Sangli, Maharashtra, after the Krishna river flooded the districts of Sangli, Kolhapur and Satara. Photograph: PTI Photo

Retired IAS officer Mahesh Zagade, a distinguished bureaucrat, has been vocal against the way Maharashtra's local bureaucracy handled the flood situation when river Krishna wreaked havoc in the districts of Sangli, Kolhapur and Satara where the death toll has now crossed 40.

"The revenue and water department administrations should have assessed the situation on an hourly basis and alerted their superiors like the secretaries of these departments. They could have then got in touch with their counterparts in Karnataka to release water (from Almatti dam)," says Zagade, former principal secretary, general administration department, Maharashtra in this interview to Rediff.com's Prasanna D Zore.

Why are you not satisfied with the way the Maharashtra government has handled/is handling the flood situation in Sangli, Kolhapur and Satara?

It is wrongly reported that I am not satisfied. I am very clear that the calamity that occurred after the torrential rains in the catchment areas of Kolhapur, Sangli and Satara district could have been averted or minimised.

How could the state administration have averted this or handled it better?

Whenever the people, government and media think about disaster, the only thing that comes to mind is disaster management. Nobody thinks about disaster prevention.

The miseries of human life, animals and financial losses can be prevented if we implement disaster prevention management measures.

The moot issue is how the administration reacts to information that is already available due to extensive use of modern, scientific means today. That is what must be questioned and that is what I have done.

The issue got serious because of the level of precipitation that happened on a huge scale in these districts. But we don't live in the 16th or 17th century that there was no information of the deluge that was coming. The met department had given the warning (of heavy rainfall in these districts).

What the administration could have done once the villages (in these three districts) began to submerge was request the discharge of water from Almatti dam (which is downstream in Karnataka). The (Maharashtra) administration asked for release of 5 lakh cusecs of water from Almatti dam only after the floods spread across these districts in Maharashtra. This is how they reacted.

Had this been done before the villages were submerged, it could have saved precious lives and financial losses.

By administration, you mean the Maharashtra government should have requested the Karnataka government for the release or water from Almatti dam?

No, I am talking about the local administration; the collectors in these three districts should have escalated the matter to the state government level. The revenue and water department administrations should have assessed the situation on an hourly basis and alerted their superiors like the secretaries of these departments and they could have got in touch with their counterparts in Karnataka to release the water (from Almatti dam).

Had this not worked then it could have been escalated to the level of the chief minister. It is not known if this did or did not happen,; but probably this did not happen. This mechanism was activated only when the situation went out of control.

But the state government too could have proactively asked the local administration in these three districts about how bad the situation was and done what needed to be done? That does not seem to have happened…

I am not speaking from any theoretical perspective. I have done this when I was the district collector of Nashik.

I was the collector during the 2005 floods when on July 26 Mumbai was fighting a huge deluge due to torrential rains and many lives were lost. Normally, when such rains happen in Mumbai they reach Nashik in a day or two. Assessing that Nashik too would face similar fury in a day or two, I got water released from major dams like Gangapur and Darna \in Nashik district to a very safe level.

It was not a surprise that within the next two days Nashik witnessed unprecedented rains but since we had already released dam waters to a safe level, the district did not face the fury of floods in 2005. When the rains started we closed the doors of Gangapur and Darna dam and the entire deluge was collected in these dams.

Coming back to recent floods, the local administration in these three districts too could have followed these measures. I will not say much about the political leadership but now so much help is given to the flood affected but at what cost?

People have lost their lives and suffered huge financial losses.

You have also been very critical about "lack of political will" and "new bureaucratic culture" in the state.

I am not talking about 'political will' but our administrative culture focuses only on disaster management. My contention is, if you focus on disaster prevention you can save lives and financial losses.

Everybody should act with vision and promptness and if somebody in the (command) chain is not acting promptly, then there must be checks and balances at various hierarchies and the (topmost) hierarchy is at the political level. The political (hierarchy) must also be sensitised if the local bureaucracy is working the way they must during such calamities.

The government is spending huge budgetary allocations for salaries of the local bureaucracy, and I am not talking just about the revenue or water resources departments.

You have suggested action against "those who failed to take preventive steps in such situation".

The people who die during such calamities become statistics and people forget about them with the passage of time. We don't give much importance to human lives but someone has to be held accountable for not doing what they are supposed to do.

The bureaucracies of revenue and water resources department are responsible to act with alacrity in such situations. If action is not taken against these people, then in the future too people will keep losing their lives to such calamities.

Are there any standard operating procedures that these departments must follow under such situations?

Before monsoon the chief minister holds a meeting of the municipal commissioners, district collectors, and departmental secretaries about the measures to prevent disasters during the monsoon or measures to initiate in case of calamities.

There are detailed procedures in the disaster management plans of the districts but these must be incorporated before a calamity strikes.

Being the chairman of the Disaster Management Authority, shouldn't the final responsibility rest with the chief minister of the state?

The bureaucracy has to be very sensitive to such issues and the political leadership is to guide the bureaucracy.

Aren't you making the bureaucracy the scapegoat while not holding the political leadership responsible for such mismanagement?

Are you saying that the political bosses should not be held accountable for such mismanagement?

What I am saying is that had the situation unfolding in the three districts been escalated by the (water resources department) secretary in time to the chief minister that the Almatti dam water is not getting released, the state government would have acted promptly.

But couldn't the chief minister of Maharashtra proactively taken the lead and asked about the situation in these three districts and ordered the secretaries and the subordinate hierarchies to take prompt and suitable action?

In the future, if such calamity were to strike again, being a former bureaucrat yourself, you are saying that the bureaucracy should be held responsible?

Of course, I am saying that. The bureaucracy has to act with responsibility and every time they don't have to look towards their political bosses and then blame them for not being responsive.

The political leadership can be blamed only if it doesn't allow the bureaucracy to function in the manner it has been designed to respond to such situations. Abhinandan likely to be conferred Vir Chakra on I-Day 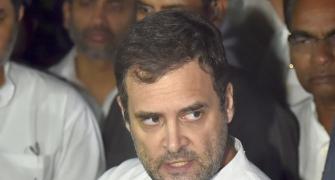 When can I come to J-K Maalik ji: Rahul to J-K Guv