'Police officers have to meet Dalits and other communities, find out about issues that could lead to law and order problems.' 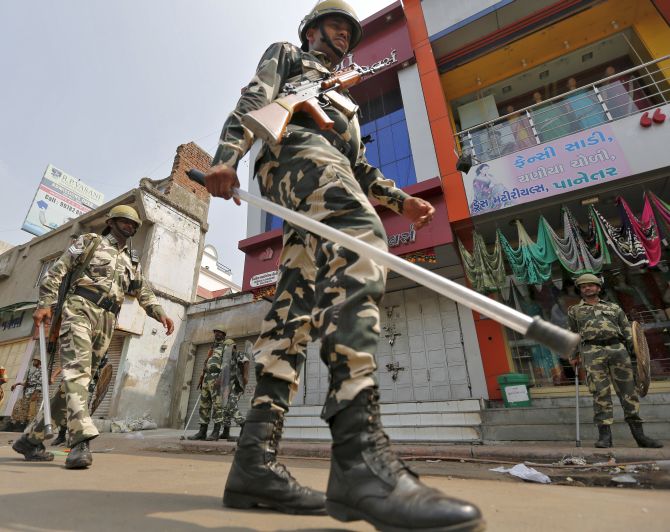 IMAGE: Police personnel in Gujarat have been directed to visit 'sensitive' villages and submit reports on the issues faced by the people within three months. Image used for representational purposes/Amit Dave/Reuters

On June 20, an order from Gujarat Director General of Police Shivanand Jha directed police personnel to visit 'sensitive' villages in the state to understand the ground situation and resolve problems.

In a communication sent to all senior officers -- including district superintendents of police and police commissioners of various cities -- Jha asked them to plan 'village visits' during the next three months to understand the problems of Dalits and resolve them on the spot.

Such visits, Jha noted, are needed as several incidents of Dalit atrocities have surfaced recently in different districts of the state.

'All those villages where such conflicts between communities were reported in the past or (where) there exists a possibility of conflicts in future should be considered as 'sensitive villages',' Jha stated in his directive.

The DGP's order came against the backdrop of a 13-year-old Dalit boy being allegedly beaten up by Rajput youth in Bahucharaji town, Mehsana for wearing mojdis, a type of leather shoes.

Gujarat Deputy Superintendent of Police Gaurav T Jasani tells Rediff.com's Prasanna D Zore that such visits have been on the backburner of the state police's priorities, but now there are plans to 'revive' them.

This order is not just about Dalits or their problems.

Police officers have been asked to visit various villages and understand their problems, their complaints, their issues and to address them.

If the issues are not related to the police department, then such issues will be forwarded to the concerned departments for redressal or those departments will be sent a report.

Does that mean that the DGP's order is to address law and order problems and not about social problems faced by Dalits in the state?

Bilkul, bilkul (Exactly, that's what it is about).

Was this order issued after the Bahucharaji incident in Mehsana where a Dalit boy was allegedly beaten up by Rajput youth?

Bilkul (That is right). That (this Bahucharaji incident) is also a law and order issue.

A Dalit boy was beaten up in that village. This order (the DGP's note) was issued in that context.

How many police officers will visit these villages?

Our police officers will visit all the villages that are sensitive.

Has the DGP's office identified which villages qualify as 'sensitive'?

The work of identifying the villages is being done by two departments of the state police.

One of them is the local intelligence branch of the district atrocities cell.

From the DGP's office, the CID (IB) is doing this job. 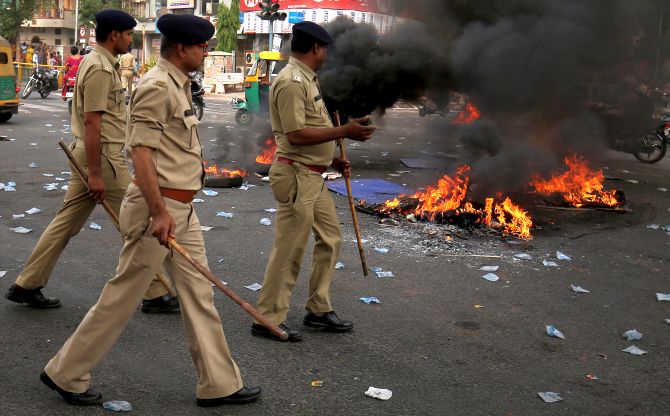 Why this sudden move to ask officers to visit sensitive Dalit villages and compile a report within three months?

These visitations have been mentioned in the Police Manual of 1975 and this is not the first such circular.

Many such similar circulars were issued earlier too. While these (such visits) had been on the backburner for some time in the (state) police's priority list, we have decided to revive them and strictly enforce them and so the order was issued.

What are the exact instructions given to police officers visiting such sensitive villages?

They have to visit these villages, meet leaders belonging to Dalits as well as other communities, find out their issues related to old enmity, law and order problems, land related issues, and find out if people are able to exercise various rights guaranteed by our laws or find out issues that can lead to law and order problems in the future.

Such issues will be studied and we will take decisive action in matters that are under the jurisdiction of the state police.

On issues that fall outside the purview of the state police, a report will be compiled and submitted to the concerned departments and ask them to solve them at their level.

Why this urgency now? Is it because atrocities against the Dalits have been on the rise in Gujarat?

I don't agree that atrocities against the Dalits have been on the rise in Gujarat.

It is no different from what is happening in other states that such atrocities have increased only in Gujarat.

These visits are not something new and have been part of the Police Manual of 1975. This is not anything new. 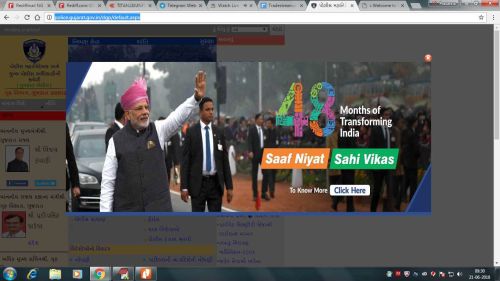 If the order to visit 'sensitive Dalit' villages wasn't enough, it seems that the state police has also taken to promoting Prime Minister Narendra d Modi's latest catchphrase and scheme.

When asked why the state police was highlighting the Centre's achievements, after much hesitation Deputy Superintendent of Police Gaurav T Jasasni said, "We (the state police department) do not undertake the maintenance of our Web site. It is taken care of by the IT (information and technology) department of the state government."

Interestingly, Web sites of police departments of other BJP-ruled states like Maharashtra, Uttar Pradesh, Haryana, Madhya Pradesh, Chhattisgarh or Rajasthan do not have this advertisement for the central government.

"It is not the business of the law and order machinery of Gujarat state to promote propaganda or slogans coined by Prime Minister Modi," Shaktisinh Gohil, Congress national spokesperson and former Opposition leader in the Gujarat Vidhan Sabha, said.

Commenting on the Gujarat DGP's order that police personnel visit Dalit villages, Gohil said, ";The state government has suddenly woken up because they want to show the Dalits that they care for them. Such an order (issued by the Gujarat DGP) is nothing but the government blatantly using the law and order machinery to create a Dalit vote bank for the BJP."