'Nowhere is it written in the Constitution that Ravan's effigy must be burnt.' 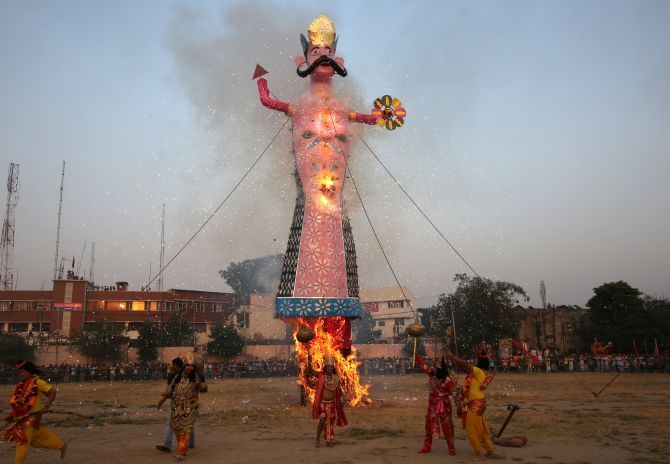 The Bhim Army led by Chandrashekhar Azad 'Ravan' has demanded a ban on the 'Ravan Dahan' (burning of Ravan's effigy) in Maharashtra this Dussehra.

"It is only now that we have come to know that the upper castes have taught us wrong history," Ashok Kamble, the Bhim Army chief in Maharashtra, tells Rediff.com's Syed Firdaus Ashraf.

Why are you seeking to stop the burning of Ravan's effigies during Dussehra?

We have said that Ravan's story is of many years ago. At that time the upper castes were ruling India.

These upper caste people say Ravan abducted Sita, but they do not tell you why he did that.

He did that because his sister Surpankha's nose and ears was cut by Lakshman.

As a brother, Ravan was bound to get angry, therefore he kidnapped Sita.

And he did that because he could not find Ram and Lakshman.

We feel that burning Ravan's effigy is wrong as in Sri Lanka and many places in South India, people worship Ravan.

In Maharashtra, in places like Akola, Amravati, even in Nashik, there are temples of Ravan.

Yes, people pray to Ravan. Go to Akola, you will find out.

In Jharkhand 10 days ago, there was a protest to demand that the burning of Ravan's effigy must be stopped.

In Uttarakhand too, people protested against the burning of Ravan's effigy.

In Palghar (Maharashtra) two days ago, there was a meeting where they said Ravan is their kuldevta (clan deity) and the Constitution has given us this right that our sentiments must not be hurt.

If our sentiments are being hurt, then this tradition of burning Ravan's effigy has to be stopped.

For so many years no one has thought about this. Why do you have a problem now?

Earlier, the voice of Adivasis was weak. Now they are getting united so their voice is being heard.

Why are you creating a new narrative of Ravan worship?

This is not a political stunt. The Bhim Army is a social organisation.

We are saying this because history has projected Ravan wrongly.

Ravan was a villain. Everyone knows about it.

When the Ramayana was written, only the upper caste people had the right to read. Others were not allowed to read or write.

So these upper caste people wrote their own history.

Now when others have started reading and writing, they are coming to know about true history. And they want to correct all those wrongs.

You read books by Periyar (E V Ramasamy Naicker, the late Tamil social activist). He wrote that the way Ravan has been depicted is wrong. The real face of Ravan was something different.

When Sita was kidnapped she was kept in the Ashok Vatika by Ravan. He had women as her guards, not men.

He kidnapped Sita because he could not find Ram and Lakshman.

You are giving a new twist to the Ramayan.

Read all the books on the Ramayan and you will find the truth.

Lanka under Ravan was a happy place. There was no injustice under Ravan's rule.

People were happy under Ravan's rule. Only because of this incident (the war with Ram) you cannot say he was a demon.

Who started the war? It was Lakshman. He cut Surpankha's nose and ears.

Nowhere is it written in the Constitution that Ravan's effigy must be burnt.

Why are you meeting police officers over this issue?

We are meeting police officers in 36 districts in Maharashtra to tell them to stop the burning of Ravan's effigy.

You are saying this after 70 years of Independence!

I was born in 1986. It is only now that we have come to know that the upper castes taught us wrong history.

What will you achieve by not allowing the burning of Ravan's effigies?

There will be brotherhood between the Adivasi samaj and upper caste people.

There have been no protests against the burning of Ravan's effigy by the Adivasis.

It happens, but no newspaper covers such news.

It is only now when the Bhim Army raised this issue that the electronic and print media are speaking about this issue.

You go to Palghar district. You will see that the Adivasis have been protesting against the burning of Ravan's effigy for so many years. There has also been a petition filed in Nagpur.

This time we are taking a pro-Ravana rally in Kandivli (north west Mumbai).

You are unnecessarily instigating people.

I don't think that way. What is wrong is wrong and that needs to be corrected. They don't have the heart to watch Ravana burn! 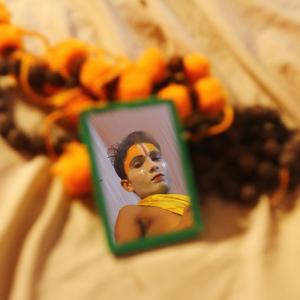