News
Business
Movies
Sports
Cricket
Get Ahead
Money Tips
Shopping
Sign in  |  Create a Rediffmail account
Rediff.com  » News » 'Why are they singling out information commissioners?'

'When they give irrational and illogical reasons, that obviously raises suspicions that there is something wrong'

'Anybody in power dislikes the RTI' 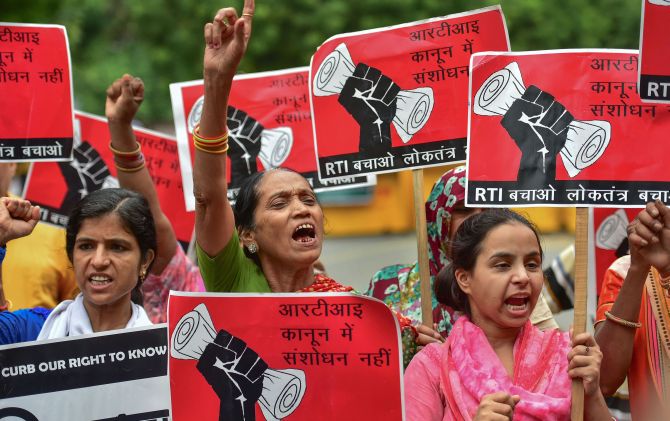 IMAGE: Activists protest against the amendments to the Right to Information Act that have been approved by Parliament, at Jantar Mantar, in New Delhi. Photograph: Arun Sharma/PTI Photo

Shailesh Gandhi, former Central Information Commissioner and Right to Information activist says that any government in power will be the real beneficiary of the dilution in the RTI Act because of an amendment that allows the government to decide the salaries and allowances of the central and state information commissioners and their subordinates.

"When the British crushed the uprising of 1857, we could have accepted defeat and done nothing about it. But we didn't.

"A nation that could throw a foreign oppressor out of the country, today can't say that we have our Constitution, our democracy and the right to vote, but we can't do anything about this amendment," Gandhi told Rediff.com's Prasanna D Zore in an interview.

Now that the amendment to the RTI Act has been passed by both houses of Parliament, how will it impact people's right to seek information?

It's an indirect thing. Let's say I reduce the powers of the police or make them feel insecure unless they listen to me. This is what has actually happened (by this amendment).

The chief minister says, by law, I will decide the salaries of the police and keep changing it according to the law.

The chances are the police will only act under pressure, which is what is already happening (with the police administration in India).

Are you saying that all the people in charge of providing information under RTI are corrupt or will buckle under government's pressure?

They are not corrupt or buckle under pressure.

Why does the police listen only to the government? Even when they give an illegal order, the police follows it. I am not saying that everybody's corrupt in India.

But you are saying that by giving the government the power to decide the salaries and allowances of information commissioners, they will be controlling them.

The way this amendment is structured is, they could give three-month tenures to the commissioners and know very well that they could change them if they don't give orders in the government's favour.

But there are lot of ifs here... right?

My simple point is, if they had something in mind which was not so objectionable, then why did they not share it for discussion with the citizens of India?

Last night (July 25) I was in a discussion with BJP (Bharatiya Janata Party) spokesperson Gaurav Bhatia and he said we will unveil later on (how and why the government will not interfere with the information sought under the RTI Act).

I said why do you want to explain that later? And he said, have patience (with) and faith (in this government).

That's not the way the system works.

He kept asking us to wait for further announcements on it. He failed to give any valid explanation (about what announcement the government will make to make the selection process of information commissioners more transparent).

Such explanations are completely juvenile.

The most popular reasons for bringing in the amendments are: They say that election commissioners and judges are Constitutional authorities and these (information commissioners) are statutory authorities and yet they wield similar powers. But even now (after the amendment), there are lots of statutory bodies which have been equated to the Constitutional bodies.

They are saying they are not touching on the autonomy part of the law. But the truth is, why are they doing this?

The NGT (National Green Tribunal) and the NHRC (National Human Rights Commission) and their heads were not envisaged to be Constitutional authorities. The heads of these statutory bodies are at the same level as the Supreme Court judges.

So then why are they singling out just the information commissioners for this special treatment? They don't have any answers for that.

I don't suspect my government when it gives me reasonable answers. Does the government have any rational answers for why only the RTI commissioners have been brought under the ambit of this amendment and not heads of other statutory bodies?

The DoPT minister (minister of state for department of personnel and training, Jitendra Singh) said on the floor of the House that the decisions of the (information) commissioners can be challenged in the high courts.

By implication, he said, this makes the information commissioners lower in hierarchy than the high court (judges).

In writ jurisdictions, people approach the high court even against the orders of the President (of India) and the governors. Does that imply that these Constitutional authorities are lower in hierarchy than the high court?

Such arguments are completely juvenile.

And they are not engaging in a discussion and giving proper reasons. When they give irrational and illogical reasons, that obviously raises suspicions that there is something wrong.

Their explanations are completely vague and flawed. They want us to have faith in this government but institutions don't work on faith. That's fundamental to democracy.

Don't leave it on faith; do it in writing.

In the last 14 years, nobody had an issue (with how CICs are appointed and how their salaries are fixed).

Has any SC judge raised objection as to why the status of CICs is equal to theirs?

Why should the government fix what isn't broken?

What major problems can this amendment bring to the functioning of the RTI Act?

The ground reality is that a majority of commissioners are selected based on political patronage. In effect, they are not really independent people.

A few commissioners do and will always break out of the fold. There have been fiercely independent commissioners who passed fair and fearless orders, which have been disliked by the powers that be, and that includes the Congress too.

So, if there are some independent commissioners who are giving orders which the government doesn't like, their independence will get clipped still more because now the government controls the selection process.

It is only a few commissioners and a few orders that are really pro-transparency.

Today, it (pro-transparency orders) may be at a level of 5 per cent or 10 per cent. Significant orders that go against what would be considered established interests of the government in a major way are very small and now, after this amendment, are likely to go down further.

I don't know if you realise that for various commissions like human rights, women's rights and so on, there are no fixed criteria for the selection of commissioners.

With confidence I can say that the entire selection process is flawed.

By this amendment, they are destroying the system of checks and balances. They're trying to control, or at least obtaining the methods of controlling, the commission. It's just not desirable.

How do you and other activists plan to maintain the usefulness, effectiveness and sanctity of the RTI Act?

Honestly, I don't know. But we have to keep fighting our battles.

Let's see if we can convince the President to send it back.

What difference will the President sending it back for consideration to the Lok Sabha and Rajya Sabha make, now that this government has a brute majority in the Lok Sabha and they have the support of the Biju Janata Dal and the Telanagana Rashtra Samiti, which helped them push through the passage of the RTI Act amendment in the Rajya Sabha?

There's also optics as I call it. We may not be able to convince the President to send it back but in my opinion the citizens should continue agitating (against this amendment).

When the British crushed the uprising of 1857 we could have accepted defeat and done nothing about it. But we didn't.

A nation that could throw a foreign oppressor out of the country, today can't say that we have our Constitution, our democracy and the right to vote, but we can't do anything about this amendment.

If the bill is there which we don't like, then we should keep protesting.

Maybe the bill will get cancelled or taken back after one year, two years, three years.

Or, it will give a message to the government that if you pass bills of this nature, which restrict fundamental rights of its citizens, and I do believe that the amended structure of the RTI is an attack on our fundamental rights, citizens will protest.

We should have the confidence and tell the government to take this back.

Why do you think this government brought in this amendment, as you said for 14 years since the law was passed in 2005 nobody had any problem?

In my opinion, they are arrogant now. They have this feeling that we know what's right. Everybody in power believes he knows what's right.

I also have a subsidiary theory that they may be testing out if they will have enough members in the Rajya Sabha to support the instant talaq bill.

That's why the hurry to get the amendment to the RTI Act passed in Rajya Sabha. They want to establish that they can manage a majority in the Rajya Sabha.

They wouldn't want to have a bloody nose over the passage of instant talaq bill in the Rajya Sabha.

Who is the real beneficiary of this amendment?

The government that can control the commission's functioning. 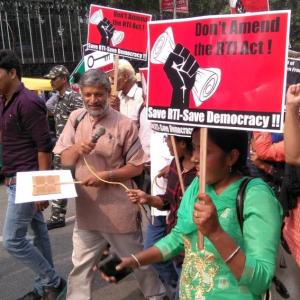 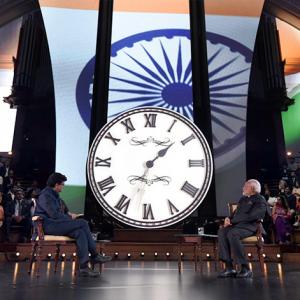