News
Business
Movies
Sports
Cricket
Get Ahead
Money Tips
Shopping
Sign in  |  Create a Rediffmail account
Rediff.com  » News » Why are our soldiers killing their own?

Why are our soldiers killing their own?

'The feeling of being part of one family, which is an essential part of the armed forces ethos, is weakening.'
'And when there is a feeling of distrust, then even a small spark can lead to an explosion.' On Thursday, a Central Industrial Security Force jawan gunned down four of his seniors in Bihar, apparently for being denied leave. Reports now suggest that the jawan was 'mentally ill'.

In the past too, incidents of fratricide have been reported in the defence and paramilitary forces.

Prakash Singh, former director general of the Border Security Force, Uttar Pradesh police and Assam Police, speaks to Veenu Sandhu about the reasons for such incidents and the pressures soldiers face.

What are the possible triggers for such cases?

The CISF is today the most coveted of the Central Armed Police Forces (colloquially referred to as paramilitary forces).

Most young boys today want to join the CISF because the work conditions are reasonably good, unlike in the BSF and the Indo Tibetan Border Police where they are very tough.

Such an incident happening in the CISF is rather strange.

I don't understand why this man's problem could not be diagnosed early and why they couldn't see that his impatience and anger was reaching a boiling point.

It should have been possible for the local commanders to see that.

Do soldiers today face more stress than they did in the past?

A battalion normally has six companies. Of these, one company is supposed to be always kept on training, which includes rest and recuperation.

But these days, there is heavy demand for Central Armed Police Forces from the states, which have virtually abdicated their responsibility in maintaining law and order.

The states put a lot of pressure on the central government for these forces and the Centre invariably relents.

As a result, all the companies are deployed on duty and there is no strength left in the reserve for rest, recuperation and training.

The battalion commanders now have a problem because they are required to maintain a certain minimum level of manpower strength.

So, there is a genuine administrative problem in letting people go on leave when the commitment is heavy and deployment is full.

Normally this should not happen.

A battalion has a minimum strength of 90 people and the minimum operational strength required is 75.

So, it becomes a very serious problem sometimes when men are on leave and others want to go on leave, but you cannot reduce the strength beyond 75.

Can the Centre not put its foot down and ask the states to deal with the problem if it is possible?

Yes. It has today become nothing short of a scandal.

Some time back, Uttar Pradesh asked for a thousand companies. That’s an absurd request. I can say that as the state’s former director general of police.

Much of these demands can be described as peshbandi -- where you inflate your demand to an extent that the other party is not able to meet it.

So then, if something goes wrong, you can turn around and say, 'Look, I had asked for this much force, but my demand wasn't met, that's why things went wrong.'

In Haryana, during the riots, there was such a lot of army deployment that they could have fought a war with Pakistan.

This happens because the district authorities simply abdicate their responsibility.

Someone should ask the district magistrate and the district superintendent of police, 'What the hell are you doing with the force that is already there?'

We used to take pride in managing things with our own resources and depending the least on outside help.

So yes, there is mounting stress and strain because of the heavy deployment of the forces arising out of the excessive and unreasonable demands of the states.

What could be the other reasons? Lack of bonding in the forces?

The one thing that has been happening in all the forces is that the camaraderie and rapport between seniors and juniors, which was there earlier, is now weakening.

Between the officers and men, particularly, there is a sharp gap now.

Officers often complain that the men do not support them and desert them in the event of a crisis.

And the men complain that the officers relax, while they push the soldiers into tough jobs.

Both these versions arise out of the gulf between the officers and the men.

The feeling of being part of one family, which is an essential part of the armed forces ethos, is weakening.

In the past, if you could not send a man on leave, he understood your compulsions and compromised for your sake.

We would also sometimes take risks for the sake of the jawans.

So, there is something lacking somewhere in leadership.

And when there is a feeling of distrust, then even a small spark can lead to an explosion.

That is what keeps happening here and there in the forces.

External aids like psychologists and yoga classes bust stress, but would not be required if there were strong feeling of brotherhood between the officers and their men.

IMAGE: The site where a CISF constable opened fire and killed four of his colleagues in Aurangabad district, Bihar, January 12, 2017. Photograph: PTI Photo 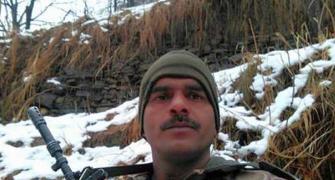 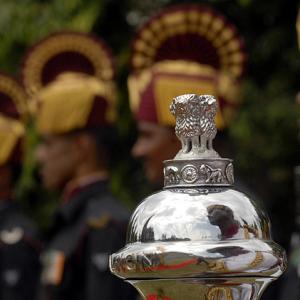