'Over 50 crore Indians are currently suffering from a livelihood crisis, something to which the whole country had shut its eyes to for the past six months.'
'We woke up only after the IPL was affected.' 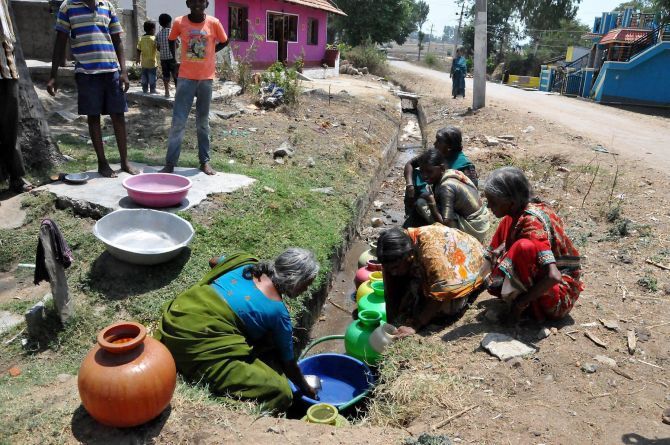 Since last October, Yogendra Yadav has warned that the water crisis will be very severe in several states this summer, but unfortunately nobody heeded his warning.

After he toured drought-affected regions in Karnataka, Telangana, Maharashtra, Madhya Pradesh and Uttar Pradesh, Professor Yadav -- who formed the Swaraj Abhiyan and Jan Kisan Andolan after being expelled from the Aam Aadmi party -- wrote to the chief ministers of these states on how they could tackle the water crisis, but none responded.

The political scientist and psephologist -- who is often seen on news television channels analysing news trends and election results -- spoke to Syed Firdaus Ashraf/Rediff.com after the Bombay high court ordered Indian Premier League matches to be shifted out of Maharashtra after April 30.

The Bombay high court has said there will be no IPL matches in Maharashtra after April 30. How do you see this order?

There is no direct relation, but there's a symbolic relation. The IPL is not a sport, but an extravaganza. It is a festival.

It is a tamasha and there is something obscene and vulgar about holding this kind of festivity in the middle of a drought.

And how would not holding the IPL matches help? It would help not in terms of litres of water and so on; all these arguments are silly. This entire controversy, this judgment and the petition has served one cause -- it has reminded this country that there is a severe drought.

Over 50 crore (500 million) Indians are currently suffering from a livelihood crisis, something to which the whole country had shut its eyes for the past six months.

The drought began in October 2015. We conducted our first Samvedna Yatra on October 2 and the whole country was ignoring the situation. If this IPL controversy wakes the country up to this reality, I cannot complain. You were among the first to warn that India is facing a drought, but nobody took you seriously. Why do you think this happened?

Because, in this country, opinion making is the monopoly of what we call the middle classes, which is actually the tiny 5 per cent of the ruling class of this country.

When we say nobody takes it seriously, we exclude those 50 crore drought-hit people. But nobody in the opinion-making (middle) class, the producers and consumers of the media, does. For them, this is not a real life issue.

And if you noticed, the whole thing became big news only when it touched urban India. We only woke up when there was a drinking water crisis in Latur town.

Thousands of villages have been suffering a much worse drinking water crisis for the past 3, 4 months, but this was not news. A town starved of water is news.

Then again, it could have been news for one day, but it became really big when it touched the IPL, the religion of this country.

Yesterday (April 12) on a television show, people termed the petition against the IPL as 'blackmail and headline-hunting.' For the last six months, people like me tried all reasonable methods.

I travelled to the drought-affected districts, wrote articles. We spoke about the crisis, we conducted surveys. We wrote letters to all the officials. We took the case to the Supreme Court. Did anyone hear? Did anyone pay attention?

Once you said something about the IPL, the whole country sits up and pays attention. How can I say that this is wrong?

If this country pays attention to serious matters only when it touches cricket, then I would say, 'Alright, let everything be done through cricket.' That can be the new language of politics in the country.

So nobody bothered about the water crisis when it affected villages, but the moment it touched the cities, everyone started getting bothered.

The water crisis is still mainly in rural areas. It is not only affecting humans, but cattle also. It is not in Marathwada alone, but in about 40 per cent area of the country. The drinking water problem is also affecting Bundelkhand in Uttar Pradesh and Madhya Pradesh.

It is a debt trap because farmers are not able to repay loans. It is an overall livelihood crisis now.

When you wrote to chief ministers of various states in October 2015 regarding the drought situation, what did they say?

I wrote letters to eight different chief ministers during my yatra. In the letters, we gave details of the ground situation and also mentioned the steps they they needed to take immediately.

I wrote to Maharashtra Chief Minister Devendra Fadnavis on October 8. But I did not get any response from him or anyone else.

The Maharashtra government is saying they have dug up 3,000 wells under the Jalyukta Shivar plan. What happened to those wells? Where have they dug up those wells?

This Jalyukta Shivar has nothing to do with solving the immediate water crisis. It is a long-term measure. If it works, it will recharge ground water in the long run.

Recharging of ground water is a good idea, but that is not what you need to do to solve the problems of the next four months.

In October, if you know that you would face a drinking water crisis in April, then the Jalyukta Shivar is not the solution because that will work only after at least two years. I wouldn't say it is a bad scheme, but this is not the solution to the current problem.

What should the governments in these eight states have done?

Some of the most effective and routine things they should have done, about which everyone knows, is to repair canals, hand pumps and water supply channels and identify affected areas. These are routine matters about which every bureaucrat knows.

All this has been written in a Government of India document, Manual for Drought Management. It spells out the steps that need to be taken to avoid this (water crisis).

But, politically, a more difficult thing which they needed to do was to disallow growing sugarcane in drought-stricken areas. Sugarcane is one of the most water-guzzling crops. We gave this suggestion also.

Second, opening of new sugarcane and liquor factories could have been postponed by six months. Our third suggestion was to regulate water bottling plants, which take away some of the best potable water.

Moreover, diverting water for industrial purposes can't be a priority at a time when you have such a serious water crisis. We had suggested regulating this. These are not new suggestions. In Maharashtra, the Chitale Commission, headed by agriculture scientist Madhav Chitale, had given these suggestions in 1999.

It said that such a land cannot sustain sugarcane cultivation. Sugarcane farming, as you know, is directly related to the vested interests in politics. Sugarcane cooperatives and lobbies control Maharashtra politics and no one dares to touch it.

I thought the Congress and Nationalist Congress Party control the sugarcane cooperatives, and not the Bharatiya Janata Party and the Shiv Sena which rule Maharashtra now.

That was the case earlier. But over the years, everyone has developed an interest in it.

There is no water even when people dig deep in Marathwada. What is the reason?

Groundwater has actually gone down. Much of the Marathwada region is a plateau with a rock formation. What happens in rocky terrain is when water drops, it doesn't drop by one or two feet, it drops by 50 feet at one go because you have rocks in between. So, water starts dropping alarmingly and this is what has happened.

No rain means no recharging and ground water drops further. Therefore, existing bore wells become dysfunctional. In Marathwada, I have been to places where even if you dig 750 feet, there is no water. This is what is leading to this crisis.

What could be a long-term solution to this crisis?

Water conservation and groundwater recharging, creating water bodies and repairing the existing ones is absolutely essential. Ponds and all kinds of small lakes have to be given priority.

To this, change in the cropping pattern should be added. Crops which are suitable for the soil -- and this doesn't apply to Maharashtra alone, but to Punjab and Haryana too -- should be grown. How can you grow rice and paddy in Haryana? Haryana's land is not meant for that. You cannot do that.

Why are we doing it then?

For short-term profits. I am not saying anything new. All this is mentioned in scientific literature. The fact is we are growing crops which are simply not suited for the respective areas. 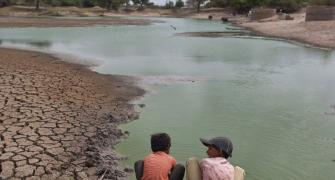 What the BCCI can learn from Jungle Book 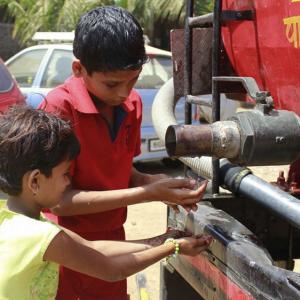