News
Business
Movies
Sports
Cricket
Get Ahead
Money Tips
Shopping
Sign in  |  Create a Rediffmail account
Rediff.com  » News » 'Vajpayee was a statesman, Modi is a doer'

'What we mean by Congress-mukt Bharat is they should be thrown out of power, and not out of the country.'
'There are many people in my party who eat beef.'
O Rajagopal, who made history by becoming the first BJP MLA in the Kerala assembly, speaks to Shobha Warrier/Rediff.com O Rajagopal, the veteran Bharatiya Janata Party leader, after fighting many elections, finally won from the Nemam constituency in the Kerala assembly election. His is the first and only seat won by the BJP.

Minister of state for defence and parliamentary affairs, urban development, law and justice and company affairs, and railways in the Atal Bihari Vajpayee government, Rajagopal, left, below, tells Shobha Warrier/Rediff.com about contesting elections at the age of 86, working with Vajpayee and two years of Narendra Modi.

The BJP won just one seat in the assembly elections and the NDA (National Democratic Alliance) has a vote share of 15%. Are you satisfied with the result?

I am not fully satisfied with the result, but I am satisfied that the BJP got a representation in the Kerala assembly in spite of the combined efforts of the two fronts -- the UDF (United Democratic Front) and the LDF (Left Democratic Front) -- of not letting the BJP to enter the assembly.

We were in second position in seven places and secured 30,000 votes in more than 30 constituencies, which is a good performance.

As far as the NDA is concerned, this is our first experience, so there is no previous figures to compare. The total impact of the NDA is that the Third Front has become a factor (in Kerala) and cannot be ignored.

Do you see a three cornered contest hereafter in Kerala?

Yes, it will be a three cornered contest hereafter unless, of course, they try to repeat what they did in West Bengal.

The UDF and LDF joined hands openly to make sure that the BJP and the NDA were defeated. Eventually, it is quite possible.

It is a reality that Kerala politics has turned to multipolar from bipolar.

A K Antony said before the elections that if the BJP wanted to enter the assembly, it had to take a visitor's pass.

I know him very well for many years and we share a good relationship. I would say it is not his personal view. It was only his master's voice.

People have given him a reply. While campaigning, he had said that people should see that we (the BJP) should not enter the assembly. So, people have replied by giving us a pass to enter.

You have contested many elections, and this is the first time that you have won. At this age, when the BJP asked you to contest, were you reluctant?

I was reluctant to contest. I told my BJP friends -- both at the state and national level and also Sangh adhikaris (Rashtriya Swayamsevak Sangh leaders) to excuse me this time.

I was ready to work and campaign for the party, but it was strenuous for me to be a candidate. I asked them to have a younger person as the candidate, but they insisted that I contest this time.

They looked at this as an important election in the 60 years of Kerala's political history. It was for the first time that a Third Front was contesting the elections.

All of them felt that when the NDA was fighting in all the seats and if a senior leader kept away, it might affect the chances of the others.

That was when I agreed and obeyed the party's directive and did whatever I could. No, we are not looking at Hindu consolidation at all.

The political situation demands that we should have a political forum in which all communities are there and will have a say. This is our considered stand.

By trying to include people from all communities, do you think the BJP will be able to shed its the communal tag?

If you look at the history of the Congress, what was the description given by the Muslim League and the Communists to the Congress and Mahatma Gandhi when they refused to divide the country on religious lines? That it was a communal party.

Today, they are giving us some names, but it is not sacrosanct. It is not the final word. It is only their propaganda.

In south India when the first unit of the Bharatiya Jana Sangh (the BJP's parent) was formed, the president was Barrister V K John.

How many Muslims are there in the CPI-M Politburo? None. Still, they think they have the right to brand us communal.

When the Muslim League is with them (the Communists, it is not communal. When it is with the Congress, it is communal. This is the opportunistic way of looking at things.

The Communists allege that the RSS started all the violence in Kannur.

This is absolute falsehood. Kannur is the stronghold of the Communists and Pinarayi and Dharmadam from where Pinarayi Vijayan (Kerala's chief minister) contested is their strongest place. Communism was born there and we have very little presence there.

Are we foolish to disturb the victory rally of their leader? It is absurd to say that our people threw a bomb at the rally.

From Kasargod to Thiruvananthapuram, in many places clashes took place and in all the clashes, on one side it was the Marxist party.

The mindset of their cadre is very aggressive. They do not allow anyone to enter the villages where they are strong.

Even before the new government took over, there were clashes and there were hartals in two places.
Are we going to see violent times in the next five years in Kerala with the RSS and the Communists fighting all the time?

I wish it is not so. That is why we took the initiative and met Pinarayi Vijayan. I told him that there should not be any violence in the state.

Unfortunately, aggression is in their DNA. It is more so with the red flag and the sickle and hammer. They are not for non-violence. They disagree with Mahatma Gandhi in truth and non-violence.

What is right for the party at the moment is truth for them.

When I travelled in Kannur during the elections, many people told me that both the Communists and the BJP/RSS are violent.

There are no ordinary people. Everybody is political.

The overwhelmingly dominant party in Kannur is the Communist party. They do not allow anybody to set up an office in the villages dominated by them.

Under the Constitution, it is the right of a citizen to start a shakha in any part of the country. We do it all over the country.

Only in Kannur, we are not allowed to do so. Violence starts when we start a shakha and you call us a violent party.

The BJP is talking about a Congress-mukt Bharat (Congress-free India). Today, the Congress is the only national party that can oppose the BJP.
In a democracy, do we not need a strong Opposition party to check the ruling party?

What we mean by Congress-mukt is they should be thrown out of power and not out of the country. It doesn't mean that they shouldn't exist.

Nobody can say that a party shouldn't function.

After the elections, the ruling party rules the entire country and not only those who voted for them. Everybody has a role in the development of the country.

That is why Narendra Modi said, 'sabke saath, sabka vikas (together with all, development for all).'

What is our prayer? Loka samasta sukhino Bhavanthu (May all beings be happy and free). Let there be happiness for everybody.

You were a minister in the Vajpayee government. When you look at the two years of the Narendra Modi government, are you satisfied with the way this government has functioned so far?

In politics, you will never be satisfied completely.

I am happy and proud of what Modi is doing.

When I went abroad, I found that people not only talk about India, but also talk about Narendra Modi too proudly.

One thing that angered many people was the interference of the State in the eating habits of the people.

It is false propaganda. There are many people in my own party who eat beef though I don't. Nobody takes objection to what our own partymen eat.

There are many sannyasins in the BJP and they are politically inclined in a particular way, but are not fully tuned politically. That is why only the spokespersons of the party should talk and nobody else.

But there was a time when we heard only the voices of those people. Why didn't the government ask them to keep quiet?

How can we ask someone to keep quiet? Everybody has the right to talk.

When Modi came to power, senior experienced people were kept out saying they were old. Shouldn't he utilise the experience and knowledge of such people?

Why do you think I wanted to keep myself away? We should allow the new generation with fresh ideas to come.

They are the ones who are in tune with the vast majority of people, their wave length is same. So they will be able to inspire the youth which the old people will not be able to do.

That is why we have the system of going for vanaprasta after you do your job.

The people of Kerala remember you for the kind of work you did for the state as the railway minister in the Vajpayee government. Are you happy with what Suresh Prabhu is doing?

He is a very efficient man with lots of ideas.

The problem is, for so many years the financial problem faced by the railways has not seriously been tackled.

No government likes to raise the railway fare because they only think of facing the next elections. But it harms the organisation.

Only if you have money can you improve the quality of service.

For many, many years, the basic development of infrastructure has been neglected. There is a huge backlog of work. Age-old bridges have to be repaired. Tracks are old and you need better tracks for high speed trains.

The problems the ministry faces is huge and any man in that position will have to face it.

For fear of losing popularity, nobody has been doing anything for years. This can't go on forever. It will harm the railways ultimately.

How do you compare Vajpayee and Modi?

Each person has his own way of doing things. You cannot compare two leaders. Vajpayee was not just a politician, he was a poet, statesman.

Narendra Modi is one person who came up fighting many injustices. So, he is a fighter all the time, and that makes all the difference.

He is a doer and a man full of ideas. 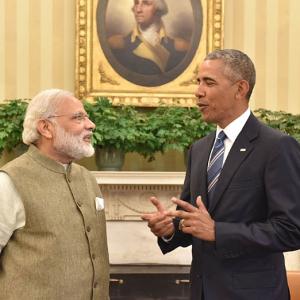