News
Business
Movies
Sports
Cricket
Get Ahead
Money Tips
Shopping
Sign in  |  Create a Rediffmail account
Rediff.com  » News » 'This is an election gimmick'

'This is how Narendra Modi-Amit Shah rule. They are now announcing that these arrested Naxalites want to kill Modi.' 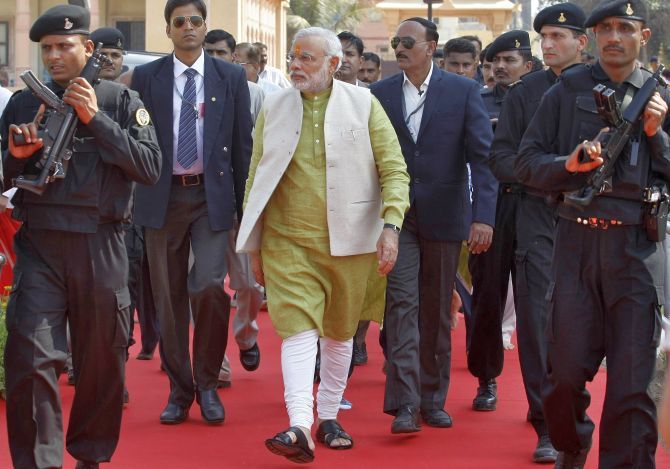 The raids were carried out following a Pune police probe into the violence that erupted after an event, the Elgar Parishad, was held at Koregaon-Bhima village near Pune on December 31 last year.

Justice B G Kolse Patil, a retired judge of the Bombay high court, is the co-founder of the Elgar Parishad that organised the December 31, 2017, event to commemorate 200 years of the Bhima-Koregaon battle in Pune.

All of a sudden these arrests were made across states, and there is talk of a plot to assassinate Prime Minister Modi. What do you have to say about it?

They just want to divert the people's attention from Manuvadis to Naxalites.

The Maharashtra Anti-Terrorist Squad was compelled to take action because of the ATS Karnakata which linked the killing of Gauri Lankesh and M M Kalburgi to Maharashtra.

The Karnataka ATS wanted these people from Maharashtra in their custody so the Maharashtra ATS has taken this action (by arresting the activists).

These Manuvadi people want to divert the attention of the Indian public to Naxalites.

(They are linking these raids to) one so-called Naxalite who was acquitted honourably by the courts (in 2014) and that too not on benefit of doubt. His name was (Sudhir) Dhawale and he was one of the workers in the Elgar Parishad.

The Elgar Parishad is organised by myself and Justice (retired) P B Sawant with a view that so-called progressive people will be attending on January 1 the Bhima-Koregaon event. Therefore, we wanted them to come a day in advance.

When they came we gave them an oath that they will not vote for the Bharatiya Janata Party. That is pinching them.

Secondly, Justice Sawant inquired into the 2002 riots and recommended Modi's prosecution. Thereafter, we have been telling the nation and especially after Rana Ayyub's book, The Gujarat Files, we are saying how they killed innocent people.

Ishrat Jahan and Sohrabuddin Sheikh were killed in Gujarat during Modi's time as chief minister.

That is old news. What is the connection between that and these arrests?

That is not old news. This is how Narendra Modi-Amit Shah rule. They are now announcing that these arrested Naxalites want to kill Modi.

There are several instances where Modi said they are coming to kill him whereas they (Ishrat Jahan and Sohrabuddin) were in custody.

Please try to understand their modus operandi -- they tell people that Naxalites are coming to kill Modi.

The Elgar Parishad has no connection with Naxalites. No funding of Naxalites.

Ambedkarites came to our January 1 function and there was no question of expenses.

There was not a single Naxalwadi in our meeting.

Dhawale, who was acquitted by the high court and sessions court honourably, and even if he may have a connection to the Naxalites, why are they connecting the Elgar Parishad to the Naxalites?

They are doing this because Justice Sawant submitted a report and I am speaking against Modi all the time.

I have been telling people that all television news is propagating that the Elgar Parishad was financed by the Naxalites.

Nobody from the Elgar Parishad is connected to the Naxalites.

Dhawale was there, but he is acquitted. So how can you connect the Elgar Parishad with the Naxalites and that too with the charge to murder Modi?

Urban Naxalites are a threat to the nation. Are they not?;

Now, brother, have you seen the activities of the Sanatan Sanstha? No action has been taken against them.

Have you seen the case of Colonel Shrikant Purohit and Sadhvi Pragya? They wanted to establish Hindu Rashtra on the basis of Manu Smriti. That was their aim.

It was recorded in court. We have a certified copy of that. Now they are released on bail.

On the other hand, people like us, who are honestly trying to oppose this regime Constitutionally, we are being made scapegoats.

But you are too insignificant a force politically. So why would the State go after people like you?

They have not taken any action against me. They are just defaming us.

They can carry out raids and they will not find anything.

Justice Sawant is a big person and he had submitted a report against Modi in 2002.

When you say all this, what does it mean for human rights in India?

There is no value for human rights in India.

About 80 per cent of Dalits, Muslims and Adivasis are undertrials. The maximum punishment for their offences will be for one or two years, but they remain in jail for 10 years or more.

What is human rights? Who cares?

You must read Rana Ayyub's book where the ATS officer says Modi-Shah have no regard for human rights.

The Naxalites plan to overthrow the Indian State by force.

Who says that? It is only the police who says this. Nothing is proved against them.

When we have tape recorded conversations of Pragya Thakur and Colonel Purohit, no action is taken against them, but imaginary Naxalites are being prosecuted.

You have to credit Devendra Fadnavis' government for taking action against extremist Hindu organisations in Maharashtra.

Modi and Fadnavis have not done this. It is the Karnataka ATS that has done it.

They wanted these Hindu extremists in their custody for the killing of Gauri Lankesh and Kalburgi, so to counter that the Maharashtra ATS has taken action.

Now that report is suppressed, but we have a copy of it.

The BJP wants to suppress the offences of Manuvadis and expose those who are rationalists.

Are you saying the Karnataka ATS and Maharashtra ATS have different agendas? What it means is that there is politicisation of the ATS forces too.

It is bound to happen. Every agency under Modi's regime is under pressure and politicised.

This happened during the Congress too, but Modi has gone a step further and pressurised them.

So what is the point of talking human rights and justice? It is a waste of time and it is only for name's sake.

You don't think there is truth in the police statement that someone is planning to kill the prime minister?

This is only an election gimmick, no one wants to kill Modi.

Ishrat Jahan was in custody and Modi said she came to kill him.

Sohrabuddin was in custody and Modi said he came to kill him.

There are the same fake encounters and same police officers.