News
Business
Movies
Sports
Cricket
Get Ahead
Money Tips
Shopping
Sign in  |  Create a Rediffmail account
Rediff.com  » News » 'There is a lot of bitterness in the Sangh Parivar'

Congress leader Sachin Pilot is trying to revive a party that was decimated in the Assembly and Lok Sabha polls in Rajasthan.

In an interview, Pilot, who was recently appointed the Pradesh Congress Committee chief, says people are disenchanted with the Vasundhara Raje government. 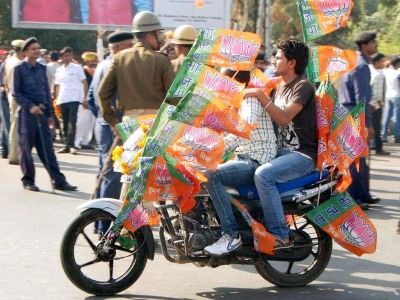 How do you rate this government's performance?

The Bharatiya Janata Party has secured a historic mandate by winning 163 out of 200 seats. It is phenomenal. But surprisingly, of the 163 MLAs, we have only 11 ministers. The chief minister hasn't been able to form a Cabinet; she is holding 47 portfolios.

If you spend half an hour on each department, you cannot do justice to all the departments in a day.

I also think the relationship between the Centre and state leadership is not a healthy one. The so-called reformative moves the government made lack consultation with stakeholders. So, there is a lot of acrimony in the Sangh Parivar.

The so-called labour reforms are opposed by the Bharatiya Mazdoor Sangh. There is acrimony and infighting within the BJP and despite the massive mandate, it has failed to deliver on the ground.

Vasundhara Raje has projected herself as a reformist.

There is a lot of talk. But the reality on the ground is different. There is over-centralisation of power. Decision-making is opaque; even BJP MLAs don't know what is going on. Most of them were not consulted about the state highways authority and the new labour Bill. It is dictatorial.

In a democracy, there should be a consultative process. In the garb of public-private partnership (PPP), you cannot abdicate the state's responsibility in terms of providing health care and education. They are shutting down 17,000 schools.

Her reason for PPP is that the Congress left the state in a mess and now she doesn't have funds for development. Under PPP, they are trying to privatise all the assets of the state. The Congress will certainly keep a keen eye on what is going on. We are not against these reforms per se, but how these are done needs to be watched. Are these being done to benefit certain people?

Who could these people be?

I do not know. Things are yet to be done.

But why were the Barmer Refinery project and Jaipur Metro project stopped?

Was it because these were governments public sector undertakings executing the work?

Now, there is a move to hand them over to some private organisation for completion. Announcements have been made about the PPPs in the state, but PPP can't be a panacea for everything.

She says she is doing all this for the purpose of inviting investment in the state. So far, there is no investment but only photo opportunities.

How important are these by-polls for the Congress, especially after the drubbing in the state Assembly, as well as the Lok Sabha, elections?

All the four (by-poll) seats were held by the BJP. Now, it is a challenge for them to retain the seats. We are putting up a very good fight. There has been no tangible change since the Vasundhara Raje-led BJP government took over.

During campaigning, they promised they will give 1,500,000 jobs and reduce inflation, but nothing of that sort has happened. In fact, the good work we did, such as pensions and free medicine, has been stopped because those schemes had a Congress stamp.

How important is the Narendra Modi factor in these by-polls?

In Maharashtra, BJP President Amit Shah had said the Modi factor was waning. Modi's election was a national election. Also, if you look at the results of the by-polls in Bihar, Punjab, Uttarakhand and Karnataka, the BJP has done badly, while the Congress and its allies have done remarkably well. We are hoping to repeat that performance.

That must be adding a lot of pressure, especially since you have recently been appointed as the state president.

There's no pressure on me. The mandate from the Congress and its central leadership is that I must rebuild the party from scratch. We were routed in the parliamentary elections; we need to start afresh and get youngsters into the party.

How are you rebuilding the party?

We have already started expanding our base with a membership drive. We are reaching out to non-governmental organisations, campuses, colleges, universities and young professionals, even in rural areas. Different social segments of our society, which have never been traditional clients of the Congress, have also been approached.

How big is the challenge, considering your party isn't doing well at the Centre and state?

I am looking after state affairs and I can tell you we have started mobilising young people and reaching out through social media. We are rebuilding the cadre of the Congress party.

Will you be replicating the BJP or the Rashtriya Swayamsevak Sangh?

They are ideologically right-wing, narrow-minded organisations, which compromise with ideals to gain power. We will ensure we are an open and dynamic platform for young people and for all age groups, to become the unifying force Rajasthan needs. One loss in the parliamentary elections cannot dictate the future of the Congress party.

This was a different kind of elections, one in which there was an undercurrent of polarisation. And, let's face it: of the 80, the BJP won 73 seats in Uttar Pradesh. It doesn't mean they deserved to win. There was sabotage and non-issues were made very important.

What mistakes do you think the Congress made that led to the rout?

There are many reasons. People were looking for change; we thought we had done fairly well with welfare programmes and schemes. But the BJP was able to sell a dream. There are dream merchants; they will sell you Ram Mandir, reservation, jobs, and so on. By and large, people listen to such things and fall for them.

How hopeful are you of winning the by-polls?

We are fighting to win. The government is misusing all the resources and the power it has. I am sure despite the abuse of money and power, the voice of the people will be heard.