News
Business
Movies
Sports
Cricket
Get Ahead
Money Tips
Shopping
Sign in  |  Create a Rediffmail account
Rediff.com  » News » 'Sometimes in politics, there is a need to take two steps back to forge ahead'

'Sometimes in politics, there is a need to take two steps back to forge ahead' After two successive debacles in the Lok Sabha polls, the issue of the PM candidate should be the last thing on the mind of the Congress which needs to focus on reviving the organisation to bounce back, suggests Congress veteran Sushilkumar Shinde.

The 79-year old former home minister's refrain is for a severe introspection in the Congress which has been in the political wilderness at the Centre since May 2014 which saw the emergence of Narendra Damodardas Modi as prime minister.

The Grand Old Party, Shinde says, needs to find out where it had faulted in the last 8-10 years and where and why it failed to succeed.

The Congress has not held any formal brainstorming session since the debacle in the 2014 Lok Sabha elections which saw its lowest ever tally of a mere 44 in the 543-strong House.

The last such session was held in 2003 in Shimla which had resulted in the party opting for the coalition route and emerge victorious in May 2004 at the head of the UPA dispensation.

In an interview with Rediff.com Contributors Sunil Gatade and Venkatesh Kesari, Sushilkumar Shinde insists that the Congress should work unitedly with leaders like Mamata Banerjee and Y S Jagan Mohan Reddy -- who were both members of the Congress party till they left to form the Trinamool Congress and YSR Congress respectively -- to take on the Modi dispensation.

At the same time, he feels that the challenge in the 2024 Parliamentary polls is "not insurmountable" if Congress workers stand united and forge coordination with like-minded parties.

Shinde, who was Leader of the Lok Sabha for some time ten years ago after Pranab Mukherjee moved to Rashtrapati Bhavan, says the "anger" of people against the Modi dispensation needs to be channelised by the Opposition.

After the unprecedented Congress debacle in two successive Parliamentary elections, how do you look at the 2024 Lok Sabha elections?

We do not have resources and we will have to give strength to the worker.

We will have to go to each and every constituency and will have to sort out differences. Then only we will be able to rise up to the challenge.

What is the situation now? Is the challenge in 2024 very difficult or impossible?

Right now, there is a lull. Looking at the situation in the country, we need to work very cautiously and systematically.

This is because the BJP dispensation has been a failure on several fronts.

They have failed on the economic front so also in handling the pandemic. We clearly see that there is no coordination.

The challenge in 2024 is not insurmountable, but we will have to work really hard.

The anger among the people against the ruling dispensation needed to be channelised to benefit the Congress.

In which states could the Congress make gains?

We could make gains in Maharashtra, Karnataka and Madhya Pradesh and if we work methodically and consistently, we could do better even in Gujarat.

But what about Uttar Pradesh and Bihar?

In these two states, it will take time (for the Congress to revive). We will get a good number of votes in Uttar Pradesh in the coming assembly polls, but won't be able to form a government there.

You say that Congress needs to work very systematically. Do you see Mamata Banerjee and Y S Jagan Mohan Reddy, who were once part of the Congress, as your natural allies?

It is time to work unitedly with all those who had left the Congress at one point or another. It is also a need for them.

How do you see the Maharashtra Vikas Aghadi experiment which has brought the Shiv Sena, NCP and the Congress together?

It is going on well right now. But there is no alternative to increasing the strength of our party by working independently.

Has the experiment helped the Congress and how far will the MVA last?

There were problems initially in the formation of the government.

But now people have realised that the BJP government at the Centre is playing a fraud and therefore there is anger among the people.

Since it is a total failure on the finance front, prices of all things are going up, petrol and diesel prices are daily being raised.

They (the Modi government) are not able to manage.

If you see the statements that are coming, the MVA will continue.

Chief Minister Uddhav Thackeray has himself sought to puncture the speculation about the bSena again going back to the BJP.

Thackeray has wondered what his party has got from the BJP in their association of 30 years. 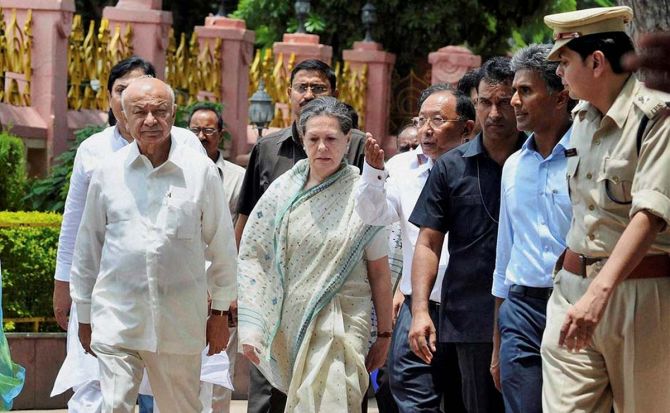 The first thing that needs to be done is to bring together the old and the young Congress worker.

There should be coordination with those who have left the party.

Good days will only come then. People have had a lot of bad experiences in the last seven years (since the advent of Modi to power) -- be it law and order, justice for Dalits, minorities and the economy.

They are just adept at propaganda without much work on the ground.

They (Congress party workers) have been largely inactive. Both the old and the new workers needed to be active.

The old should also give up their ego and work day and night for the organisation.

Sometimes in politics, there is a need to take two steps back to forge ahead.

Who should be the PM candidate of the Opposition?

One cannot say right now who should be the PM candidate.

The first thing necessary is for the Congress is to get its act together and set its house in order.

You had been the leader of the Lok Sabha during a period of the UPA-II. Now when another UPA experiment is in the pipeline, do you think there is a need for a UPA convenor from a non-Congress party to make the alliance strong and vibrant?
George Fernandes was the convenor of the NDA during the Vajpayee era even though he did not belong to the BJP.

Let me tell you that in the present circumstances as long as Sonia Gandhi is heading the UPA, all will be well.

The issue is to bring together other parties (in the fight against the BJP).

First, the alliance needed to take a concrete shape.

Let all parties be there first, then it (the UPA convenor) could be decided after consultations.

The Congress has to take the lead in bringing together non-BJP parties.

What led to the Modi upsurge since 2014?

Whatever happened has happened, They (the BJP) had resources, organisation and people.

Besides, people needed some change. But now people have realised that they (the Modi dispensation) cannot take the country forward.

See their foreign policy, now most of the neighbours are not with us. 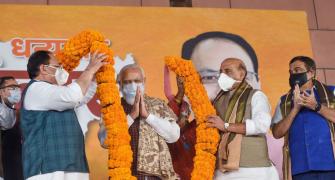 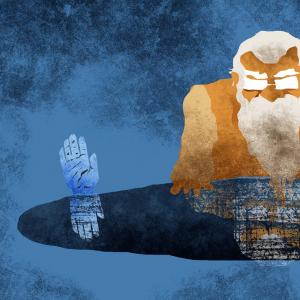 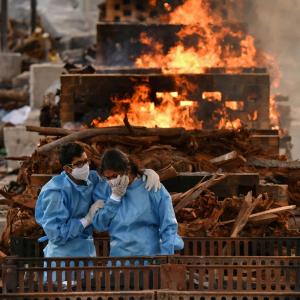