'Any soldier who takes the oath on joining the army swears allegiance to the Constitution of India.'

Army chief General Manoj Mukund Naravane's statement on Saturday, January 11, is extremely important because there has been a lot of chatter recently about the Indian Army becoming politicised.

"It is a welcome statement that the chief has said that the Constitution is supreme for the Indian Army," Lieutenant General Deepender Singh Hooda (retd) -- the former General Officer Commanding in Chief of the Indian Army's Northern Command under whom the 2016 surgical strikes were planned and executed -- tells Rediff.com's Archana Masih.

General Naravane has said the army will take appropriate action in Pakistan occupied Kashmir if ordered to do so.
As the general who planned the surgical strikes of 2016, what according to you are the challenges and difficulties if this mission was to be undertaken?

The army will do whatever the government of the day asks of it.

If the government gives them a task, then the chief has to plan for it, and that is exactly what he has said -- that if we are asked to do so, we will have to undertake the task.

Having said that, there are enormous challenges. It is not an easy task to execute.

PoK is not just territory. It has a population that may not exactly be welcoming of the Indian Army. It is for the political establishment to think through all these issues before the army can be ordered to do this.

An all-out war affects the whole nation. It has economic costs. The world over, countries use punitive and limited surgical strikes in areas of conflict.

Surgical strikes are a more suitable course of military action in PoK rather than an all-out war.

The army chief has said that the army owes its allegiance to the Constitution. Has any army chief categorically stated this recently? Why do you think he said this?

I don't exactly remember an army chief stating it so categorically, but this (allegiance to the Constitution) is at the heart of the military.

Any soldier who takes the oath on joining the army swears allegiance to the Constitution of India.

The army chief's statement is extremely important because recently there has been a lot of chatter about the army becoming politicised.

It is a welcome statement that the chief has said that the Constitution is supreme for the Indian Army.

What would it mean down the line of the chain of command in the army?

Officers and men understand that their duty is towards the State and not to any political party.

The chief is trying to reassure the senior leadership of the army and the people outside -- including the political leadership and the Opposition -- that the Army remains and will remain apolitical. Having been criticised for becoming politicised recently, do you feel this sets the tone for some course correction so that the army is not perceived to be toeing the government's line?

In recent times there has been criticism of the army and the leadership that it is getting politicised. There have been certain statements that have been made.

In the backdrop of all this criticism, it has come at an opportune time. The timing was just right for this.

The present chief has clearly laid down the standard. It is reassuring the public and politicians of all hues that the army will not take any partisan position and be clear of all controversies, so let us see how it goes.

He has clearly stated what he had to say and it will certainly have an impact.

Broadband and 2G Internet has been partially restored in J&K. What will be the challenges before the Indian Army after restrictions on the Internet and Section 144 are eased?

If restrictions are eased, the security forces will have to adopt some restrained measures to deal with any ensuing protests.

It has to be seen if the level of alienation has increased in the five months. The population will have pent up anger and will seek a release.

How the situation unfolds will depend on the handling of the situation. The use of lethal devices against the population should be avoided.

After the Burhan Wani protests, the Indian Army had launched 'Operation Calm Down' to restore normalcy and used minimum force. We had got reasonable success and such measures will go a long way.

The army chief also said that the threat of collusion between China and Pakistan is maximum in Siachen. What is this threat that he is alluding to?

Strategically, it is an area where the three borders meet. North of Siachen is the Shaksgam Valley which is with China and to the West is PoK.

How have the diplomatic and informal summits with China helped on the situation along the Line of Actual Control with China?

It helps enormously. Incidentally, I was the first to go after a very long time to China in 2015 as Northern Army commander. My personal experience is that of speaking to the senior leadership of the PLA (People's Liberation Army) and putting our view across and they doing the same, it helps tremendously.

There is a system of border personnel meeting which take place regularly along the border -- all this has helped in keeping the LAC calm as opposed to the Line of Control with Pakistan where such mechanisms are limited.

There is hostility between the two Indian and Pakistan) armies, but there is also absence of military to military dialogue.

Do you feel there is tremendous pressure on the army from outside -- from politicians and parties of all hues, to civilians to comments on social media -- compared to what it was in the past?

There is. All politicians, irrespective of party affiliations, must look at this seriously and try and keep the army out of their political debates.

The best structure of civil-military relations is that the army remains completely professional and apolitical. Politicians shouldn't interfere in the day to day routine of the military.

That would be the ideal situation.

How will the post of chief of defence staff help the armed forces?

It is a positive step. There is a lack of synergy between the three services. The CDS will at least bring some jointness.

The CDS has been given a fixed timeline of three years to make sure there is jointness in certain areas.

The CDS has specifically been asked to work towards integrated theatre commands. The mandate is very specific and is a positive step. 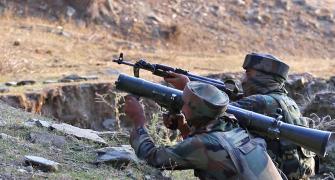