After working for 20 years in the Shiv Sena, Amar Pandurang Pawle left the party to join the Bharatiya Janata Party on the eve of the crucial Brihanmumbai Municipal Corporation polls due on February 21.

Pawle was secretary of the Sena's student wing, the Bharatiya Vidyarthi Sena, and later became a core committee member of the Yuva Brigade.

Pawale, below, tells Rediff.com's Syed Firdaus Ashraf that the Sena has lost its focus on Marathi youth and become a "corporate" party.

Why did you quit the Shiv Sena?

When Balasaheb Thackeray was alive, he used to tell us that we should do 80 per cent social work and 20 per cent political work.

Now, a statement comes from Aditya Thackeray (the Yuva Sena president) which says that we should do 100 per cent politics.

But his mobile phone is never reachable for grassroot workers, he never meets them.

When did you start getting disillusioned with the Sena?

(It started) from the time the Yuva Sena was established.

When Uddhav Thackeray took full control of the party, he started changing the party according to his personal nature.

The Shiv Sena meant instant justice and street fighting for the right cause.

Now, Uddhav Thackeray says we should only do things which can get political mileage.

We were part of the BVS and we never used to take permission from anyone.

We used to oppose Valentine's Day and now our chhote sarkar (Aditya Thackeray) says celebrate it.

He also says he wants Mumbai to be open 24x7. I ask why? For dance bars?

What stance did the BVS take earlier which it has abandoned now?

The BVS has been dismantled and now it has been made into the Yuva Sena.

Many leaders lost their posts overnight when the Yuva Sena was formed. Now, the Shiv Sena leaders have a social circle in upmarket Bandra and Altamount Road areas, and not Maharashtrian middle-class dominated Parel and Lalbaug, which is the party's base.

The Shiv Sena is slowly becoming a Page 3 party. They need (actor and model) Dino Morea with them. 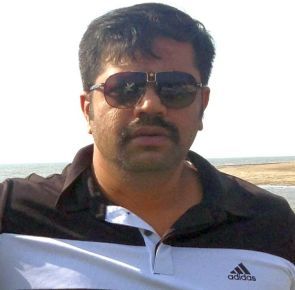 What do you mean by that?

Dino Morea runs some NGO and started a gymnasium at Marine Lines.

Why does Aditya Thackeray need to promote him?

There are many Marathi youth who do this, why not promote them?

Are you saying that Uddhav and Aditya have no connect with Marathi youth?

They only talk of Marathi youth, but they don't work for them.

What have they done for the Marathi people?

In the Bombay municipal corporation all contractors are non-Maharashtrians.

However, last week it was reported that the Sena has disbanded all unions. They want all the Sena union leaders to work under this Kurla leader.

Now, if I am working for the Shiv Sena for last 20 years, why should I work under this man?

Moreover, why are you giving the power to one man? What is the need?

Haven't you spoken to Uddhav Thackeray about this?

He is not reachable.

He only works with a coterie and they are running the Shiv Sena on Facebook and Twitter.

If you write to them there, they will meet you.

This did not happen during Balasaheb's time.

During Balasaheb's time any Shiv Sainik could meet him at his home, Matoshree. Doesn't it happen now?

If you go directly to meet Uddhav at Matoshree, he will not meet you. You will be directed to Sena Bhavan (the Shiv Sena headquarters in Dadar) and to take an appointment.

Now, if there is some poor Shiv Sainik who has come from a far off village in Maharashtra, will he be able to follow the procedure?

Earlier, Sena Bhavan used to be filled with people, but today it is deserted.

Shiv Sena leaders are close to people who cannot even speak Marathi.

If leaders have friendship with these non-Marathi people, then they should restrict it to their homes, not bring them into politics.

Where will the poor Shiv Sainik go?

I want to tell Uddhav that he only talks about Marathi people, but let him do some work for them.

Is that why muscle power has disappeared from the Shiv Sena in Mumbai?

The present leaders do not want that.

They feel coming on the roads for justice is an outdated concept.

They want to run the Shiv Sena like a corporate entity.

You will see Aditya Thackeray promoting billiards, but not local sports like kabbadi or kho kho.

If Shiv Sainiks sit in the office to tweet, then who will be scared of the Shiv Sena on the roads?

What do you think the Shiv Sena needs to do?

The party needs to go back to basics.

They should not dilute their ideology. The party must go to the grassroots.

He makes a phone call and then reaches these shakhas. He does not make surprise visits.

And who comes there? It is only those who hold some posts in the shakhas.

The workers do not go to meet him.

Uddhav does not want Shiv Sena workers because he thinks the party is doing well and he is happy with his coterie.

During Balasaheb Thackeray's time, the symbol of the Shiv Sena was a tiger.

But now that tiger has been tamed by Uddhav and made into a circus tiger which dances to the tunes of a ring master who sits at Matoshree.

IMAGE, TOP: Aditya Thackeray flanked by Hrithik Roshan, right and Dino Morea at the inauguration of a fitness centre in Mumbai. 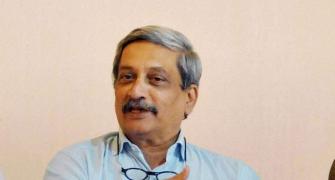