'He depended too much on assurances given by sadhus and sants. He may not be culpable, but he was wholly responsible for December 6, 1992.' After completing his tenure as environment minister and rural development minister in the Manmohan Singh government, Jairam Ramesh quickly wrote two books, Green Signals: Ecology, Growth and Democracy in India and Legislating for Justice: The Making of the 2013 Land Acquisition Law.

His latest book To The Brink and Back -- India's 1991 Story has made the most waves since it highlights the 35 days in 1991 when then prime minister P V Narasimha Rao and then finance minister Manmohan Singh ushered in momentous changes in India.

Jairam Ramesh discussed the backdrop for his book with Rashme Sehgal in this exclusive interview for Rediff.com

In your book you described yourself as a sherpa for Mr Narasimha Rao.

I was working with Narasimha Rao first when he was made Congress president and then as an aide in the Prime Minister's Office between June 3 1991 and August 31 1991. It was in that context that I said I was a sherpa.

He was very learned, very erudite, a very thoughtful individual.

Politically, he was very crafty, very astute, very cunning in a nice sense.

In the period that I saw him -- when the economic reforms were launched -- he reached out to the entire political spectrum and was able to weather the political storms that the reforms generated because of the way he managed the politics of reforms...

Reforms are as much political as they are economic.

The reforms were opposed by an entire spectrum of political parties including several Congress leaders.

When the then finance minister Manmohan Singh presented the Budget on July 24, 1991, Rao allotted three consecutive days to the Congress party where all members were given the right to speak.

Rao kept quiet. He allowed the Congress Parliamentary Party forum to express different points of view, but was able substantially to manage this dissent. That was obvious.

The entire structure of the economic policy was being transferred, but he was able to ride out the Opposition.

The need for economic reforms was something that had been on the cards for some time. The demand for reforms was felt even by Indira Gandhi who set up the Economic Administration Reforms Commission under L K Jha's chairmanship.

There was a compulsion in 1991 because the country was facing an unprecedented financial crisis.

Compulsion was an important component of his behaviour. Very soon what started as a compulsion became a matter of conviction. 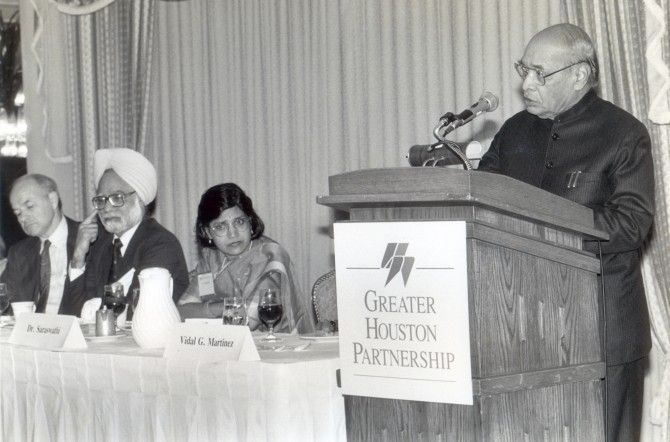 You have described the relationship between Dr Singh and Mr Rao as having been a jugalbandhi.

There was a superb jugalbandhi between the two men. Manmohan Singh was the architect of the economic reforms, but without political backing, political protection, without the political manoeuvring, the reforms would not have taken place.

Several political parties including the Left parties opposed these economic reforms. The National Front with the Janata Dal and other parties also opposed them. The BJP supported some part of the reforms and opposed some.

The response from industry was ambivalent. Organisations like FICCI and the Bombay Club expressed their unhappiness about foreign investment and the reduction of import duties.

Everyone knew the government was in a tight corner and had no other option with our short-term external debt having ballooned to alarming levels, but this did not stop the Opposition from attacking the government.

How the opposition was managed is a tribute to both Manmohan Singh and Rao. The number of times they met Opposition leaders, held debates in Parliament, gave a number of interviews and were extraordinarily active in their political outreach.

To the extent that Modi and Jaitley work as a team, their approach is markedly different and there is much they could learn from their predecessors.

In your book you have alluded to Mr Rao being a wily fox while Dr Singh is compared to being a hedgehog.

Yes, indeed Rao was the wily fox while Singh was like a hedgehog who knew only one thing.

It was a unique and unlikely combination. Both were pillars of the establishment and yet were working to unfold a paradigm shift in our economic policy.

Would you fast forward the comparison by a few years and say that Manmohan Singh remained too much a hedgehog when he was prime minister while Sonia Gandhi failed to play the role of the wily fox?

I have not thought about it. At some stage, I will write about (United Progressive Alliance) UPA1 and UPA2 and then we will see. Though I cannot deny in hindsight that if our political management had been better during UPA2, the results of the 2014 elections may have been different.

We cannot deny that Manmohan Singh's adroit handling of the economy (as prime minister) saw a 7.5 per cent growth over 10 years.

The UPA government saw 140 million lifted above the poverty line which is unprecedented. In 2004, 30 million Indians had mobile phones, but by 2014, the number had risen to 80 million.

The campaign launched by the BJP succeeded in derailing the UPA's achievements. Narendra Modi has taken all UPA initiatives and given them new names. He has simply repackaged them and launched them as his own.

While the Congress pressed for a gamut of reforms in 1991, the party is opposing several economic reforms that the BJP has been pressing for.

Modi, (Finance Minister Arun) Jaitley and (Transport Minister Nitin) Gadkari wanted to introduce amendments in the Land Acquisition Bill which were not in the interest of farmers. An eight month-long agitation has forced the government to backtrack and withdraw the amendment.

In the same way, the Congress is not convinced that the issue of privatisation of banks is in the country's interest. The nationalisations of banks has been an article of faith for the Congress.

Apart from the Indira Gandhi (the prime minister who nationalised banks in 1969) factor, we do not see why public sector banks should be privatised.

If Mr Rao was so astute, why is he such an under-rated Congress prime minister?

There are many other issues that need to be looked at in order to make an assessment of Rao.

The whole Babri Masjid episode led to Rao's alienation from the rest of the Congress.

Most people believe he did not do enough to protect the Babri Masjid. President's Rule should have been imposed in Uttar Pradesh in September 1992.

Of course, Rao has defended his position in his book, but the Babri Masjid remains the one single factor that alienated Rao from the rest of the Congress. He overestimated his own influence and the clout he had with the RSS (Rashtriya Swayamsevak Sangh).

He depended a lot on (Rajasthan BJP leader, chief minister and later vice-president) Bhairon Singh Shekhawat and depended too much on assurances given by sadhus and sants.

He may not be culpable, but he was wholly responsible for December 6, 1992.

We need to learn to do a frank appraisal of our leaders. We cannot paint our leaders as gods or villains, but on Rao's tenure it can be said that the economic reforms were a sterling achievement.

Rao changed a great deal as he went into his prime ministership.

He faced a series of setbacks and became very defensive. In April 1992, there was the Harshad Mehta scandal, followed by the JMM (Jharkhand Mukti Morcha) scandal, and then he went onto to lose two crucial assembly elections in Andhra Pradesh and Karnataka in 1994.

He had been a chief minister of Andhra Pradesh, but in the assembly elections he (the Congress party) got only 28 out of the 224 seats. It was a rout.

Why did Rao remove you as his economic aide?

I have no idea. I never asked him. I asked A N Verma, the principal secretary to Rao and he was completely clueless.

This has remained one of the mysteries of my life. It is possible that Rao did not like the way I functioned. I was open and accessible. You have to be anonymous in the PMO which I was not.

On August 31, I was present when Rao had a meeting with delegations from industry. In the evening, I was told I must do a follow-up of these meetings.

In the PMO, I saw my role as more political in nature. It is possible he did not see it like that -- one has to be anonymous.

The same criticism of being open and accessible was levelled at you by some Congress ministers when you were a minister in the UPA government.

I cannot compare my role in the PMO to when I was a minister. My being open and accessible has sometimes worked to my advantage and sometimes to my disadvantage.

But I never made an attempt to speak to Rao about this. I did speak to Manmohan Singh who was completely flummoxed.

Was Chandraswami behind your exit?

I have never spoken to him in my life. I used to see Chandraswami in Rao's house. I did hear there was an attempt to bring Pinaki Misra into the PMO, but I was not responsible for Pinaki Misra not coming in.

Chandraswami is reported to have been confident he could arrange a bailout for the country from the Sultan of Brunei.

Rao was close to Chandraswami who tried to lead him in all kinds of bizarre directions including claiming he could arrange a bailout from the Sultan of Brunei. Manmohan Singh talked him out of this, but a plane had been got ready.

It took me a year to recover, to be able to put this behind me. I never got to the root of it though I continued to talk to Rao. I would meet him once in two months and would get calls from him, but I never understood why I was removed. It was a dark mystery. Sonia Gandhi is known not to have liked Rao. When he died, his cortege was not brought into the Congress headquarters at 24, Akbar Road.

Who says Sonia did not like him? Sonia gave him pride of place at the Congress plenary session held in Bangalore in March 2001. He spent a couple of hours on the stage. By then he had retired from active politics.