News
Business
Movies
Sports
Cricket
Get Ahead
Money Tips
Shopping
Sign in  |  Create a Rediffmail account
Rediff.com  » News » 'Now that he is CM he will follow the party line'

'Whenever Yogiji said something which was against the party line, we distanced ourselves from that.'
'He will not speak his personal opinion now.' 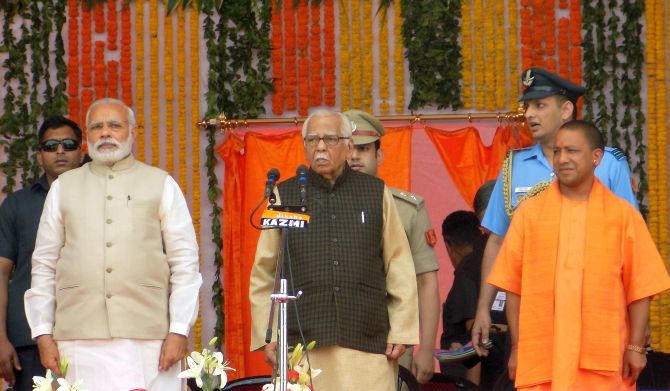 When Sudesh Verma, the Bharatiya Janata Party's national spokesperson, spoke to Rediff.com's Shobha Warrier a day after the election verdict in Uttar Pradesh, he explained that 'India's youth want a different country'.

Shobha spoke to Sudesh again after Yogi Adityanath's election as UP chief minister.

Yogi Adityanath's election came as a big shock to many people. He is someone who believes in Hindutva while Narendra Modi throughout the election campaign in UP and elsewhere spoke of vikas.

Everyone in the BJP leadership has their background in the RSS. So, it is very difficult to say one is more hardcore and the other is not.

In this era, development and vikas are the key words.

So whoever becomes chief minister would have to follow the vikas mantra and implement development. This is the promise the party made to the people of the state.

The party also made the promise sab ka saath, sab ka vikas. So, whether it is Yogiji or anybody else, or for that matter the chief ministers of other states, they would do the same thing.

During the election campaign, Narendra Modi did not speak of Hindutva. On the other hand, Yogi Adityanath is perceived as a Hindutva man. That is why people are surprised by the choice.

See, this perception is created by the media. If you look at any of the statements made by Yogi Adityanath, you will not see any statement that is anti-Muslim.

He only spoke of discrimination and how the state government was functioning, which is giving preference to one community over the other.

People may have problems with his saffron robes.

When Uma Bharti became chief minister of MP, the media did not have any problem with her though she also wore saffron.

Yogiji, I don't think, is in any way a hardliner.

When you see him perform as chief minister, you will be surprised and say we made the correct choice.

What about all those virulent hate speeches he made against Muslims?

He has been elected MP five times, from the age of 26.

Had he made any of those hate speeches, he would have been arrested.

As an MP, it is against the Constitution to make hate speeches.

I am very sure that what they are playing on TV channels is taken out of context.

Whenever Yogiji said something which was against the party line, we distanced ourselves from that.

So, he spoke against the party line! Actor Anupam Kher once said a person like Yogi Adityanath should not be in the BJP.

I don't recall what you are saying... We distanced ourselves from some of his opinions when they did not follow the party line.

Now that he is the party chief minister, he will follow the party line.

He will not speak his personal opinion now.

So you believe now that he is a Constitutional head, he will speak with utmost care and discipline?

I would put it this way. The mandate is for Narendra Modiji's vision of development.

We have come with an agenda for the transformation of Uttar Pradesh from one of the most backward states to where it should be.

India cannot develop without UP developing.

Yogiji has been given the responsibility of developing the state.

After he was chosen, he himself said it would be sab ka saath, sab ka vikas.

The criticism is that the vikas mantra was just a mask behind the Hindutva card.

This is too Westernised a thinking.

You need not wear pants to be a development man; you can wear a saffron robe and be an icon of development.

There is no contradiction between Hindutva and development.

Hindutva is never against development.

Actually even when you say Hindutva, we are talking about a more inclusive society.

I think there is a perception gap and I am sure once Yogiji starts working, it will change.

When I asked you last week about the Ram temple issue, you said it was for the courts to decide.
Now we hear the Ayodhya MLA talking about building a Ram temple.
With such a huge mandate, are we going to witness communal tension in UP?

Not at all. There will not be any communal tension in UP.

There will only be peace and harmony because all sections of society have voted for the BJP.

This kind of a mandate is not possible if only one section of society votes for you.

We are very clear about the Ram temple; it will be either by a court order or by consensus between two communities.

It was reported that Manoj Sinha was Modi's choice for CM, but the RSS wanted Yogi Adityanath. Does that mean the RSS has the dominant role in the choice?

I don't think so. Those was media speculation and after such speculation, they put the blame on our organisation.

Of course, the RSS is the parent organisation, but the decision of who the chief minister will be is taken by the party in consultation with the prime minister because the mandate was for his vision on development.

So, the party felt Yogi Adityanath to be the right man to implement the vision?

If you know Yogiji's qualities, you will understand why he was chosen.

He is just 44 and is an energetic person. He can work several hours a day.

We need someone like him because we have to deliver very quickly the promises we made.

We need a strong, honest, leader who can roll out the Centre's development schemes.

Yogiji is a clean, honest, politician; there is not a single corruption charge against him.

We need a person like him to deliver our programmes and he will do it. 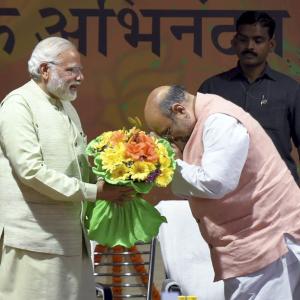