'There are fossils to indicate that there has been a gradual evolution of various body parts leading to very complex organisms like vertebrates, apes and humans.' 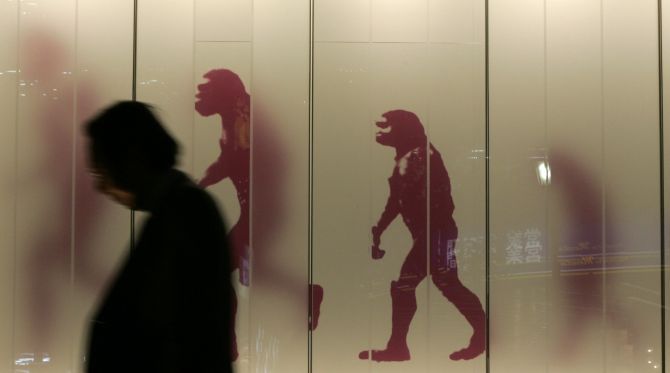 IMAGE: A man walks past a sign showing the evolution of human beings in a business district in downtown Tokyo. Photograph: Michael Caronna/Reuters

Minister of State of Human Resource and Development Satyapal Singh's remark last week that Charles Darwin's theory of evolution is 'scientifically wrong' has created an uproar among India's scientific community.

'Darwin's theory is scientifically wrong,' Singh -- a former Indian Police Service officer -- had said. 'It needs to change in school and college curriculum. Since man was seen on Earth he has always been a man. Nobody, including our ancestors, in written or oral, have said they saw an ape turning into a man.'

In response to Singh's comment, nearly 2,000 scientists across the country issued a statement that if we do away with Darwin's theory in school textbooks, Indian students will study wrong science.

Dr Surendra Ghaskadbi, emeritus scientist and a development biologist at the Agharkar Research Institute, Pune, was one of the scientists who signed the letter.

"I don't think any scientist has claimed we came from monkeys. That is not true," Dr Ghaskadbi, below, tells Rediff.com's Syed Firdaus Ashraf.

When you came across the HRD minister's statement that Darwin's theory should not be taught in schools, what was your reaction?

It is a 150-year-old theory. Every word of it cannot be proven right. Many people have been working on it.

Evolution of various species from a simple organism is a well known fact.

I work on an organism called hydra, which is believed to have evolved 600 million years ago.

What it means is that the 'genetic toolkit', as some people prefer to call it, evolved long ago.

The same 'genetic toolkit' is present in various organisms albeit with variations. Therefore, we have so much biodiversity in nature.

But the basic toolkit evolved long ago.

So it is not surprising that we have evolved from simple organisms.

That is what Darwin's theory predicted and a lot of evidence has been gathered to prove that point. 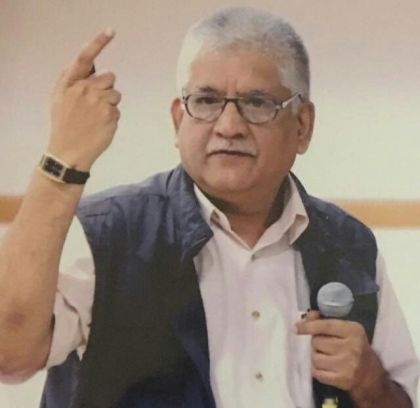 If, as the minister wants, children are not taught Darwin's theory in schools, what will they miss out on?

They will not understand an important aspect of scientific theory which has a lot of evidence in the form of fossils, for example.

There are fossils to indicate that there has been a gradual evolution of various body parts leading to very complex organisms like vertebrates, apes and humans.

We will go on finding more and more fossils and there will be a link (in the future). But even these links cannot be continuous because fossils will not always remain.

Fossils are created because of certain environmental changes at that point of time.

However, in recent years, we have looked at DNA sequences. We all contain genes and genes are made up of DNA.

These four nucleotides make up the DNA. And you can compare the DNA sequences of various organisms like plants, viruses, bacteria, humans and others.

Those sequences show us that we have a lot of similarity with other animals.

So there is strong evidence to show that we have evolved from common ancestors.

But that's what the minister is questioning, asking what is the proof that we have evolved from apes...

(Interrupts) I don't think any scientist has claimed we came from monkeys. That is not true.

What is claimed is that we have a common ancestor.

There is a lot of difference between the two statements.

You do not see monkeys turning into human beings or any other animal overnight, or in one lifetime.

Evolution is an extremely slow process. It takes millions and millions of years for an organism to evolve.

For example, just because trees have become shorter, you will not see small-neck giraffes overnight. That does not happen.

Could as part of evolution will our nails go one day since there's not much use for them? Is that what you mean?

No. That will not happen, as nails are necessary for protection.

It is generally believed for (vestigial) organs like the appendix which have no function.

Such (vestigial) organs will disappear at some point of time, but none of us will be there to witness it as it will take millions of years.

We have that in hand as we have advanced technique for DNA sequencing.

Those are used for paternity (law)suits.

DNA sequences tell us there are lot of similarities between different species, including humans.

There are scientists who doubt Darwin's theory too.

There are people (who doubt it) as it is a theory, after all. It is not something which has been fully accepted.

Science changes every day depending on evidence.

When people say something against (Darwin's theory) and oppose it, then they have to give some evidence to the contrary.

Is there strong evidence against Darwin's theory?

I am not aware of that. What I am aware of is evidence to support Darwin's theory.

As I said earlier, it is only a theory, some parts of which have been strongly proved, while others need to be proved.

Science is an ongoing process and I cannot say that what I say today will hold true in the future.

That is why (school) textbooks are revised periodically.

Many scriptures also discuss creation etc, and posit their own theory.

I am not aware of that, so I won't be able to comment.

But all religions have a different take on the existence of life on earth.

As a scientist, I practise science and believe only what is based on empirical evidence and supported by statistical analysis.

Do you believe that we can do away with Darwin's theory in school syllabi? What will happen if we do that?

Science is about teaching all theories.

In science, you tell students what knowledge is available. And let them decide for themselves.

If s/he has a doubt, then that person can find out the answers themselves.

I tell students to question even me, or the textbooks (if they have a doubt).

In science, as one of our teachers used to say, you cannot trust even your mother's (judgement) because in the laboratory you can get different results.

You have to give everybody a chance to know what kind of evidence is available for or against Darwin's theory, if at all.

I cannot make an opinion on the basis of what I feel. It will be wrong for a scientist to do so. 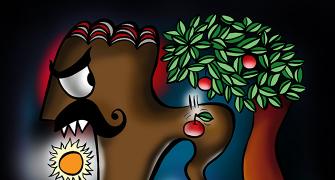 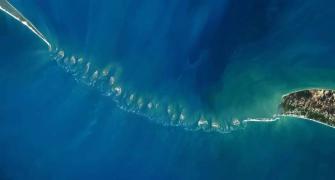