'Why is the RSS trying to destroy the indigenous culture of Assam and its language?'
'If these migrants settle in Assam, they will overwhelm the 47 per cent of people who speak Assamese.' 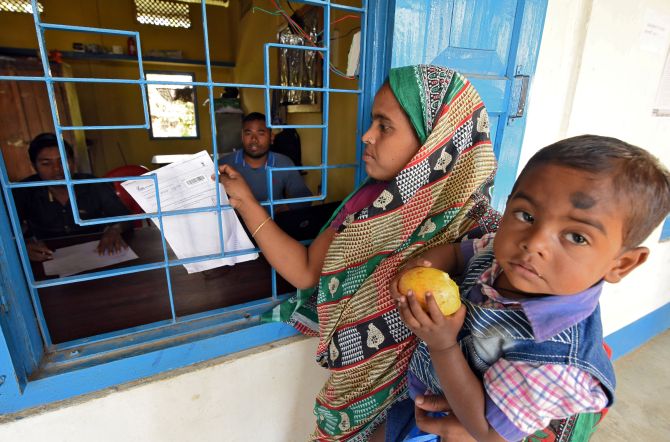 IMAGE: A woman arrives to check her name on the draft list of the National Register of Citizens at an NRC centre in Chandamari village, Goalpara district, Assam. Photograph: Anuwar Hazarika/Reuters

The Narendra D Modi government introduced the Citizenship Amendment Bill in the Lok Sabha on July 15, 2016.

Opposition to this bill, which seeks to set the cut-off date for defining illegal immigrants into India to December 31, 2014, and amend the Citizenship Act, 1955, and provide citizenship to Hindus, Sikhs, Jains, Parsis or Christians from Bangladesh, Pakistan and Afghanistan, has been on the rise ever since a Joint Parliamentary Committee -- headed by Bharatiya Janata Party MP Rajendra Agarwal -- visited Assam, where the BJP-led National Democratic Alliance is in power, in May.

The JPC is tasked with holding meetings with stakeholders from the north east states that are likely to be affected by the passage of the Citizenship Amendment Bill.

The BJP, during its 2014 Lok Sabha campaign, had promised to amend the Act to make way for legalising minorities from neighbouring countries into India.

Former Assam chief minister Prafulla Kumar Mahanta was one of the signatories of the Assam Accord signed by the Rajiv Gandhi government in 1985, which settled the cut-off date for the deportation of illegal immigrants to Assam to March 24, 1971.

If the Citizenship Amendment Bill, 2016 becomes an Act, "A lot of people will come and settle in Assam from Bangladesh and it will also make those who have already migrated after March 24, 1971 citizens of India," Mahanta, whose party the Asom Gana Parishad is a member of the NDA, tells Rediff.com's Prasanna D Zore.

What is your main opposition to the Citizenship Amendment Bill, 2016?

The main issue is that this Act has been amended at different times for Assam; not for the whole of India, not for other parts of India, but only for Assam.

According to the Assam Accord of 1985, people who have entered Assam after March 24, 1971 should be deported. The same deadline for other parts of India is July 19, 1948 for according Indian citizenship.

But this Citizenship Amendment Bill, 2016, which was introduced on the floor of the (Lower) House (the Lok Sabha), has pushed the cut-off date to December 31, 2014.

This will hurt the spirit of the Assam Accord.

We have already absorbed refugees who entered Assam after 1965.

The people of Assam paid money for them and their rehabilitation and not people from other parts of the country.

In 1971, before and during the India-Pakistan war, refugees came (from Bangladesh, formerly East Pakistan), but our people again gave them food and shelter and also paid the 'refugee tax'.

Again an amendment Bill was tried to be introduced by the Congress, but because of the opposition of two of our MPs it was not introduced on the floor of the Rajya Sabha.

A lot of students unions met the (leader of the) present government (Prime Minister Narendra D Modi) before the (Lok Sabha) election (in 2014) and demanded that after they (the BJP) form a government, they should deport all those who entered Assam after March 24, 1971, as per the Assam Accord of 1985.

But instead of that, the government has decided to give them citizenship.

This Bill, if passed, will not only hurt the sentiments of the indigenous people (of Assam), it will also hurt the spirit of the Assam Accord.

We appeal to all the stakeholders not to push the cut-off date for deportation for all those who migrated into Assam to December 31, 2014, which the Citizenship Amendment Bill, 2016 is trying to force on the people of Assam.

Why do you think the Modi government is pushing for the amendment of this Bill?
What is wrong with the cut-off date being March 24, 1971 as set by the Assam Accord?

They are playing vote bank politics by creating a sentiment among the migrants to win their political support.

But I don't think it will help the BJP gain political strength in Assam or India's north east that they are trying now.

The Modi government is playing vote bank politics by trying to introduce the Citizenship Amendment Bill, 2016.

You have said that if the Bill is passed, it will dismantle the Assam Accord.
What will be the consequences? What will happen if this Bill becomes an Act?

A lot of people will come and settle in Assam from Bangladesh and it will also make those who have already migrated after March 24, 1971 citizens of India.

Different minorities from Bangladesh like the Hindus, Rakhines and Buddhists don't want to come to India.

They have also expressed their ignorance about the Bill. Then why is this necessary?

Bangladesh was liberated with the help of India. India's government should take up the issue with Bangladesh about the security of these minorities in their country as we have given them security here which is guaranteed by our Constitution.

Will the passage of this Bill lead to law and order problems in the north east?

What are your plans to ensure that the Bill is not passed in Parliament?

India is a democratic country and we will use all the democratic means to oppose this Bill and try to convince those wanting to pass this Bill about the problems that the indigenous people of the state will face.

Since we (the AGP) don't have any member of Parliament, we won't be able to oppose it on the floor of the House.

But we will agitate against the Bill in the state in a democratic manner by staging protests, creating awareness about the problems this Bill will create by organising meetings, writing letters etc.

We are trying to enlist the support of other political parties and their leaders in the state and convince them to oppose it too and make the Union government see the ground realities.

The state governments of Meghalaya and Nagaland (where the BJP is in alliance with local political parties) have already demonstrated their opposition to this Bill.

How are you trying to convince Chief Minister Sarbanada Sonowal? Your party has three ministers in the state government.

We are using all democratic means to persuade them to ask the central government not to pass this Bill.

Many times before the Citizenship Act was amended, why didn't the BJP protest to amend it the way they are doing now?

Why didn't they think about these minorities at that time?

Now, why are they passing this Bill that will harm the rights of the indigenous people of Assam?

This Bill is discriminatory to the rights of the indigenous people of Assam.

In the same way, the Citizenship Amendment Bill, 2016, is also discriminatory to Muslims.

India is a secular country, then how can this Bill discriminate on the basis of religion?

What issues did you bring up in your letters to the PM and the President?

We have appealed to them not to let this Bill pass on the floor of the House.

Every time such agitations start, it is painted to be anti-Bengali.

The people who came to Assam from Bangladesh may have been of different religions, but they speak the same language.

When Shyama Prasad Mookherji, the founder of the Jan Sangh (from which the BJP was born), visited the north east in 1951, he said since India was reorganised on the basis of language, every Indian citizen must learn the language of the state to which they belong to and must pick up local culture too.

Then why is the RSS (Rashtriya Swayamsewak Sangh) trying to destroy the indigenous culture of Assam and its language?

If these migrants (from Bangladesh, Afghanistan, etc) are going to settle in Assam, they will further overwhelm the 47 per cent of people in the state who speak Assamese.

If they come here and continue to speak their own language, then Assamese speaking-people will be reduced to a minority.

That is also a big fear for the people of the state.

Did you meet Sonowal to seek his stand on this issue?

He has not clarified his position until now. Three ministers of the AGP met him and suggested him to be with the people of Assam.

Will your ministers resign from the government if this Bill is passed in Parliament?

It is for the BJP to decide. If the BJP passes the Bill, then they will face the (political) consequences in the state.

Will you break your alliance with the BJP?

If they pass the Bill on the floor of the House.

If they pass the Bill, then the AGP will break its alliance with the BJP?