'The cadres who die for the party are from the backward and scheduled caste communities while the leaders and those who enjoy power are from the forward community.'
'When this is the reality, who will stay with them?' 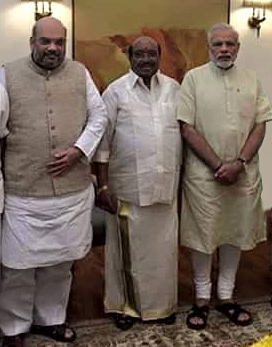 Vellapally Natesan was the first leader in Kerala to reach out to the Bharatiya Janata Party.

With the backing of Natesan, general secretary of the Sree Narayana Dharma Paripalana Yogam -- that represents a section of the Ezhava community who comprise 20 per cent of Kerala's Hindus -- the BJP became an acceptable ally in the state.

During the Kerala assembly election, the Bharath Dharma Jana Sena -- a political party Natesan founded -- struck an alliance with the BJP and fought the polls as part of the National Democratic Alliance.

The BJP opened its account for the first time in the Kerala assembly and its vote share increased to 15 per cent.

In the months that followed, differences started cropping up between Natesan and the BJP.

To pacify him, the BJP appointed Natesan's son Thushar as NDA convenor, but that doesn't seem to have appeased the SNDP chief.

In the run-up to the Lok Sabha by-election in Malappuram, Natesan once again expressed his displeasure at the state BJP.

Newspaper reports said he had threatened to quit the NDA which he denies in this interview with Rediff.com's Shobha Warrier.

Two days ago, you said that because the BJP did not show any political decency, you had decided to leave the NDA.
What exactly did the BJP do now to make you take such a decision?

I didn't say that we would leave the NDA. You have to understand that the BDJS is a political party while the SNDP is a social organisation.

I have a responsibility towards the SNDP also.

Why I said that the BJP did not show any political decency was when more than 175 political posts were filled, not a single post was given to the backward community.

I remember you telling me last year that you were displeased with the BJP for not keeping the promises they had made before the elections.
You mean, the BJP did not adhere to its promises?

At that time, I was complaining about them not keeping its promises.

Now what they did was they gave all the posts to the forward community -- the savarnas.

What you have to understand is while the negotiations were going on before the assembly elections, the BJP made many offers to the BDJS.

At one SNDP meeting, many BDJS members asked me, what happened to the offers the BJP had made?

All these people had worked hard for the NDA, but none of the promises were kept.

They had put in a lot of hard work expecting something in return. Naturally, they were upset.

Should they not be rewarding those who toiled hard for achieving this?

All those in the BJP went away with what they wanted, leaving our members in the lurch.

Though there are many allies in the NDA which represent the backward communities, nothing was given to us.

Every single post was given to the forward community, completely ignoring us.

You feel the BJP in Kerala is following a savarna attitude?

When the party ignores the backward communities completely, how can you say that their attitude is not savarna?

The BJP vote share rose from 5% to 15% in Kerala only because of the support given by the BDJS, but they now act as if they earned it on their own.

Alone, the BJP in Kerala has absolutely no support from the people; the party is a big zero here.

After the elections, when you give away political posts, are they not bound to give something to their alliance partners also?

That's why I said they didn't show any political decency.

You spoke about this openly at the NDA's Kozhikode convention in front of Amit Shah and Narendra Modi. They had promised to keep the promises they made...

Nothing happened although they made the promises.

The prime minister gave his word that the central university (in Kozhikode) would be named after Gurudev (Sree Narayana Guru). Even that has not been done even today.

Who do you blame for all this: Amit Shah and Narendra Modi or local BJP leaders?

I blame the local leaders here; they are playing foul in all this.

Otherwise, how would they grab all the political seats for themselves?

If they understood the meaning of alliance dharma, they would not have behaved like this.

They have no maturity to take the alliance partners with them.

They have so many groups here in Kerala and they are fighting among themselves all the time.

They fight for the seats they are sure to lose.

When they fight among themselves, how can they think of alliance partners?

I would say the working of the local BJP is an utter failure.

Did you tell Amit Shah that if the local BJP leaders behaved this way, there would not be an NDA here?

Why should I go to Delhi and tell them all this?

If they want, let them find out and rectify the problems. 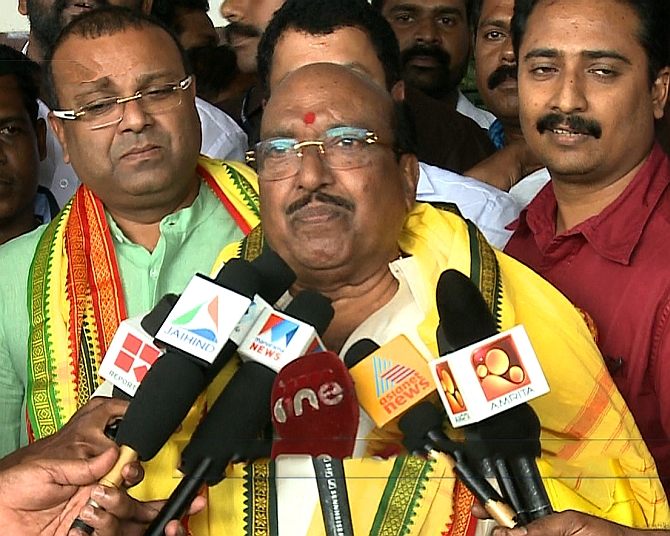 You had said that after the elections, the BDJS was treated like an untouchable. Do you still feel that way?

Yes, I still feel the same. The local BJP has a savarna attitude.

The results of their actions show untouchability.

It is quite evident in the political postings.

In fact, those who were against us started ridiculing us for joining hands with the BJP asking, what did you get in return?

Why does everyone work in politics? To share power.

If power is not shared with members, the relationship sours.

Do you feel the BJP has become arrogant after the mandate the party got in UP?

Definitely. It's the victory of the central BJP, but the local leaders act arrogant as if the victory is theirs.

On the other hand, they have not done or achieved anything in Kerala that is worth feeling proud or arrogant about.

They can only bask in the reflected glory of Narendra Modi's achievements as they haven't been able to do anything in Kerala that is worth talking about.

You said the other day that the BJP would suffer a huge defeat in the Malappuram by-election...

Yes, they will suffer badly.

Who is contesting there? (Indian Union Muslim League leader P K) Kunjalikutty who is more popular than E Ahamed (the IUML MP whose death on February 1 caused the by-election).

He will get the votes of not just the Muslims, but from others too.

The party that is going to suffer badly is the BJP. I don't think it will get the number of votes it got in the assembly elections.

It is said Amit Shah's next target after the UP elections is the south.
Do you think the BJP can have a foothold in Kerala?

It will be very difficult. Both Amit Shah and Narendra Modi have a very good image nationally, but strong local leaders are also necessary for a party to grow.

Local BJP leaders only know to act arrogant because of the success and acceptance Amit Shah and Narendra Modi have.

They have not been able to get public acceptance here yet and that is because their lenience is only towards the forward community which form only 14% to 15%.

They have no strong leadership here; the local leaders have no vision.

If you look at the BJP leaders in the districts, you will see that out of the 15 districts, 13 have leaders from the forward community.

The cadres who die for the party are from the backward and scheduled caste communities while the leaders and those who enjoy power are from the forward community.

When this is the reality, who will stay with them?

The BJP has no power here in Kerala to create a political space.

They make noise because some poor fellows from the backward community lose their lives in the fight between the RSS and the Marxists.

It was reported that you were moving towards the LDF (Left Democratic Front)...

You cannot predict anything in politics.

It all depends on the decisions taken by the leaders.

What kind of political equations will emerge during the next elections, nobody can predict right now.

Nothing is permanent in politics; today's enemy can be your friend tomorrow.

So, you will not leave the NDA now?

I never said that I would leave NDA now.

What I said was that the BJP's attitude was not acceptable.

There was not even an NDA committee in Kerala till then (the NDA meeting in Kozhikode).

After the elections, everybody went their way. There was no cooperation among the members.

Anyway, after we protested, a committee has been formed, not only at the state level, but at the district level too.

Anyway, together we were able to send one MLA (the BJP's O Rajagopal) when some people said that we had to take a visitor's pass to enter the assembly.

The NDA's future depends on how the BJP behaves.

You have to wait and see what happens next.

But I can say one thing: Unless the BJP's central leadership intervenes, the NDA in Kerala will collapse; it will have no future in this state.

More INTERESTING features in the RELATED LINKS below... 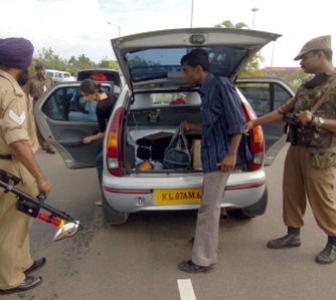 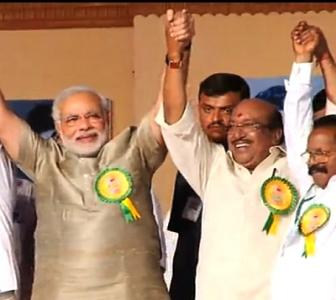 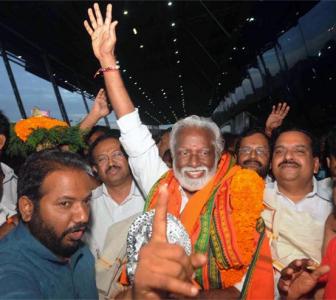 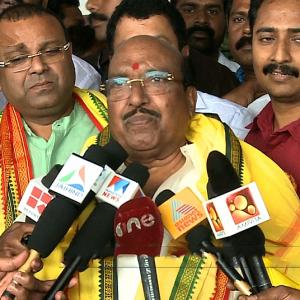