News
Business
Movies
Sports
Cricket
Get Ahead
Money Tips
Shopping
Sign in  |  Create a Rediffmail account
Rediff.com  » News » 'Muslims must not fear to live in India'

'Muslims must show patience and endurance.'
'The perception that has been created against them needs to be changed by them.' 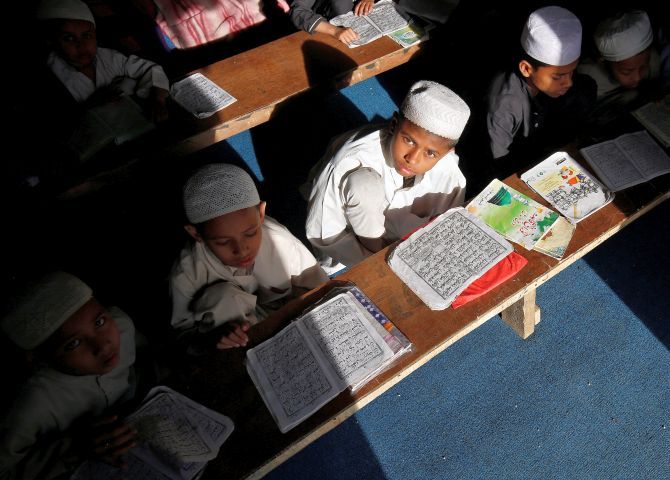 IMAGE: The Modi government is working on a major outreach to the minorities in the country through a slew of programmes, including building of educational infrastructure, encouragement to girls education and expanding the scholarship scheme. Photograph: Mukesh Gupta/Reuters

In an attempt to deliver on the prime minister's 'Sabka Vishwas' promise, the Centre has announced that it will provide scholarships to 50 million students from the minority communities, including 50 per cent girls over the next five years.

Making the announcement on Wednesday, June 13, Union Minister for Minority Affairs Mukhtar Abbas Naqvi said madrasas across the country will be connected to mainstream education.

The two measures, Naqvi said, were part of the Narendra Damodardas Modi government's 3 Es for the minorities -- Education, Employment and Empowerment.

So how does the Muslim community view this move by the Modi government whose party members and ministers keep ranting against Muslims on social media or in media interviews?

"Trust-building between Muslims and the Modi government has to be seen on the ground. We will come to know the reality only after the schemes are functioning on the ground," Maulana Mehmood Madani, general secretary, Jamiat Ulema-e-Hind, a leading organisations of Islamic scholars belonging to the Deobandi school of thought, tells Syed Firdaus Ashraf/Rediff.com.

How do you view the move to give scholarships to minority children?

The details are not out yet, so I don't know much about it as it is only an announcement. But if you look at the whole picture, then one must not criticise the move and appreciate it because the government is doing the right thing.

So, we must appreciate it and I want to give conditional appreciation. I am waiting to see affirmative action that needs to be taken on the ground.

What improvements can be done with the scholarships for students studying in madrasas?

Madrasas are a totally different issue and a different subject.

This is only related to scholarships for Muslim students and this really needs to be appreciated.

If this scholarship scheme is a success, then it will be a big achievement for the Modi government.

How will the situation change on the ground? Will it make things better for the Muslim community?

There are many scholarships programmes which have been going on since the time of Dr Manmohan Singh government. However, this announcement by the Modi government is that they are trying to make this scheme as something special.

Right now, I have heard that the Cabinet has taken a decision that there will be coaching for Muslim students to sit for competitive exams like the civil services. This also needs to be welcomed.

After being elected for a second time, Prime Minister Modi spoke about 'Sabka Vishwas'. Do you think Muslims have started trusting him?

Whatever he has announced, we have welcomed it. We wrote a letter to him and he responded to that letter. However, the important thing to note is about the trust deficit (between Muslims and the Modi government).

Trust-building between Muslims and the Modi government has to be seen on the ground. We will come to know the reality only after the schemes are functioning on the ground.

The trouble is that Prime Minister Modi says something and his party members say something else about Muslims.

Therefore, at this moment, there is a little doubt in my mind whether Prime Minister Modi's programmes for Muslims will succeed on the ground.

Aren't those who rant against Muslims fringe elements, as many Bharatiya Janata Party supporters claim?

How can you call them fringe elements? They are Cabinet ministers in the Modi government.

And this particular Cabinet minister has been ranting comments non-stop. It is going on and on.

Prime Minister Modi must stop that. If he succeeds, then things will start working out (between Muslims and the Modi government).

This time, Ananthkumar Hegde, who used to rant against Muslims, is not a minister.

But Hegde is not alone. There is Giriraj Singh (animal husbandry, dairy and fisheries minister), and there are others too.

Many say Indian Muslims are in a state of fear after the Modi government returned to power. Is this true?

It is possible. I cannot deny 100 per cent that Muslims are not living in fear or have a inferiority complex after the Modi government has come back to power in 2019.

I am saying this after hearing (anti-Muslim comments) BJP party members's statements.

At the same time, I want to say Muslims must not fear to live in India.

On what basis are you saying so?

I am saying because Indians are by nature secular people.

Some incidents (of violence against Muslims) here and there happen and Indians must not feel hopelessness.

It is not right to feel a sense of hopelessness against the entire Indian system.

You mean to say Indian Muslims will get justice if there is some wrong done to them.

Let us not get into details.

(Interrupts) Muslims must show patience and endurance. The perception that has been created against them needs to be changed by them.

At the same time, they must concentrate on the education of children.

Muslim children must set the agenda for the next 20 years and that is education, education and only education. 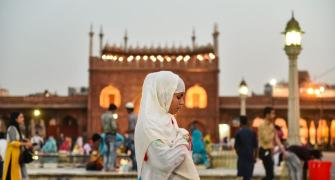 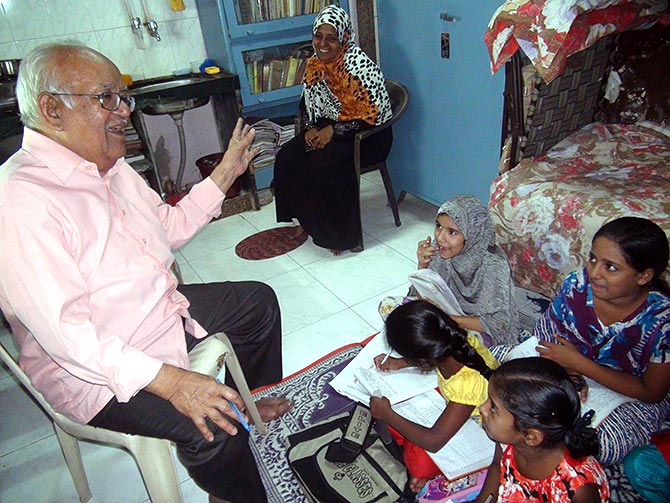