'Farmers were emulating the science Modi taught us'

Rakesh Tikait, leader of the Bhartiya Kisan Union -- an important constituent of the Sanyukt Kisan Morcha, an umbrella banner representing more than 40 farmers' organisations agitating against the three farm laws enacted by the Narendra Damodardas Modi government -- received a call on Saturday, December 26.

The caller reportedly threatened to kill him.

Tikait tells Prasanna D Zore/Rediff.com about the conversation he had with an alleged assassin.

What did the caller threaten you with?

He had called me on my number. He spoke directly to me. The call was from Bihar, as the police informed me. The caller asked me how many weapons shall he send to me.

I told him I don't need any weapons to fight against the government for our demands. Peaceful agitation is our biggest weapon, I told him.

I asked him who he was and why was he talking to me about arms.

He told me we have made a plan to kill you. I will kill you.

Though the call was from Bihar, the caller spoke in shudh Hindi.

You have been agitating for more than a month now, but the government is not willing to concede on either the repeal of the three farm laws or a law that guarantees MSP. Where is the farmers' agitation heading?

Let's see what happens going ahead. We are meeting the government again tomorrow (Tuesday, December 29). The government wanted to meet us again.

To discuss what and who will be attending this meeting from the government's side?

We have always been categorical and consistent with our demands. Unless these demands are met the farmers are not backtracking.

We will be 40 members of various farmers' unions that make up the Sanyukt Kisan Morcha. All our top leaders from the SKM will be there. Let the government decide who it wants to send to meet us. Hopefully, we will meet at Vigyan Bhavan, where all the previous meetings took place.

What proposals will be discussed at tomorrow's meeting?

Let the government rollback the three black laws; let them make a law that guarantees MSP and let them implement the recommendations of the (M S) Swaminathan Commission in letter and spirit.

Our demands have not changed a bit.

But the government seems unwilling to accept any of these demands. What will tomorrow's meeting achieve? Do you think the government will concede your demands?

Who knows? Whatever happens, the farmer is not going back. The government will have to rollback (the three farm laws).

What purpose did farmers banging thalis during Prime Minister Modi's Mann Ki Baat on December 27 achieve? What message were you sending to the government by banging thalis?

It was Modiji who told the nation to bang thalis because he said by doing so we can get the nation rid of COVID-19.

The farmers were emulating the science that the prime minister taught us. Kisan toh vaigyanik hai na poore (Farmers are absolutely scientific in their approach).

What if tomorrow's talks fail or prove to be inconclusive?

We will be blocking the Kundli-Manesar-Palwal Expressway and stop all vehicles going towards Delhi.

The Singhu and Tikri border are already sealed by farmers and the next blockade will cut off Delhi completely.

We have also exhorted the farmers to add a 'plus' sign, meaning, we have asked them to be prepared for another 34 days' agitation, now that we have already completed as many days.

Come to Ghazipur where I am and see how peacefully the farmers in Uttar Pradesh are protesting against the three black laws and you will get an idea of what will happen if the talks fail tomorrow. Let farm laws be implemented, will amend if..: Rajnath 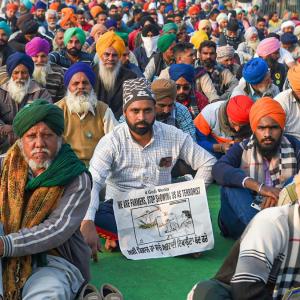 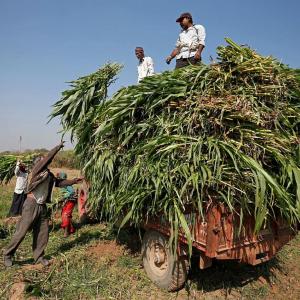