News
Business
Movies
Sports
Cricket
Get Ahead
Money Tips
Shopping
Sign in  |  Create a Rediffmail account
Rediff.com  » News » Mission 272+: How the BJP used the Internet to power its campaign

Mission 272+: How the BJP used the Internet to power its campaign 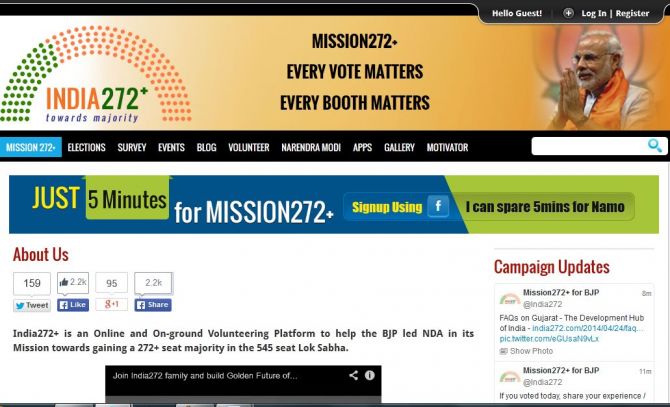 'You will be surprised at how wide the Mission272+ Internet campaign has been in terms of its reach across India. We have volunteers in all of 543 Lok Sabha seats. Every one of them signed up to volunteer through the Internet.'

'We are laser focused on Mission272+. All of our volunteers are working at the constituency level to make a difference so every vote and every booth counts.'

Shashi Shekhar, who is spearheading the BJP's Internet-Social Media campaign, explains how it is done.

Mission272+ is a campaign that defines the Bharatiya Janata Party/National Democratic Alliance campaign for the 2014 election.

Shashi Shekhar, who is well-known by his Twitter handle 'Offstumped' has actively been involved in this campaign. Chief Digital Officer at Niti Digital, Shekhar is a well-known blogger and political commentator. In this interview with Vicky Nanjappa/Rediff.com he explains in detail the concept of Mission272+ and what makes Narendra Modi different from the rest.

Could you explain Mission-272 and how it has been working?

Mission272+ is a call given by Modi defining the goal for the NDA's campaign for the 2014 Lok Sabha elections. Given how India has suffered in the past due to fractured mandates and weak coalition governments, Modi has defined this goal to motivate BJP workers, volunteers and sympathisers to work together with a clear sense of purpose.

India272+ is the volunteering platform for Mission272+. Through India272+ we have created a structured mechanism by which all those who want to contribute can get involved in the campaign both online and on the ground.

India272+ is today engaging volunteers through the Web site, an Android app and a suite of Facebook apps. Using India272+ our volunteers are able to connect with BJP leaders, provide inputs to speeches, organise local activities and help the campaign at the booth level by asking supporters to share their Voter-IDs (EPIC) via SMS.

We have also gamified this through NaMoNumber (external link) where volunteers can compete with each other in persuading voters to pledge their support to Mission272+ and Modi for prime minister by sending their Voter-ID to us via SMS to 07820078200.

Today with million-plus touch points, India272+ is playing a key role in engaging volunteers to contribute to the success of Mission272+.

Do you think the BJP alone can touch the 272 mark?

The campaign for Modi online has worked like a charm. How about the other parts of the country where there is no access to the Internet?

You will be surprised at how wide the Mission272+ Internet campaign has been in terms of its reach across India. Let me share some statistics with you. Today we have volunteers on India272+ in all of 543 Lok Sabha seats. Every one of them signed up to volunteer through the Internet.

We have pledges of support of people sharing voter-id via SMS in almost all of the constituencies barring a couple. We have a large number of people expressing support through missed calls. The combination of the Internet and SMS has worked very well for India272+ with the Internet being the primary touch point to engage volunteers and SMS/missed-calls being the secondary touch point.

We are getting to a point where access to the Internet will no longer be a concern.

WhatsApp is a great example of how a wider demographic is getting connected with the campaign using their mobile handsets from all corners of the country.

At India272+ our approach has been to drive on-ground campaigning with online as a catalyst. Our volunteers have been very active in door to door campaigning, organising chai chaupals, manthan and mock parliaments in their neighbourhood. These help in continued engagement with voters.

You have analysed over 100 Modi speeches. Can you tell us what makes him different from the other speakers?

Modi is the number one political speech maker in the country today. He has brought back the genre of powerful speech making to the political arena after 10 years of uninspiring leaders and hardly any great speech makers on the national scene.

Modi's speech making is different on the following counts.

He is a great listener. In tune with the Internet generation he is a firm believer in crowdsourcing. Modi's first crowdsourced speech in this campaigning was in July 2013 when he went to the Fergusson College in Pune.

Since then almost every one of Modi's speeches has solicited crowdsourced inputs from Mission272+ volunteers. There is a structured process by which the inputs provided by the volunteers are analysed and compiled and shared with Modi's office. Some of the salient points from volunteers then find their way into Modi's speeches based on his judgment.

This helps the speeches to be both contextual and relevant locally given how far and wide Modi has travelled during this campaign.

The other aspect of Modi's speech making that makes him such an effective orator is his ability to converse with the audience establishing an intimate connection. This makes the speech a sort of two-way conversation as opposed to being a one-way monologue.

There are going to be a comparison between Modi and Atal Bihari Vajpayee. Could you tell us the key differences between the two leaders -- oratory skills, administration and acceptability.

It is not for me to make a comparison between these two leaders, both of who shine in their own right. I can say this that our volunteers draw inspiration from both of them.

With 20 plus parties joining the NDA under Modi for the 2014 Lok Sabha campaign the 'acceptability' charge made by some has been proven wrong.

The last couple of weeks have been about many leaders in the BJP being sidelined. How does this impact the party? What are the pros and cons of such actions?

We are laser focused on Mission272+. All of our volunteers are working at the constituency level to make a difference so every vote and every booth counts.

We have created constituency level groups where volunteers can engage with their candidates. This has brought candidates and volunteers closer and to work with a shared sense of purpose.

These political distractions may be a topic for media speculation, but to our volunteers they are a non-issue. Our volunteers are using social media, phone calls and SMS to ensure that our supporters and sympathisers are turning out to vote.

What is the thinking among NRIs about Modi? How does he impact their lives if he were to become the prime minister?

We have volunteers from all parts of India and from across the world. There are a number of anecdotes of how our volunteers from countries ranging from Singapore to the United States have taken leave from their jobs and families abroad to come to India to help with the campaign and to vote to make Modi India's next prime minister.

We must thank the Election Commission for allowing NRIs to register and vote. In the future if the online voting option becomes available to NRIs it would be a great boost. I would also like to mention one India272+ volunteer group for the specially-abled that is led by one of our NRI volunteers.

How effective is Team BJP for Mission272+?

I can say this campaign has come together as a team effort very well because it does not operate in a top down, centralised command and control mode.

Mission272+ has been effective because it operates as a distributed ecosystem. Our volunteers are helping Modi and team BJP in the 2014 campaign as an ecosystem for Mission272+.

Image: A screenshot of the Mission272+ Web site 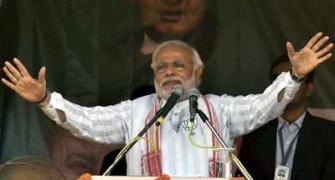 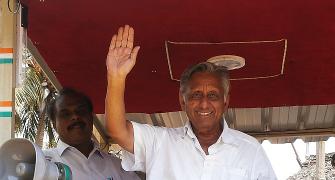 'I am the most venomous speaker around. I can spew poison' 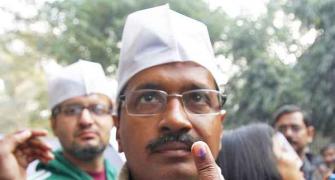 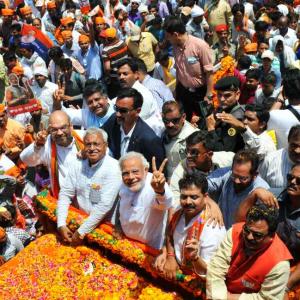 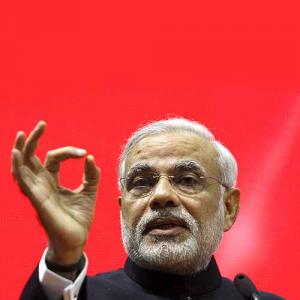