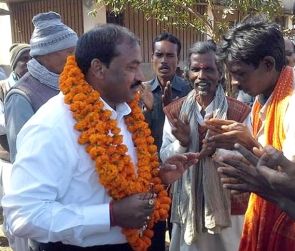 'Fighting Meira Kumar is not a daunting task at all. I hope to give her a very tough fight...'

'Bihar is one state where my Chief Minister Nitish Kumar has challenged Narendra Modi's candidature. As a challenge he should have contested from Bihar and proved Nitish Kumar wrong.'

'If he has so many supporters in Bihar and is going to win so many seats here, why can't he contest from Bihar?' asks Dr K P Ramaiah, an IAS officer till a few months ago, now fighting his first election from Sasaram, Bihar.

Dr K P Ramaiah, a recently retired Indian Administrative Service officer, has sent out messages on his phone contact list and on Facebook asking for donations for his first electoral campaign in Sasaram.

"I have asked for Rs 100 to Rs 500 from their earnings which would be a great help," says the senior bureaucrat who opted for voluntary retirement and is the Janata Dal-United candidate against the Congress's Meira Kumar and the Bharatiya Janata Party's Chhedi Paswan.

After spending nearly 30 years in Bihar, the Andhra Pradesh native calls himself a Bihari and hopes the long years of work in different districts of the state will serve him in good stead.

"I bear a grudge against Madam Speaker for blocking the relay on the day the Bill for the separation of Andhra Pradesh was going to be put to vote," he says and harks back to the time when Meira Kumar was twice defeated in Sasaram, a Lok Sabha seat reserved for the scheduled castes.

As Nitish Kumar addresses a rally in his constituency, K P Ramaiah, former principal secretary, Bihar, SC/ST welfare, is hopeful that once again a bureaucrat will get the better of his opponents. Meira Kumar is a former Indian Foreign Service officer herself. Her legendary father Babu Jagjivan Ram represented Sasaram for nearly 30 years in Parliament.

In a telephone conversation, he tells Rediff.com's Archana Masih the difficulties of a non-politician fighting his first election, how Meira Kumar is a Dalit leader only in name and wonders why Narendra Modi did not contest from Bihar.

Have you been sending bulk SMSes to people asking for donations for your campaign?

I have sent messages to 909 people on my phone list. It is not in thousands. I have requested them if they could contribute something from their salaries and earnings -- Rs 100 to Rs 500 -- that would be a great help to me.

What has the response been?

I have roughly received Rs 1 lakh to Rs 1.5 lakhs. It is heartening.

How hard is it for a non-politician to fight an election in India?

It is a very difficult task. You have to be very cooperative with party workers and every individual. Every person wants to talk to you.

As a bureaucrat you have the chance of avoiding people, as a politician you cannot.

As a politician you have to be very close, very proximate to the people.

The sudden move from a bureaucrat to politician is very difficult. It would be difficult for anyone to assume this new role of politics.

Seeing the entrenched corruption, the hold of dynasties in politics -- what are some of the difficulties for a fresh entrant like you?

If you really go along with the people, it won't be very difficult. But you have to procure everything yourself -- men, vehicles, campaign material. While established people and dynasts have all these advantages.

But isn't your party helping you?

The party's help depends on how big your party is, how long your party has been in power, how they have formed their association, organisation -- whether it has been done properly etc.

How much money do you think you need to fight this election?

I am a new entrant and I am looking at the expenditure and seeing how it is rising. I can't say exactly how much money I am going to need, but it cannot be less than Rs 15 lakhs to Rs 20 lakhs.

There are about 1,600 polling stations and you have to at least visit those areas and put your people as polling agents.

You have to provide them with some kind of tea, coffee, snacks -- on the day of the poll and the day before the poll.

So far what I have raised is very little. In politics, you can't say that amount is going to be anyway helpful.

This election seems to have many bureaucrats in the fray. What do you think is making bureaucrats move to the other side?

As bureaucrats we have seen politicians, their power, privileges and how they treat bureaucrats.

By entering politics, we bureaucrats want to bring some change in the behaviour of erstwhile politicians.

Why did you take voluntary retirement and join politics?

Getting into politics was a sudden and abrupt decision. I had no intention of fighting elections, but since I am from the Dalit community, I have seen Dalit leaders criticise certain political parties for not treating scheduled castes people well, and all of a sudden they have somersaulted and joined those political parties.

These people were deceiving and betraying the scheduled caste community. I thought there should be some kind of proper leadership.

Meira Kumar is a big Dalit leader herself?

She is a Dalit leader in the media and in the Congress party.

She is no more a Dalit. She is married to person from a different community.

But she has been a very prominent leader who is a Dalit and has held powerful positions -- she is the first woman Speaker of the Lok Sabha.

Some Dalit leaders have been pampered by different political parties. One must not forget that she has been defeated here twice.

Have you met Ms Meira Kumar?

I have served as divisional commissioner and sub divisional officer for some time here, she never spoke to us and never responded to our telephone calls also.

It must be a daunting task to be pitched in your first electoral battle against a five time MP and Speaker of the Lok Sabha.

It is not a daunting task at all. She nevers visit their constituencies. She has never been sensitive to the problems of the people. She has not seen the villages.

She only travels on the main road and GT Road (Grand Trunk Road, one of Asia's oldest roads that runs through Bangladesh, Bengal, Bihar, Pakistan and Afghanistan). How long will people tolerate this?

As an officer, I have worked here and know the problems of the people. I am moving around with the people and hope to give Meira Kumar a very tough fight.

So you think you are in a good position to defeat Meira Kumar?

Definitely. I am moving in the area. I am seeing the response of the people and I hope I will defeat her.

Do you think this was a wrong time for you to join the JD-U when the odds are stacked against Nitish Kumar and his party?

I am a bureaucrat and I have seen here what this party stands for. It stands for secularism and inclusive growth.

Mr Nitish Kumar is honestly and sincerely working to bring a change in Bihar.

Previously, there were no roads, we have seen roads now.

Previously, law and order was very bad, now it has improved.

Social security has improved, so there are many good things that are happening here -- and in these circumstances, people are shifting their loyalty like frogs in the rainy season.

(Chhedi Paswan, the BJP candidate from Sasaram, recently quit the JD-U. He has defeated Meira Kumar twice in 1989 and 1991. Several other JD-U members have defected in the poll season.)

In these circumstances bureaucrats and politicians should strengthen the hands of Nitish Kumar.

Hasn't Nitish Kumar been pushed into a corner after his split from the BJP?

It is media hype. The BJP people are very vocal. They have got people in the press and all sorts of propaganda techniques.

Narendra Modi is contesting from Varanasi, if he has so many supporters here and is going to win so many seats in Bihar, why can't he contest from Bihar?

Why is he not coming here? Why is he fighting from UP? Why not only from his own state?

Because the BJP wants to him to win from the most important state in the electoral battle -- and from the holy city of Varanasi.

But Bihar is one state where my Chief Minister Nitish Kumar has challenged his candidature. As a challenge he should have contested from Bihar and proved Nitish Kumar wrong.

Is it true that you were even being wooed by Jaganmohan Reddy?

One of my relatives was with Jaganmohan Reddy's father, the late Andhra Pradesh chief minister, Y S Rajsekhara Reddy, when he died in the chopper crash.

Mr Subramanyam was my relative and we were classmates from the 1983 IAS batch.

My family has a connection with Jaganmohan Reddy. He asked me since Subrahmanyam is no longer there why don't you come and take up some issues in the party in Andhra.

I have been away from Andhra for 20, 30 years and I thought I will take voluntary retirement and join in Andhra.

Meanwhile Dalit leaders started jumping to other parties and shifting their loyalties, so I thought it was better to be with Nitish Kumar in these kind of circumstances.

After spending so many years here, I am more of a Bihari than an Andhra-ite.

I have another reason to contest against this lady Meira Kumar.

In Parliament she stopped the direct relay on the day the Bill for the separation of Andhra Pradesh was going to be put for voting.

All proceedings were done in such a clandestine way and the entire nation has seen that.

I am an Andhra-ite. I have a grudge against her for that. 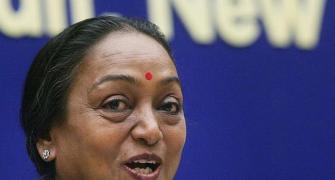 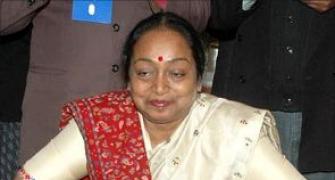 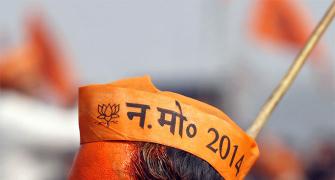 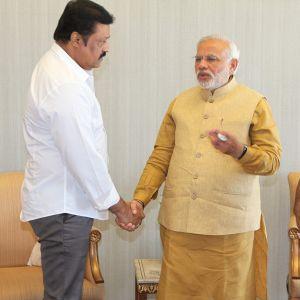 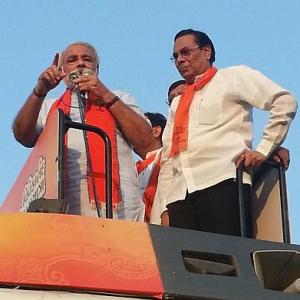