'BJP takes the support of Lingayats and later on they throw them out, ditch them and humiliate them.' 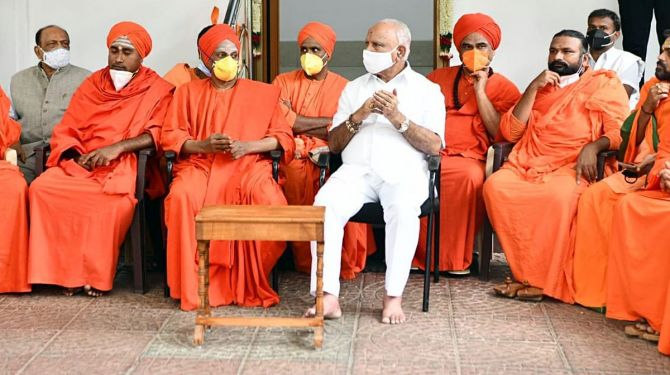 After months of speculation over his exit, B S Yediyurappa finally resigned as Karnataka chief minister on Monday, July 26, 2021.

A powerful Lingayat community leader, 78-year-old Yediyurappa could not complete his term owing to the internal politics of the Bharatiya Janata Party. In fact, the four-time chief minister holds the distinction of never having completed a full term in office.

So how does the Lingayat community, which accounts for 16 percent of the electorate in Karnataka and which has stood solidly by Yediyurappa and by extension the BJP, view his exit?

Lingayat leader Eshwar Khandre -- working president of the Congress's Karnataka unit -- tells Syed Firdaus Ashraf/Rediff.com, "The community which voted for him and felt that they will lead the government is now disenchanted."

How will Yediyurappa's exit be seen by the Lingayat community?

In Karnataka people are fed up with the Bharatiya Janata Party government. The fact is that this BJP government in Karnataka is not a legitimate government. This government was formed on the basis of defections and immorality through Operation Kamal -- by inducing MLAs from other political parties. They made MLAs resign from other parties and came to power through the backdoor.

In these two years of Yediyurappa's regime they did not fulfill the aspirations of the people. The Karnataka government and central government failed on all fronts.

Yediyurappa is the tallest leader in the Lingayat community from the BJP. Will the BJP not be impacted by his ouster?

Yes, it is a fact that he is a powerful leader in the BJP from the Lingayat community, but the community too was not happy with him. It is because of the way he handled the Covid crisis as there were so many irregularities. The transfer mafia was ruling. Labourers and farmers too were affected badly during Covid and he did not do anything to help them.

Moreover, there were corruption allegations too and he failed to fulfill his promises. The community which voted for him and felt that they will lead the government is now disenchanted.

Lingayats are frustrated with the BJP after Yediyurappa's exit.

Many Lingayat seers met him before his exit and one thought something would work out for him.

It is an internal matter of the BJP. Being a Congress working president (from Karnataka) I can say from the beginning itself, the way they formed the government, things would collapse. The administration had collapsed and now it will deteriorate further.

Do you think Yediyurappa's exit will help the Congress get the Lingayat votes?

Lingayats are one of the most powerful communities in Karnataka with clout over 100 assembly constituencies. It is said no party can form the government without their support.

Yes. They are a powerful, major community in Karnataka. They have been doing great work for the economic upliftment of the poor and downtrodden. Their mutts work on all these fronts. They are now frustrated with the BJP.

If the BJP gets another Lingayat leader as chief minister, do you think it will pacify the community?

It is not like that, because the BJP is controlled by the Sangh Parivar. Secular people and especially the Lingayat community have come to the conclusion that the Sangh Parivar plays a major important role (in the BJP). They disturb every thing. They have their own hidden communal agenda. They propagate the Varnashram system.

Even other communities in Karnataka feel the BJP has humiliated Yediyurappa though he had his own limitations and negatives. The real colour of the BJP and Sangh Parivar has now come out in the open.

So having another Lingayat CM will not help the BJP?

Considering that deep inroads have been made by the Sangh Parivar in the state, can we call Karnataka a Hindutva state?

Karnataka can never become a Hindutva state. The BJP got a majority in the Lok Sabha from Karnataka due to many reasons.

They got votes in the name of nationalism and the Balakot airstrike that time and it must have helped them then.

In the assembly elections they projected a strong Lingayat community leader (in Yediyurappa) and that might have helped them.

We (the Congress) made some mistakes at that time, you can say, but Karnataka is secular and will remain secular.

Hindutva will not work here and the BJP will be thrown out of Karnataka in the next elections.

Then Congress chief minister Siddaramiah too gave many sops to the Lingayat community before the last assembly elections, but that did not help the party.

At that point of time, I think Congressmen were not able reach the people in time and convince the people of the (good work) we have done. 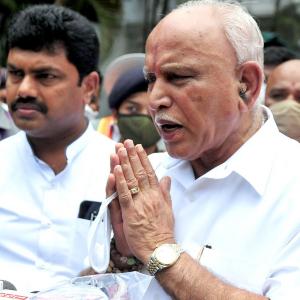