'There is no absolute objective history' 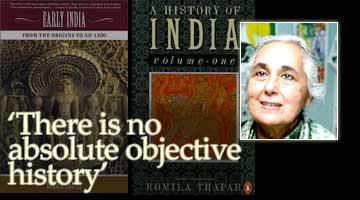 Professor Romila Thapar, one of India's finest historians, is in the news again -- for refusing the Padma Bhushan. During the reign of the National Democratic Alliance government, she was in the news for a series of run-ins with the ideologues of the Bharatiya Janata Party, the largest party in the NDA coalition. The BJP was keen to do away with her interpretation of history and present a new version -- which was questioned by most historians for its authenticity and interpretation since it sought to glorify the Hindu aspects at the cost of non-Hindu aspects. The United Progressive Alliance government put an end to the 'rewriting' of history.

After responding to questions from Deputy Managing Editor Amberish K Diwanji on why she refused the Padma Bhushan, Professor Thapar dwelt on the study of Indian history in the country today. The second of a three-part interview:

Part I: 'I have a sense of unease about State awards'

How would you assess the study of Indian history at present? Is much research being done?

Oh yes, there is an enormous amount that is being done. The public perception of history generally goes back to books that were written 50 years ago or so, but in fact, in the last half century, much has been done to further the methods of historical writing. The basis of this has become much more specialised, and historical research much more complex.

Now we speak about the historical method, which wasn't talked about when I was a student. It is a method that requires a historian to assess evidence -- and particularly its reliability -- to analyse it, to examine as many causes as possible, to argue for a priority of causes, and then to finally to bring the argument together in a historical generalisation. There is a method to the procedures and to specialised research. This is something that the press, the visual media and the politicians don't understand when they readily pronounce on history.

The point that I have been making all along in the issue that was being discussed during the period of the BJP government about NCERT (National Council of Educational Research and Training) textbooks is the difference between textbooks and research. Textbooks are never at the cutting edge of knowledge because the main purpose of a textbook is to encapsulate the mainstream of accepted knowledge. Those on the frontiers of knowledge, propounding new theories, do not include these in textbooks. Maybe some years from now, when this knowledge becomes part of the mainstream knowledge, it will become part of textbooks.

But many who took part in this debate during the last five years were unfamiliar with the kind of historical research that was being carried out because they didn't read the books we were writing. They were commenting on us as historians on the basis of what they read in the textbooks, if at all they read the textbooks.

So the attack on me was because I had talked about the eating of beef in the Vedic period in a Class VI textbook. This has been an established fact in historical research for many decades and therefore has found its way into a textbook. And the people who were vilifying me as a historian were people who had certainly not read my other books on history.

But is there a case that ultimately the version of history we accept is determined by ideology?

In the case of the confrontation with the BJP it was not just ideology but also the intention of using history as part of an ideology geared to political mobilisation. It is something that has been slowly boiling up as it were and was used when the opportunity occurred.

A clear example was the Ram Janmabhoomi movement where there was a misuse of history in order to support political mobilisation. In fact, the historical factor should not have come in at all. If people have a belief in their associations with a particular place, and it is an appeal to faith, this has nothing to do with the history of the place. You can't bring history into faith. But there is the feeling all the time that in order to strengthen the argument, if you can say there is historical proof as well, then it becomes much stronger.

There are various ways of seeing ideology. Where ideology is the driving force of ideas it can lead to shifts in the paradigms of knowledge and to that extent knowledge can be driven by a context that includes ideology. This has been argued even for much of scientific advance. The point here is that knowledge is that which makes advances or overcomes any kind of ideological constraints and goes forward.

But at a more ordinary level, there is the kind of ideology that becomes a mechanism for political mobilisation. This has nothing to do with knowledge. It has to do with a political intention and political agenda. Therefore the attack should not be on the driving force of knowledge but on the intention of using ideology for political gain.

Aren't you contradicting yourself here? If knowledge is driven by ideology.

(Interrupting) No, I am not saying it is driven by ideology. There is a difference. Ideology may play a role in pushing knowledge in a particular direction, but this is a different kind of ideology as it does not require people to demolish historical monuments. The popular definition of ideology is more a programme for political action.

But wouldn't it have the tinge of the ideology that drove it?

If the word ideology is used in its widest sense, namely, the manner of thinking of individuals, then everything has a tinge of ideology; the way one speaks, what one eats, how one thinks that is part of life and in part an explanation of what one is. From this perspective all our attitudes to life are tinged with ideology.

Does that mean there is no such thing as objective history?

There is no absolute objective history but some histories are more objective than others based on how the historical methods are used. There are no absolutes.

Don't miss the concluding segment of the interview!

Part III: 'Media wants a byte, not a book' 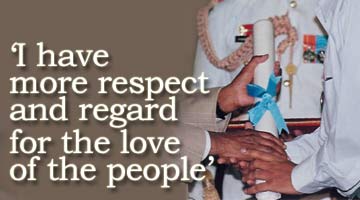 'I have more respect for the love of the people' 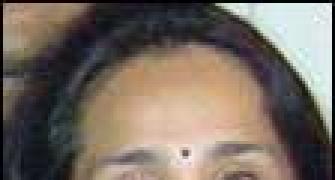 'I am not for rewriting Hinduism'