'In a complex conflict like Kashmir, you can't just ignore the militants when you talk of a permanent solution.' 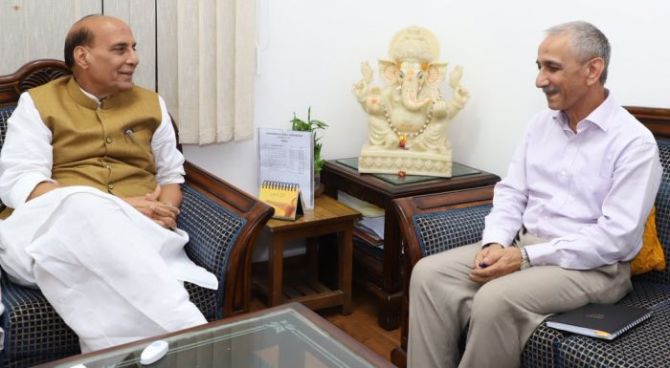 Indian diplomats thought Raphel meddled excessively in Kashmir and believed she was pro-Pakistan.

Raphel -- who also served as an advisor to then secretary of state Hillary Clinton -- spoke to Pervez Majeed in Washington, DC in an exclusive and rare interview. The final section of a three-part interview.

Do you think the Government of India, besides having a dialogue with political dissidents, should talk to militants as well?

If you want to get to the bottom of the situation in Kashmir, which by now has layers and layers...

You need to be aware and be sure you understand the position of everybody and I think sometimes governments get stuck on not talking to this or that group...

So I think in a complex conflict like Kashmir, you can't just ignore the militants when you talk of a permanent solution.

Do you foresee India will accede to some sort of autonomy to J&K as a part of the solution which you suggest?

That is what I think should happen.

In the current situation I find it very hard to predict because this current government in Delhi doesn't seem to be heading in that direction.

But I think at some stage, in order to have a sustainable and stable resolution in which Kashmiris really feel a part of India, that is what India has to do.

As a diplomat who has been closely involved with India, what are your views about the current BJP government in Delhi?

See, for the US and outside world what was admirable about India was this country's ability to balance different religions and ethnicities and a huge Muslim population.

But now what I read is in contrast with what I have witnessed in India.

I hope the present direction towards which India seems to be going, will not go. That would be unfortunate for India.

As President Clinton's key diplomat for South Asia, some people have accused you of being 'too sympathetic' towards Pakistan at the cost of US-India relations...

That's total nonsense. I was always very straightforward with both sides and that made them happy sometimes and concerned them the other times.

I like and am fascinated by both countries and I am impressed by how they have dealt with their history, their birth and moved on after a troubled beginning.

There is this overwhelming belief that the military in Pakistan over-rides the decisions of the civilian government, which adversely impacts US-Pakistan and India-Pakistan relations as well.
Since you are considered an expert on Pakistan, what are your views?

Let me tell you that the Pakistani military is the most organised, disciplined and cohesive group in Pakistan.

And you know this country is only 70 years old and since political parties are less mature and less disciplined and for fear of losing portions of their vote banks they don't push for the kind of reforms that Pakistan needs.

My impression is that the military is not interested in taking over the government at this point because it realises the likely repercussions, and it is occupied with fighting in FATA.

So what I would say is that it is not so much the desire of the military to over-ride government decisions as it is actually political parties have not evolved to the extent they should have.

In fact, when we used to talk to military leaders we used to get this impression that they don't want to manage the political affairs of the country, but circumstances force them to!

Hope the civilian side in Pakistan is maturing and of late the military too has a lot of their mandated affairs of the country so we won't see more of the military on the political scene.

What are your views about the China-Pakistan Economic Corridor and the perceived increase in Chinese influence on Pakistan?

I think that if it is managed properly, and there is no reason to believe it shouldn't be, that it is a good thing for Pakistan.

The Chinese have capital to invest and businesses to employ people. So it is a natural match.

Pakistan needs economic reforms for economic stability and that will contribute to the political and security stability in Pakistan which actually the US wants there, and in fact India wants as well.

So India or the US should not object to this because it doesn't threaten them.