News
Business
Movies
Sports
Cricket
Get Ahead
Money Tips
Shopping
Sign in  |  Create a Rediffmail account
Rediff.com  » News » 'India is secular because it is Hindu'

'We have Hindu values, Hindu customs, Hindu philosophy, Hindu way of looking at all religions as acceptable.'
'These are all great assets of India.' 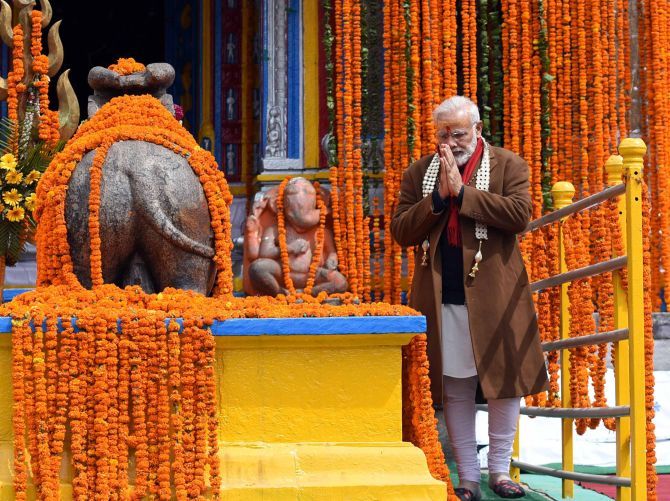 Do you feel running a corruption-free government is Narendra Modi's biggest achievement?

It is a fundamental achievement.

Modi cannot hope to do anything unless he runs an honest government. It was believed as something not possible in India.

But Narendra Modi showed that it was possible.

This is his fundamental approach to politics. It has taken time to turn the current drift in politics and make honest decision-making part of the process.

He sat and appointed 75 joint secretaries which no prime minister would ever do.

That is where the right and wrong commences in the administration.

The criticism is that it is not the various ministries, but the Prime Minister's Office that runs the country.

I would say the PMO is involved in running the government.

In Manmohan Singh's period, there was no PMO. Because of that, decision making was laterally interfered.

There is cohesion in the administration and complete consultation.

Decision making is effective and has the backing of the prime minister.

Backing of the prime minister does not mean that he is the only decision maker and is autocratic.

If running a corruption-free government is an achievement, would you say the actions of the cow vigilantes, the lynching of innocent people, are black spots?

This kind of lynching has been taking place for a long time and cow vigilantes have always been there.

Because of this government, it has been magnified.

I am not saying it's right. But has it been approved by the government?

When a lynching takes place, is the government not punishing the people behind it?

They were booked by the police. Narendra Modi has personally condemned the cow vigilantes.

Are you saying that large scale riots are taking place under his rule?

The most talked about issue in the country right now is beef politics.
Is it right on the part of the state to interfere in the eating habits of people?

The State is not interfering in the eating habits of people.

If you don't save your bovine now, in a decade, you will be importing milk.

If you promote the beef eating habit, the environment will be finished.

Why did the Paris climate summit promoters think of the concept of a meatless Monday? Because meat damages the environment.

China is asking its people halve their meat consumption.

Even if it is interference in the eating habit of the people it is environment friendly. It is not wrong.

When bovine wealth is lost and agriculture and environment is affected, the government can put reasonable restrictions.

In India cows are not just like any other animal.

Under the Constitution the government has an obligation to protect the cow and its progeny.

Article 48 of the Constitution casts this obligation.

The Supreme Court decided in 2005 that even aged and economically useless cows also need to be protected because cow dung and cow urine are sources of organic enrichment of the soil.

The Supreme Court, in effect, said there is no useless cow.

The Supreme Court held that Article 48 which stands for public good overrides individual rights of choice of food.

Today many countries are restricting beef to protect the environment.

Also, 18 out of 29 states have banned cow slaughter, and most of them did it when the Congress was the ruling party.

Are they also interfering in the food habits of the people?

How is it that the cow has become communal now?

In the 1970s, the cow and calf were the election symbol of the Congress.

Today, the Congress is slaughtering a calf. What a perverse decline!

In a state like Kerala, Hindus eat beef unlike northern India. So also Hindus in Bengal, Tamil Nadu and the north eastern states.

Okay, you agree that it is not a communal issue and not targeted at Muslims.

Why don't you say it is targeted to protect the bovine wealth of India, agriculture and environment?

Where does the Muslim come in when the entire northeast eats Mithun which is a lookalike of the cow?

Should the states not be deciding that?
Kerala Chief Minister Pinarayi Vijayan said Nagpur (meaning the RSS headquarters) and Delhi should not dictate what the states should eat.

Has anybody prevented them from eating beef?

Let them eat if they want. Why are they converting an environmental issue into a beef issue?

The law only said that you cannot sell cattle in the market. You privately buy and eat.

If you put 50% tax on beef, you can say the government is preventing people from eating beef.

That is precisely what the West is now attempting to do -- to tax beef beyond the eating power of the people.

When farmers sell cows to someone, are you not giving the cow vigilantes an opportunity to harass people?

Let the cow vigilantes act, then we will see what to do.

Why are we imagining things?

Modi's critics say the Hinduisation of India is happening ever since he came to power.

India is a Hinduised country and that is why it is secular.

If it is an Islamised country, where will secularism be?

Nehru said when he wrote Glimpses of World History, that the line of distinction between Indian nationalism and Hindu nationalism is very thin because India is the only country where Hindus are the majority of the population.

This has always been the case.

But post Partition and Independence, the secular discourse became perverse.

This is the worst thing that can happen to secularism.

You cannot say that India has nothing to do with Hinduism.

We have Hindu values, Hindu customs, Hindu philosophy, a Hindu way of looking at all religions as acceptable.

These are all great assets of India.

India is secular because it is Hindu.

When you talk like this, won't people belonging to other religions feel alienated?

Why should they feel alienated?

Muslims must be happy that India is not a Muslim majority country like Pakistan.

See what is happening there to the Shias, the Ahmediyas and generally the non-Sunnis.

The Hindu culture is the core culture. It cannot be denied.

The secular discourse has perverted the identity of India.

You look at the first Constitution of India.

It contains pictures from the Ramayana, the Mahabharata in it.

The founding fathers of the Constitution who signed the first book did not see any conflict between a Hindu identity and secular India.

When somebody questions the government or disagrees with it, he or she is called anti-national.

That is because many of those who question are anti-nationals.

Look at their records. How they are supporting separatists, how they are building a brand of India as an intolerant nation.

When some people are doing wrong things, you can call them intolerant, but how can you say the nation is intolerant?

When you say that, are you not anti-national?

Are you happy with the way the Modi government has performed?

I am happy because he has been able to shut the mouths of people who called him Hitler.

He showed that a person who is a Hindu cultural nationalist is fair to all.

He could capture world attention and he could fix Pakistan.

He has been able to deal with a firm hand in Kashmir.

I think in 3 years, he could do what most prime ministers could do in say 10 years.

Remember he began with a minus 5.

Where does he stand now?

What Narendra Modi has done is out of the world.

Even his adversaries concede that he is a performer and not just an actor.

He takes risks and decisions, which not many prime ministers do.

After the Pokhran atomic blast, there was no high risk nationalist decision except during Modi's time.

But I do feel that some of his Cabinet colleagues have not measured up to the level of performance that is needed.

There are gaps in the ministries and these are the areas where decision making had to be faster.

Yes, the government has not been successful in pushing the Mudra Yojana scheme, which is very necessary for economic growth as it is these small companies that can generate growth and provide much needed jobs.

This has been delayed by two years and it is a measure of failure on the part of this government.

IMAGE: Prime Minister Narendra Modi at the Kedarnath Temple in May when it reopened for devotees after remaining closed for six months for the winter. Photograph: Press Information Bureau