News
Business
Movies
Sports
Cricket
Get Ahead
Money Tips
Shopping
Sign in  |  Create a Rediffmail account
Rediff.com  » News » 'I will give 98% marks to Chandrayaan 2 mission'

'When you look at it from the point of view of science, Chandrayaan 2 is a big success.' IMAGE: The ISRO Telemetry, Tracking and Command Network, Bengaluru, has been tracking the Chandrayaan 2 mission.

As the Indian Space Research Organisation struggles to make contact with its Moon lander Vikram, with each passing day the chances of establishing a communication link between the orbiter and the lander grows dim.

"We need not be unhappy or disappointed. We will be able to find the reason soon and correct it in future," former ISRO chairman G Madhavan Nair, tells Shobha Warrier/Rediff.com.

Now that the orbiter has sent a thermal image of lander Vikram on the surface of the Moon, can we call Chandrayaan 2 partially successful? Or, do you feel it has failed in its objective?

Chandrayaan 2 has got several elements to it, starting with the launch vehicle GSLV Mark 3, then getting away from the Earth's orbit and reaching the Moon.

After reaching the Moon, the orbiter moves around the Moon, and then the three modules -- orbiter, lander and rover -- will independently function.

The mission was 100% successful till it reached the Moon; everything went on precisely.

After that, the lander had to separate from the orbiter and slowly descend on to the surface of the Moon, which also went successfully. The trajectory was as predicted until the last minute.

It was then that a deviation happened.

Was it because of a braking problem that the lander had a hard landing, thus losing communication?

Reduction in speed is achieved in two phases. In the first phase, the reduction is at a fast rate, that is, from 1.6 km/second, it has to come down to around 30 metres per second. This was successful.

But from 30 to 0 is controlled in a very mild manner by switching off the main engines, with the four auxiliary engines switched on. Even after that, it was going all right for several seconds.

Now, we have only the data from the orbiter available to us which shows that the lander has touched down on the surface very close to the predicted point.

It's a very big plus point because if the braking went the right way, we would have landed at the precise location.

What could have been the reason why the braking failed?

This phase is very complex because several sensors are used.

There are the stereo cameras, laser altimeter, gyroscope, accelerometer, etc. All the data from them goes to the onboard computer. This computer has to implement a software and guide the capsule down.

Also, four thrusters are used for reduction in speed. We can get into trouble if any one of these elements malfunction.

That's why Dr K Sivan (ISRO chairman) used to say, it would be 15 minutes of terror, and it turned out to be really so.

And we are yet to find out why and how it happened...

We have clear data available up to the last braking point. With that, we will be able to reconstruct what went wrong and what triggered the loss of communication.

That process is going on right now. Maybe in a few days, we may be able to pinpoint what exactly happened.

We expected it to have a soft landing which means when it touches the surface of the Moon, the speed has to be very low, something like 1 to 2 metres per second.

But the lander has come down at more than 30 metres per second. It is like a car hitting somewhere at 100 km/hour compared to 1 km/hour. It will make that much of a difference.

What kind of negative impact will a hard landing have on the lander?

It can create a shock on the lander and that shock can upset other elements also. If we have to analyse that, we have to have communication with the lander. They are trying to do that now.

That way, I will give 98% marks for the whole mission. I would say, we are little bit away from perfection.

It has achieved 95% marks till the landing and in the next phase also, it has achieved a major part of the mission. Only a small component is missing.

Because communication was lost between the lander and the orbiter, won't the rover Pragyan be able to come out of the lander?

Normally the rover comes out on four legs. But the lander is in a tilted position. So, the door is not facing a side properly, which means we will not be able to open the door.

Was it because of the hard landing that the lander is in a tilted position?

Yes, hard landing is the reason.

Is that why you opt for a soft landing?

All the instruments in the lander are very sensitive ones and if you drop them, they will fail. That's why you have to bring it down very slowly and have a gentle placement.

Like Dr Sivan said, it was like placing a baby softly in the cradle. That was the kind of operation they were trying to do, and for the first time.

I think nobody has done such a complex operation. That was why the others have failed 50% of the time.

Do other nations perform soft landing these days?

The Chinese had attempted a few times unsuccessfully, but a few months ago, they could do soft landing on the darker side of the Moon.

Yes, it was a very narrow miss for us. We need not be unhappy or disappointed. We will be able to find the reason soon and correct it in future. Now that the space centre has communication only with the orbiter, what kind of information can it send us?

We can get plenty of information. Actually, the orbiter is the main scientific experiment module.

There are eight major instruments in the orbiter like stereo images, thermal images, etc. So, we will be able to do the entire mapping of the lunar surface.

Compared to Chandrayaan 1, which was in a 200 km altitude, this is placed in a 100 km altitude. It means this orbiter is closer to the moon. So, the resolution and accuracy of the data it sends will be higher.

Other than helping us reconfirm most of the findings, we may get some new information because of the fine and sensitive nature of the data.

This spacecraft was originally designed for a two-year life. The life is limited by the onboard fuel.

Now that the launch was perfect with the GSLV giving a better performance, we have extra fuel available in the orbiter. That's why the new forecast says, instead of two years, it can remain in the orbit for seven years.

So, when you look at it from the point of view of science, Chandrayaan 2 is a big success.

Does that mean it was the technology part that failed?

Technology part associated with a little bit of science also. If the rover had come out and picked up samples, we would have confirmed the existence of water by remote observation.

It would have done the job in 15 days. Yes, we have failed in that part.

Is it not disappointing as landing on the south pole was the major part of the Chandrayaan 2 mission?

Yes, scientists were very anxiously looking forward to the in-situ measurement data. That way, it was a disappointment.

Last month, the Israelis also tried to land on the south pole, but failed...

During the landing process, some damage happened to it and like what had happened to lander Vikram, it was also not in the right orientation. So, they were not able to conduct the experiments they had wanted.

Because the lander is a tilted position, how optimistic can we be in changing its position and getting communication back? What are the chances?

Very difficult to say. I will only give 60% probability for a turnaround. If we are lucky, we will get something out of it.

You were also in charge of so many missions. How do scientists come out of such disappointments?

You don't get put off by any negative result. Instead, ISRO always tries to see how to come out of it. That has always been the approach of ISRO.

During my period, the first SLV 3 failed, but within a year, we came back successfully.

When I was the project director, PSLV failed in the first attempt, again within a year we were back.

In between, there was a GSLV failure. At that time also, we took only 2-3 months to decipher the reason, and came back with a new launch.

That way, ISRO has burnt its fingers a number of times. But if you look at the overall global statistics, our record is better.

In space missions, the average success rate is 90%, but ours is better than 95%.

We can be satisfied about that part as our technology is mature and we can perform more precisely.

If the rover doesn't come out and communication is not established, will they abort the mission?

If you are not able to communicate with the lander, only that part of the mission will be written off.

How long will they try?

Within a week or so, they will be able to take a decision, one way or the other.

After that, we will start thinking about the next mission, a similar one with all the corrections. Maybe more sophisticated as we have learnt many things from this mission.

It may take two years and I am sure within two years, they will be able to achieve another mission.

Will they try a manned mission only after this succeeds?

No, it goes parallelly. Nothing is serial at ISRO.

For the manned mission, very intense work is already progressing. By 2022, we should be able to achieve that.

We will do the manned mission independent of this one.

How much of political will is necessary in such huge space projects?

Various governments have always been supportive of the space ventures, but this time, you would have seen the difference.

The prime minister himself owned up the responsibility in telling the nation about the setback.

It was a remarkable reaction from the prime minister and it will be a big morale boost for ISRO scientists.

Was it only because the Moon's south pole region is unexplored that Chandrayaan 2 was planned to land there?

The south pole region is relatively cooler. You also see more plain surface in that region with less of craters. Therefore, later on if you want to establish an unmanned or manned observatory on the Moon, this is the right location.

Water also is available from the polar ice. That's why other countries are also trying to re-investigate the region.

So, it is going to be race among all these countries to reach the south pole first...

Yes, it is going to be a race. Even the US is planning a Space X launcher and China has already announced its mission. ESA, the European Union Space Agency, also said they were going to establish an observatory there.

These are the three competitors and we are also joining the race. All these countries are planning a man landing on the south pole of the moon by 2030. 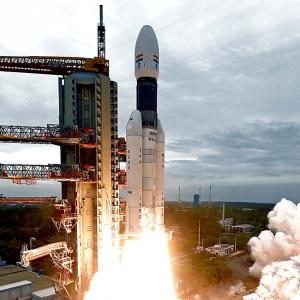