News
Business
Movies
Sports
Cricket
Get Ahead
Money Tips
Shopping
Sign in  |  Create a Rediffmail account
Rediff.com  » News » 'We started as a democracy, but have regressed to a banana republic'

'We started as a democracy, but have regressed to a banana republic' IMAGE: An aerial view of the masterplan for the Rs 200 billion Central Vista Project.

Gautam Bhatia is an award-winning architect, writer and artist.

Bhatia has been in the forefront of critiquing the government on its Centra Vista Project.

"When the present government comes to an end, in this decade or the next, the new government may choose to erect a statue of Microsoft's Satya Nadela and rebuild the Central Vista as an IT complex," Bhatia tells Rashme Sehgal in an exclusive interview for Rediff.com. 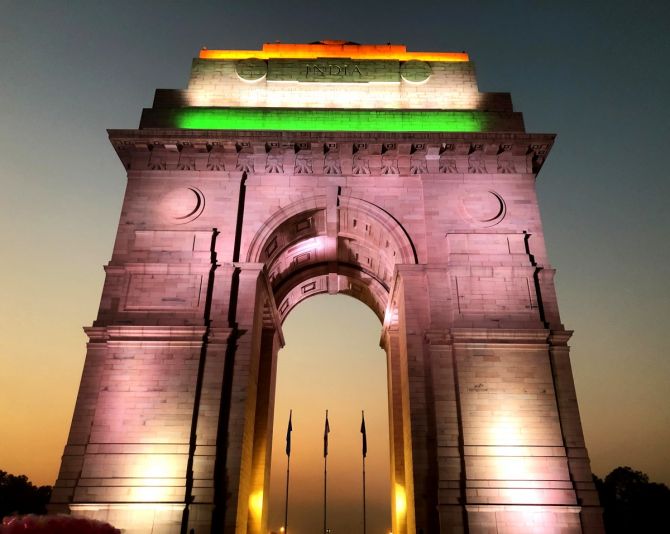 The Central Vista project is going to make us lose some of our most iconic buildings including Vigyan Bhawan, Rail Bhawan, Nirman Bhawan, Udyog Bhawan and, of course, Shastri Bhawan.
These are buildings we Delhites have grown up with even though many have questioned their aesthetics.
Now in one stroke, the history of post-modern India is being effaced. It's a frightening scenario.

I don't think anyone has really loved Nirman Bhawan or Udyog Bhawan or any of the other post-colonial structures built in the 1950 and 1960s.

But certainly, they are an important legacy of that time. Just as the way Select City Mall and the Noida Expressway will be legacies for the future.

No central government is in a position to dictate what is bad architecture, what should be saved, what demolished.

Even more alarming is the destruction of the National Museum. This is a treasure trove of the rarest of rare antiquities that are irreplaceable.
Is there any nation in the world that would pull down its National Museum? An equivalent to this would be if France were to pull down its Louvre.

The National Museum as a piece of architecture may have a dubious ancestry, but it is still linked closely to Indian historic treasures.

Obviously, if the building is demolished, the art inside will remain intact in the new building. And perhaps may even be better displayed.

The current assembly is dim and abysmal. But the National Museum's value is in its long-standing association with the city and its sites.

This itself is reason enough not to disturb it. A more conservative move would have looked at possibilities of renewing the building and absorbing it within the new framework of the Central Vista.

Many of these buildings came up in the late fifties and sixties and were built at a time when the government was extremely cash strapped. But they form part of our cultural memory. Does this seem to have no value for the present government?

In the past couple of years the urge to demolish has overtaken the more sensible urge to conserve and refurbish.

Can a poor country afford to demolish crores worth of construction on a whim? Even the most affluent societies are careful not to build, rebuild and alter without reason.

The White House, the US Capitol have remained externally unchanged for centuries despite the addition of nuclear shelters, high tech communication equipment, basements vaults and interior renovations.

Only in India does a mere increase in the accommodation of MPs in Parliament becomes the logic to demolish and rebuild miles of public buildings on the most visible and public concourse of the city.

We started as a democracy, but have regressed to a banana republic. Many of these buildings are going to be replaced by identical blocks built along Rajpath. These blocks are going to be 39 metres tall, just a little lower than the height of India Gate.
The idea appears to be to swamp India Gate which is looked upon as an alien piece of architecture by the present dispensation forgetting that India Gate carries the names of 70,000 Indian soldiers who had died during the First World War.
The general buzz is that the present dispensation does not like India Gate because it has come to symbolise a place where the public come together to protest and that is also not liked by the present government.

Architecture is very similar to the landscape. You don't cut down a 100-year-old neem tree however gnarled and twisted, and replace it with a sapling, whatever the species.

The design of the proposed identical blocks is not in question. It is a fact of destruction on a monumental civic scale that is.

A government cannot place a ban on the construction of private houses by citing pollution as a reason and then go ahead with setting up the largest pollution factory in the centre of town.

To cite an example, we had once renovated an old medieval palace in Rajasthan some 20 years back. When the contractor doing the restoration saw the budget, he said it would be cheaper to demolish the old palace and build an entirely new one exactly like the old at a little more, than half the cost.

The client chose to err on the side of history than the budget.

Most of us believe that India's most prized land has been co-opted for the benefit of our politicians and bureaucrats?

In no country do politicians and MPs occupy the most prized space of the city. In Sweden, they live in small rental apartments. In England, 10 Downing Street is a small door into the prime minister's townhouse.

The Central Vista has never had a clear architectural vision. The original layout was formed out of Lutyens's plan that combined institutions of governance, buildings of bureaucracy with a cultural smattering of museums and archival structures.

Part maidan, part art gallery, but mostly faceless government office. The place neither bestowed a sense of belonging to the public nor was it completely overtaken by political symbolism of fascist Rome or Speer's Berlin.

The Central Vista always lay hovering in uncertainty. Its most obvious relative is the Washington Mall which began as a government centre, but in the past half, a century has become the most visible space of the American capital, adding museums, art galleries and the like.

The Central Vista comprised the lungs of Delhi. In summer, people from all over the city would flock here for picnics. At New Year, it was a place for celebration.
All that will become something of the past. The place that millions of Delhites looked upon this space as their own is of no value for this government.

More dust than grass, true to all the shabby burdened reality of any Indian city. But truer still to the ways of our democratic governance. The whole tendering process for the execution of this project has been shrouded in secrecy. The public and architects etc have been excluded from this process.
This is unlike most governments today where the activity that involves the public ensures they are actively involved with the process.

Secrecy is the core of much of how public works are awarded in India.

The French government recently held an international architectural competition for replacing the roof structure of the Notre Dome Cathedral. It was awarded to two Chinese architects.

Would the Indian government consider an open competition for the Central Vista? Or award the work to a Chinese architect? Hard to imagine.

But just consider how to work for the ministry of external affairs was awarded.

The MEA building began in the 1990s as a selective competition funded by the government. The designs were displayed in an exhibition and a final decision awaited.

Till the then external affairs minister Jaswant Singh walked in, took a cursory look at the entries, discarded them all and awarded the work to the CPWD.

The multi-crore building was completed in 1995. It is now slated for demolition in the Central Vista plan.

With the government paying no respect to the rule book and with mandatory approvals having been given without the adoption of transparent norms, a very dangerous signal is being sent out that rules can be flouted and bent at will.
All this is happening at the time of social media when information is travelling freely across the globe.
Surprising then that there have been such few protests against this project. Why is that?

The public has filed numerous petitions related to heritage as well as the environment, land-use change, etc. But sadly when something is a matter of national pride, the outcome is a foregone conclusion. There seems to be no architectural vision behind this project. Rather the idea seems to be to project some grandiose vision similar in mindset to the Aryan power being projected by Albert Speer at the time of Hitler or Mussolini's dream of construction imposing buildings that reflect fascist control.

The architecture is primed to a political rather than a cultural vision. Cultural ideals are much harder to express, they are more nuanced and complex.

The present proposal is of the monumental building rather than public space. But even that needs to be revealed more completely -- what are the designs, the internal layouts, etc? How are they better than what they are replacing?

Our iconic Parliament building which for over seven decades have symbolised our democratic dreams has also been given the go by.

Iconic buildings in India either become expensive hotels or museums -- both functions that have no real public value. It would have been better to allow architects to suggest new uses for the old Parliament. Perhaps housing for visiting MPs, or a centre for international politics or negotiations.

What is surprising is that India boasts of so much talent and yet this pool of talent has not been tapped by the government.

One of the most disturbing trends in India is the politicisation of art and architecture.

Why should private architects agree to do political murals and statues or indeed writers commissioned to do biographies of living leaders?

The shameless misuse of mediums is as demeaning to the art as to the artist. The battle for self-aggrandisement will always go on.

If Sardar Patel is crucial for Prime Minister Modi, Ambedkar to Mayawati and Dalit leaders, the new generations will find their own leaders.

When the present government comes to an end, in this decade or the next, the new government may choose to erect a statue of Microsoft's Satya Nadela and rebuild the central Vista as an IT complex.