The BJP has stalled Parliament session for a week, demanding PM Manmohan Singh's resignation. Is the monsoon session going to be a washout, or there is a scope for compromise?

I cannot talk about compromise for the simple reason that instead of reaching out to the opposition, the government and its leader Sonia Gandhi have called upon party members to become more aggressive; a compromise at the moment is meaningless. Compromises have been arrived at in the past, when we were in the government. We had reached out to the Opposition, but we never adopted an aggressive attitude. It is a peculiar situation in which the ruling party is more belligerent. So, what compromise are we talking about?

The BJP has demanded all coal blocks should be de-allocated. Can this be done?

Let's take an example. The government issued 122 2G licences and, by a Supreme Court order, these licences were cancelled, and the apex court directed licences should be auctioned. Now, there was a theory of zero-loss propagated by Kapil Sibal and his own ministry fixed the reserve price for an auction at Rs 14,000 crore for each licence. If it is calculated at Rs 14,000 crore for nine all-India licences, it works out to about Rs 1,26,000 crore. But if it goes beyond that, we are very close to the figure of loss given by CAG.

Similarly, on our insistence, if these coal block allocations are cancelled and auctioned, and anyone can bid in the auction and win the coal blocks, this estimated loss of Rs 1.86 lakh crore by the CAG could be recovered.

The BJP has always said debates and discussions should be allowed in Parliament, but now it is blocking proceedings of the House. Is this a change in strategy?

No, we have always believed in debate and discussion, but the point I would like to make is there are issues for which the sentiment of the people outside the House have to be reflected in Parliament. Obstructing Parliament is a recognised tactic and the Congress party adopted this freely when it was in the opposition. They are now preaching us the values of democracy. The functioning of the Parliament is the responsibility of the government. It is their responsibility to reach out to the Opposition and take their grievances on board. As far as the people are concerned, there is a larger debate among them and they are the ultimate ones to elect people to the Lok Sabha.

The resignation of the PM means the entire Cabinet has to be reconstituted. Is the demand achievable? Is the BJP trying for a mid-term poll?

We are trying to ensure constitutional and parliamentary accountability. The prime minister, as coal minister, permitted loot of natural resources. He was the minister in charge, and this is the distinction we should always keep in mind. Every coal block has been allocated under his signature, so who is accountable to Parliament in our democracy? The minister in charge, who happens to be the PM. So, it is not that the government can sacrifice A Raja and Dayanidhi Maran. It is not merely some other minister who has to take the blame, but it is the PM. Therefore, we are demanding his resignation.

The BJP-NDA regime had started this discussion on foreign direct investment in retail, but now the party is opposing it? Will the BJP agree to it if the government gives some concessions?

Yes, there was a discussion, but no decision. There was a discussion on permitting FDI in retail, but in view of the opposition from various stakeholders we didn't go ahead with it. I would also like to point out in December 2002, the then chief whip of the Congress party in the Lok Sabha, Priya Ranjan Dasmunsi, raised this matter in zero hour and said bringing FDI in retail would be an anti-national step. So, when we are talking about a change in position, I will say if anyone has changed position it is the Congress party. We have looked at it de novo and we feel it is not warranted.

Crucial bills like those on PFRDA (Pension Fund Regulatory and Development Authority), insurance, and banking laws are pending for a long time, as is the Land Acquisition Bill. How can reforms happen if Parliament doesn't function?

PFRDA was initiated during our time and we have always supported this Bill. In fact, we had a discussion with former finance minister Pranab Mukherjee and we told him if they accepted the recommendations of the standing committee on finance, we would support the Bill. Everything was agreed. He even sent a senior officer of his ministry to sit with me and work out the draft amendments, which the government would put forward. But then, their own coalition partner, Trinamool Congress, opposed it. The Insurance Bill is not even listed in the list of bills to be passed in this session, but the one on banking is. Now, taking a view of the financial sector, we should confine ourselves to 26 per cent FDI, whether in insurance, banking or PFRDA. The BJP agrees with the views of the standing committee on finance. We are not in favour of 49 per cent FDI in insurance and pension, and if the government insists on bringing in this legislation, we have no option but to oppose it.

Similarly, the land acquisition was introduced, it went to the standing committee and has come back. Cabinet ministers of this government, even of the Congress party, are opposing the provisions of that Bill. So, who is responsible for the delay in these Bills? It is not merely the paralysis of decision-making, I don't know how to describe this. The government takes a view, brings legislation to Parliament and then takes it back.

The government has said the DTC (Direct Taxes Code) Bill would be reworked.

The DTC Bill was drafted by the finance ministry after receiving suggestions and then, it was brought to Parliament. The Bill was referred to the standing committee on finance. We gave our report one week before the Budget was presented on March 9 this year and now, the finance minister is saying he would have another look at the DTC. So, who is delaying the Bill? And, we have to go through the whole rigmarole again because they consider changing the provisions of the Bill, which was not recommended by the standing committee. Then, it would have to be brought back to the standing committee, like the Companies Bill, which would delay the whole thing.

Finance Minister P Chidambaram has said the GST (Goods and Service Tax) Bill would be tabled before the end of this financial year. Is it a possibility?

The GST Bill, which is under the consideration of the standing committee; I was very keen to present the Bill in this session. But we didn't get the reply of the finance ministry in time. So, that is why the Bill is delayed. 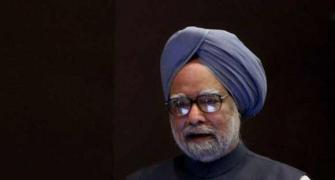 Mr Prime Minister, this is not 'tu-tu main-main': BJP