News
Business
Movies
Sports
Cricket
Get Ahead
Money Tips
Shopping
Sign in  |  Create a Rediffmail account
Rediff.com  » News » 'Both EPS and OPS will probably pull back'

'Both are mature enough to realise that a break will not benefit either of them and both will be losers.' 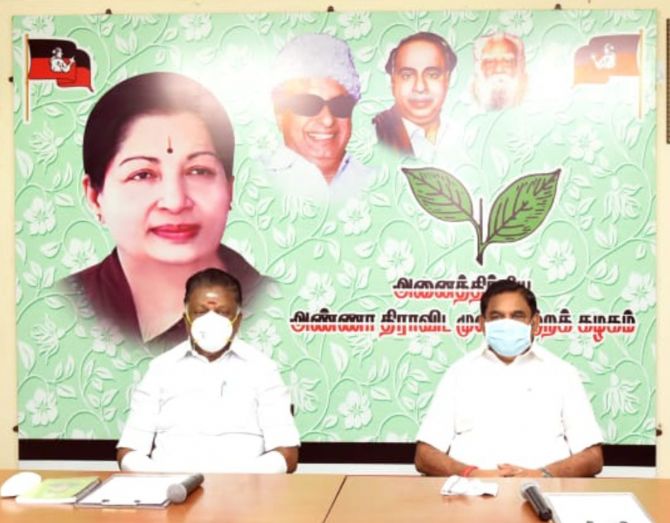 There are rumblings in Tamil Nadu'S ruling party.

The All India Anna Dravida Munnetra Kazhagam is in turmoil as Chief Minister Edappadi Karuppa Palaniswami and Deputy Chief Minister Ottakarathevar Paneerselvam have fallen out -- openly.

Tensions were always brewing between them as Paneerselvam, or OPS, felt that as he was appointed chief minister twice by former party supremo J JayalalithaA and once by her aide V K Sasikala, he had a better claim to the CM's post.

The incumbent Palaniswami was appointed chief minister by Sasikala after OPS revolted and deserted the AIADMK expecting other MLAs to follow him.

When they didN't he let himself be persuaded to return to the original AIADMK, and joined Palaniswami, or EPS, as deputy chief minister. In the party, however, he was named the coordinator, with EPS as joint coordinator.

Peace between them, however, remained tenuous. OPS was clear that he was deputy CM in 'Amma's government', since the mandate in 2016 was for her government. In the 2021 election, he was sure, he would not play second fiddle to anyone.

Things boiled over at Monday's meeting of the AIADMK's executive committee over who would be the party's CM nominee in 2021, with both clashing openly.

A truce was, however called, and the party's deputy coordinator K P Munusamy announced that the AIADMK will announce its CM candidate on October 7.

But OPS is clearly sulking. On Tuesday he skipped a meeting on Covid preparedness called by EPS and was holed up with his followers.

What will happen next week? Will the party break up over the clash of personalities?

How do you think the O Paneerselvam-Edappadi Palaniswami clash will play out?

I think some arrangement will be worked out. I don't think there will be a break between them. They will probably pull back.

Irrespective of who they declare as chief minister candidate on October 7, do you think the tensions within the party will subside?

Everybody will be jockeying for seats for their supporters. So everything will not be hunky-dory.

But both are mature enough to realise that a break will not benefit either of them and both will be losers.

Is there a chance of the party splitting after the announcement of the chief ministerial candidate?

If EPS is not sure that he will win, so he also wants some, a partial, say in party matters.

OPS is saying that he is being sidelined.

OPS has said that Prime Minister Modi had told him to merge the party and he would be deputy chief minister only for this term. Will the BJP play any part in the AIADMK's internal politics?

The BJP will definitely play a part. The last few months their relations are frosty. They have been taking pot shots at each other.

There are cases against AIADMK ministers. The BJP may use these to put pressure on them.

Their primary aim is to defeat the DMK so they need the AIADMK. In Tamil Nadu the BJP needs one of the two.

The AIADMK doesn't need the BJP. The question is whether the AIADMK is in a position to drop the BJP from the alliance.

If and when Sasikala is released, how will it impact the AIADMK?

She maybe a rallying point for some dissidents, but she does not have a mass base.

Both OPS and EPS know that letting her in will greatly weaken their influence.

Will the strained relations between the top two benefit the DMK in the assembly election?

If it reaches a break then it will benefit the DMK. Otherwise, as long as they are together and the party is united, it will not have a huge impact.

Will Palaniswami's handling of the Covid pandemic be an issue in the election?

It will definitely have an impact as the economy has been severely affected. It will have an anti-incumbency effect.

What about the three-language formula in the new education policy, which Tamil Nadu has opposed?

The three-language formula will be used by the DMK. I cannot see it making a huge impact, it could have a small impact.

The election will be a referendum on what EPS and the government have done in the last two-three years. 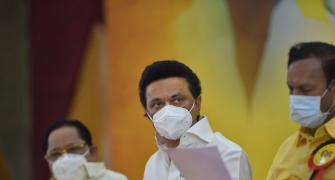 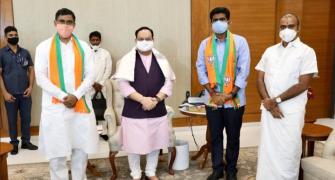 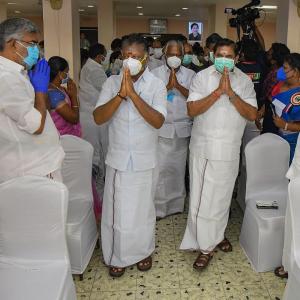 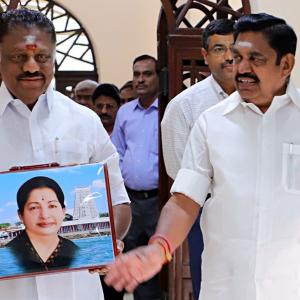